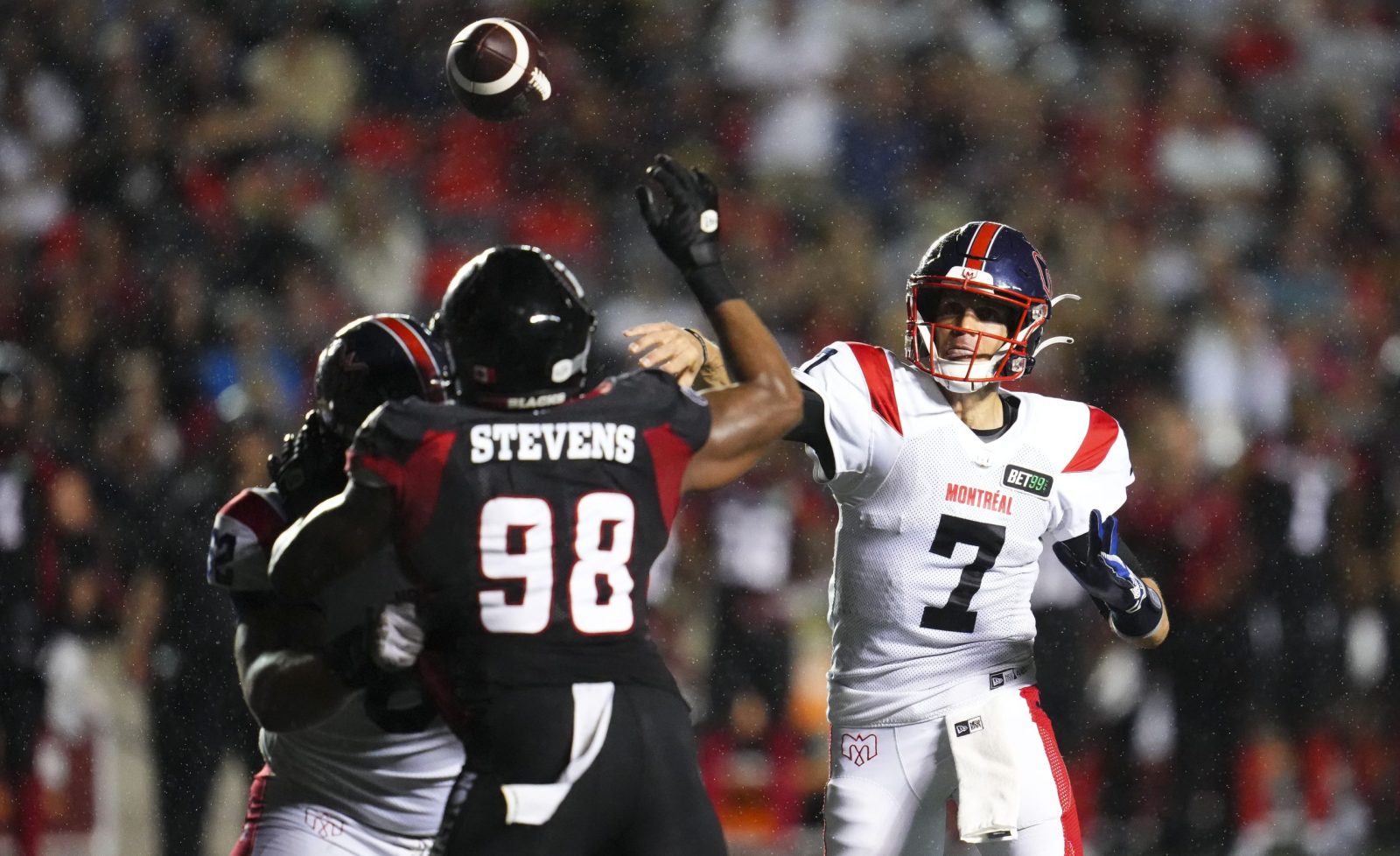 Montreal Alouettes quarterback Trevor Harris (7) makes a pass for a two-point conversion against the Ottawa Redblacks during second half CFL football action in Ottawa on Thursday, July 21, 2022. THE CANADIAN PRESS/Sean Kilpatrick

Raheem Wilson, who was signed last month, will make his first appearance as a member of the Alouettes. He spent the last three seasons with the Calgary Stampeders, where he was a starter at multiple positions in the secondary.

Wilson is coming into the lineup because veteran Najee Murray is dealing with a lower-body injury. The 28-year-old has recorded 107 tackles and three interceptions in 38 games with the Stampeders.

“(He) comes from a winning culture,” general manager and interim head coach Danny Maciocia said of Wilson. “He played in Calgary for two-and-a-half years. What I do like about him is that he can play cornerback, he can play half-back and he can play safety. He can do it on the short side of the field, he can do it on the wide side, too.”

Murray was injured early in the win over the Tiger-Cats. He didn’t participate in any of the practice sessions this week. He’s considered day-to-day for now.

Will the new guys suit up?

On Wednesday, the Alouettes made a pair of blockbuster trades. First, they sent Vernon Adams Jr. to B.C. for a first-round pick.

Hours later, they traded defensive end Avery Ellis and a third-round pick to Edmonton for defensive end Thomas Costigan and defensive back Nafees Lyon. Expect these two players to contribute on special teams and defence at some point this season, but it won’t happen on Friday night. It’s just too soon.

“We also can’t forget that (defensive coordinator) Noel Thorpe coached both of them in Edmonton last year. Those two players were must-haves for me for the second half of the season knowing that we’ll get two players that are productive. It also gives us depth. We paid the price to get them.”

There’s a chance that both players will be at Percival Molson Stadium watching from the sideline though.

Lyon is also in his second CFL season, as he suited up in five games with the Elks in 2021. The 25-year-old had two interceptions last year and he has one more in 2022.

Offensive line is mauling the opposition

The Als offensive line has battled throughout the entire season, but they seemed to have picked up their game over the last two outings. In these back-to-back wins over Winnipeg and Hamilton, the group has allowed just two quarterback sacks.

On top of protecting Harris, they’ve also taken just two penalties in the last two games, which is even more impressive when you consider they’ve played against two teams that have really good defensive fronts.

It's time to give the offensive line some love! They've been mauling opponents over the last few games! We're expecting another huge performance from the big boys up front on Friday night!

Not to take anything away from the offensive line, but the fullbacks, receivers and even the quarterback deserve credit for the protection in the passing game.

“Clearly, we’re mixing it up,” added Maciocia.  “We’re going from a six-man protection to a seven-man protection. Sometimes the receivers are coming in and they’re adding to the protection. Sometimes they’re chipping on the way out, so it’s buying some more time for the tackles to get a proper set on those defensive ends. We’re finding different ways of buying time for Trevor (Harris) because we know that if we can keep him upright and he can transfer his weight, climb into the pocket and can throw the ball down field, more often than not he’s going to be accurate. The numbers support that. You can’t throw the ball of your back.”

This will be the second of four meetings between the Alouettes and the Redblacks in 2022. Montreal beat the Redblacks in Ottawa, 40-33, on July 21st. The Als will host their division rivals again on Thanksgiving Day Monday before heading to the Nation’s Capital the following week.

Last time these two teams went head-to-head, the Redblacks’ starting quarterback was Caleb Evans, who played very well in that game. This week, Ottawa will go with Nick Arbuckle, who beat the Elks in Edmonton last week.

“For me personally, I like going up against those pocket-passers.” Veteran defensive lineman Mike Moore said. “Arbuckle is more of that pocket-passer that is looking to make plays down the field. It’s just going to be better for me to have more time to get to the quarterback.”

Yes, the Als gave up 33 points in that game, but it’s important to note that it was the defence’s second outing with Noel Thorpe as defensive coordinator. The unit looks a lot different now and they seem way more comfortable and confident on the field.

Kick-off between the Alouettes and Redblacks goes at 7:30 pm at Percival Molson Stadium.