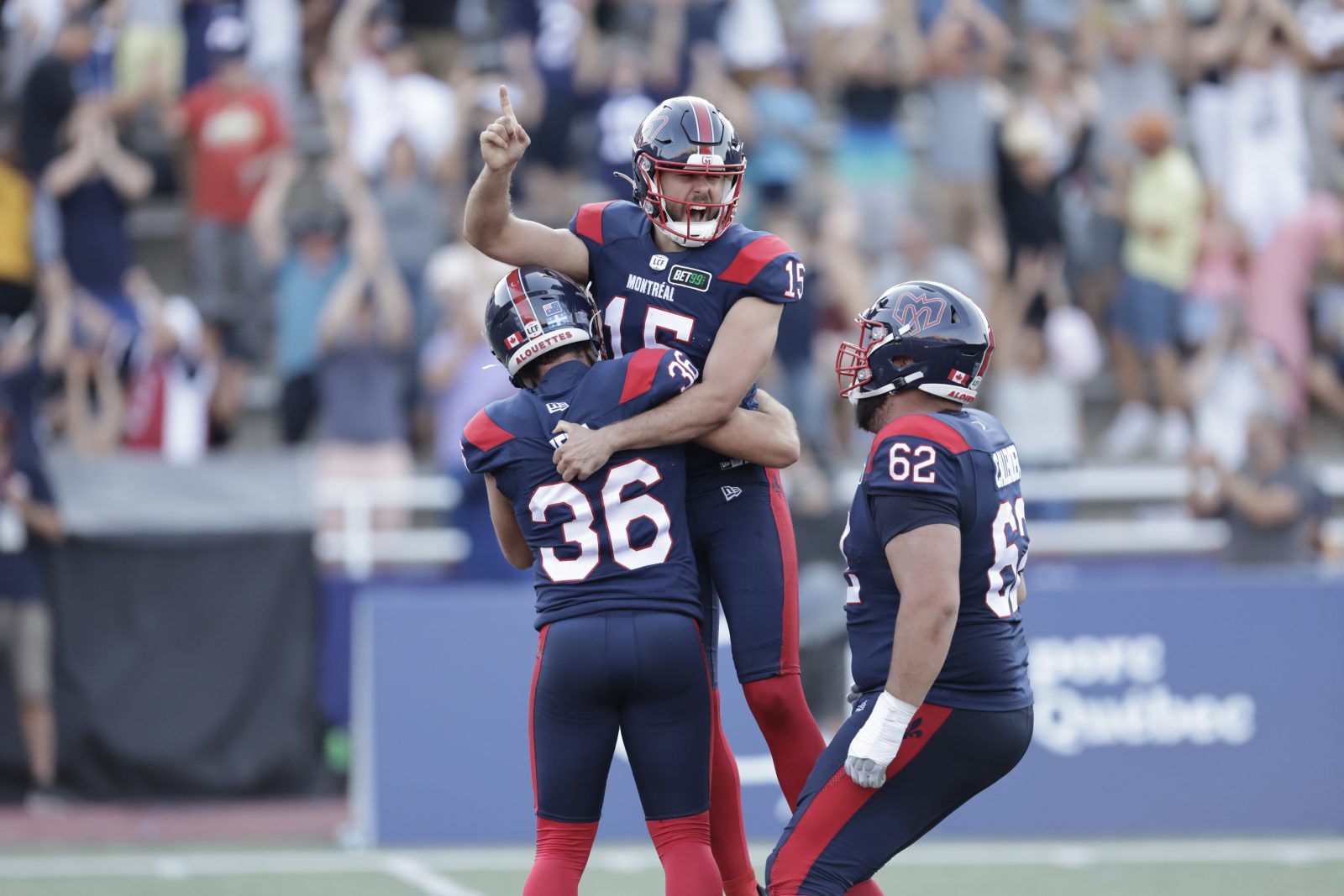 If you’re an Alouettes fan you better get used to this team playing in tight games. Saturday night’s game wasn’t always pretty, but at the end of the day the win is the only thing that means anything. The Als have now won back-to-back games for the first time all season, and with Toronto’s loss to Calgary on Saturday night, Montreal is just half a game back of first place.

If you missed the Alouettes postgame show on Facebook live, you can watch it right here: https://fb.watch/f1kdZWTRKT/

Here’s what stood out during Saturday’s, 29-28, win over the Ticats.

Cote has had a solid season. Has it been perfect? Absolutely not. But he’s delivered key kicks at important times throughout his career. Saturday was no different.

The Alouettes were down by two points with 40 seconds to go. They marched into Hamilton territory after two Trevor Harris completions to Jake Wieneke and Geno Lewis, and that’s when Cote did his thing by nailing a 48-yarder to win the game.

“I’ve always been a calm person,” Cote admitted after the game. “I’m a low-profile kind of guy. It’s something that I feel I have to do, whether it’s a good kick or a bad one, you always have to have the same mindset. At the end of the game, you can allow yourself to celebrate, but during the game you have to be in control of your emotions.”

Here’s the game-winning kick from 48 yards out. Cote also mentioned that he would have felt comfortable kicking from as far as 60 yards at the end of the game. He hit the ball so well, it probably would’ve gone through the uprights from 60.

“I’m ecstatic for him,” interim head coach and GM Danny Maciocia said of Cote. “He wears that number 15, and when I see him, whether he hits the upright, whether it’s wide or whether it’s through the uprights, it’s the same reaction from the kid. It reminds me of another number 15 that I used to coach in Edmonton, Ricky Ray.

“The fact that they’re so calm reassures everyone else on the sideline. That’s a credit to him. We believed that he’d put it through the uprights if we gave him an opportunity.”

No matter what team you cheer for, you never want to see a player go down for a while. Unfortunately, Philpot took a shot from two Hamilton players, and was very slow to get up. He went into concussion protocol. He did not return to the game.

One play after Philpot went down, the Alouettes scored their first touchdown of the game, as Trevor Harris found Geno Lewis.

Just one more note on Philpot. He was on the sideline during the game, and he also celebrated on the field with his teammates after David Cote hit the game-winning field goal.

“I feel like it kind of brought us together,” receiver Kaion Julien-Grant said of the Philpot injury. “When one of our guys goes down, we have to do it for him. We just had to stick together no matter what. We had our ups and our downs, but we just had to stick to it and finish hard.”

Trevor Harris and the offence delivered:

Lewis is clearly one of the elite receivers in the CFL. The Alouettes are dangerous when they can get the ball in his hands early and often, but this offence is even more dynamic when Harris can spread the ball around.

Lewis finished with seven catches for 99 yards, White had three for 81, Julien-Grant had three for 74, Philpot had three for 51, Wieneke (3), Hergy Mayala (2), Walter Fletcher (2) and Christophe Normand (1) also caught passes in this game.

The 36-year-old went 24-for-31 with 382 yards passing, three touchdowns and one interception.

He was particularly impressive in obvious passing situations late in the game. When the Als were down six with under three minutes to go, he was able to find White Jr. for the go-ahead score.

On the final possession, when the team was down by two points, he made two huge throws to get the team in to field goal range.

The Ticats defence knew the Als had to throw the ball, the entire stadium knew it, and Harris still found a way to complete key passes. You have to tip your hat to the veteran.

A win is a win. The two points in the standings is all that matters, but it was far from perfect at times. Penalties made this game more complicated than it needed to be. Several penalties allowed the Ticats to extend their drives on offence. Hamilton also scored points on those drives.

In the end, the team finished with 13 penalties for 176 yards, including two roughing the kicker penalties on special teams. That’s a part of the game they’re going to have to address after the bye week.

The thing I appreciate about the situation is that the Als didn’t fold. They could’ve thrown in the towel when things started to get difficult in the third quarter, but they stayed focused, and they were able to strike when it mattered most. Winning while overcoming adversity is always good.

The Alouettes will head into their bye week with a 4-6 record, which puts them second in the East Division behind Toronto (4-5). The Argos will play the Ticats next week.

The Als are back in action on Friday, Sep. 2 at Percival Molson Stadium against the Ottawa Redblacks.