Preview: Alouettes look to hand Bombers their first loss of 2022 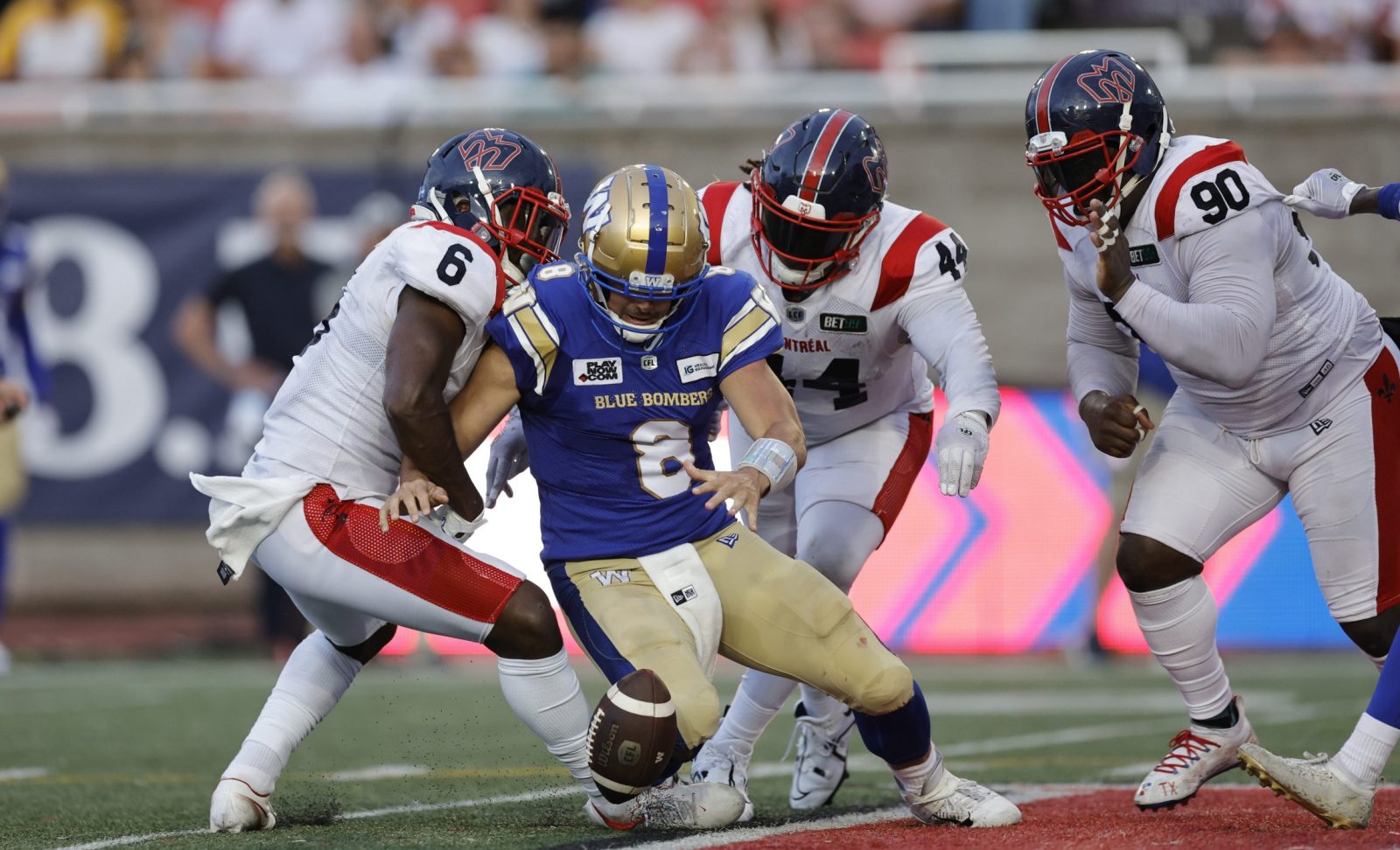 Preview: Alouettes look to hand Bombers their first loss of 2022

The Alouettes and Winnipeg Blue Bombers will go head-to-head for the second week in a row. Last week, the Bombers topped the Als, 35-20, at Percival Molson Stadium. The team hung in there for most of the night, as the score was tied, 14-14, in the fourth quarter. But the Bombers managed to prevail thanks to some more offensive production and a touchdown on special teams.

How do the Als get over the hump against this undefeated Winnipeg side? What changes will be made to the lineup?

Here’s everything you need to know about Thursday night’s clash:

Trevor Harris (back) will play:

Although Trevor Harris was limited in practice all week, he will be the starting quarterback in the rematch against the Bombers.

According to head coach and GM Danny Maciocia, this was the plan they laid out for Harris going into this week. They wanted to make sure he threw the ball at least a little bit during the week, but they wanted to limit the amount of time he spent doing work on the field.

“He could’ve practiced in full today,” Maciocia admitted on Tuesday. “It was our decision to give him the day off and to go through his mental reps in order to get ready for Thursday’s game.”

Harris admitted that he tweaked his back late in the game in Hamilton two weeks ago, and the injury flared up on him again after the first Winnipeg game. The good news for Harris and the Als is that they’ll be able to get some additional rest after this week’s game because they’ll only play again next Saturday at home against the Ticats.

Fellow quarterback Vernon Adams Jr. (elbow) is still on the six-game injured list, which means that Dominique Davis and Davis Alexander will back up Harris for the third week in a row.

One change in the secondary:

Starting defensive back Rodney Randle Jr. (hip) did not practice all week. He will miss Thursday night’s game, and he’ll be replaced by Kenneth Durden.

Durden attended training camp with the Als in 2022, but he was released. The team brought him back to Montreal a few weeks ago after they released Herb Waters from the practice roster.

The 30-year-old has a lot of NFL experience, as he spent time with the Tennessee Titans (twice), the Oakland Raiders and the New York Giants.

This will be Durden’s first career CFL start.

How much will Pier-Olivier Lestage play?

According to the Alouettes depth chart, the starting offensive line will remain intact. Nick Callender will play left tackle, Phil Gagnon will play left guard, Sean Jamieson will start at centre, while Kristian Matte and Landon Rice will complete the right side. That doesn’t mean that there won’t be changes throughout the game.

In just his second week with the team, Lestage saw more reps with the starting offence over the last three days. He lined up at both left and right guard throughout the week.

Winnipeg isn’t an easy place to play for any offensive line, as the crowd is always a factor. The Als offence did some work on their silent snap count because there’s a good chance they won’t be able to hear themselves when they step on the turf at IG Field.

Our reporter @joeyalfieri brings you all the news and notes ahead of tomorrow night’s game in lovely Winnipeg! pic.twitter.com/vWnqV4ASbH

Starting safety Marc-Antoine Dequoy managed to come away with his third interception of the season during last week’s loss to Winnipeg.

Nobody in the CFL has more interceptions than Dequoy, but seven other players also have three picks. Those seven other players are all American and they’re either corners, defensive halfbacks, or SAM linebackers. Dequoy is the only safety and only Canadian on the list.

This is Dequoy’s first season as a starter at the pro level and it’s really the first time he’s played safety for an extended period of time. In his days at the University of Montreal, the 27-year-old played defensive back on the wide side of the field.

As a unit, the defence played relatively well last Thursday night. They managed to collect three interceptions in total and they also forced a fumble. This was clearly the defence’s best game under new defensive coordinator Noel Thorpe.

“It’s tough not to have a training camp with your coordinator,” Dequoy said. “Defence is (Thorpe’s) identity. With the change, we had to figure things out. I think we’re starting to turn the corner in that regard. We’ve done some positive things. It’s always improving.

“There may be some ups and some downs but you want to see progress.”

They’re talented, relentless, they don’t fold in crunch time, and they simply know how to win. Even though they turned the ball over four times on the road at Percival Molson Stadium last week, they hung in there and found a way to win.

To beat them on their home field, the Als are going to have to play smart mistake-free football for close to 60 minutes.

Tyson Philpot est en 🔥🔥 On vous suggère de garder un œil sur lui jeudi lors de notre revanche contre les Bombers !@Tysonphilpot is on 🔥🔥 We suggest you keep an eye on him Thursday during our rematch against the Bombers! pic.twitter.com/IqX974IXhl