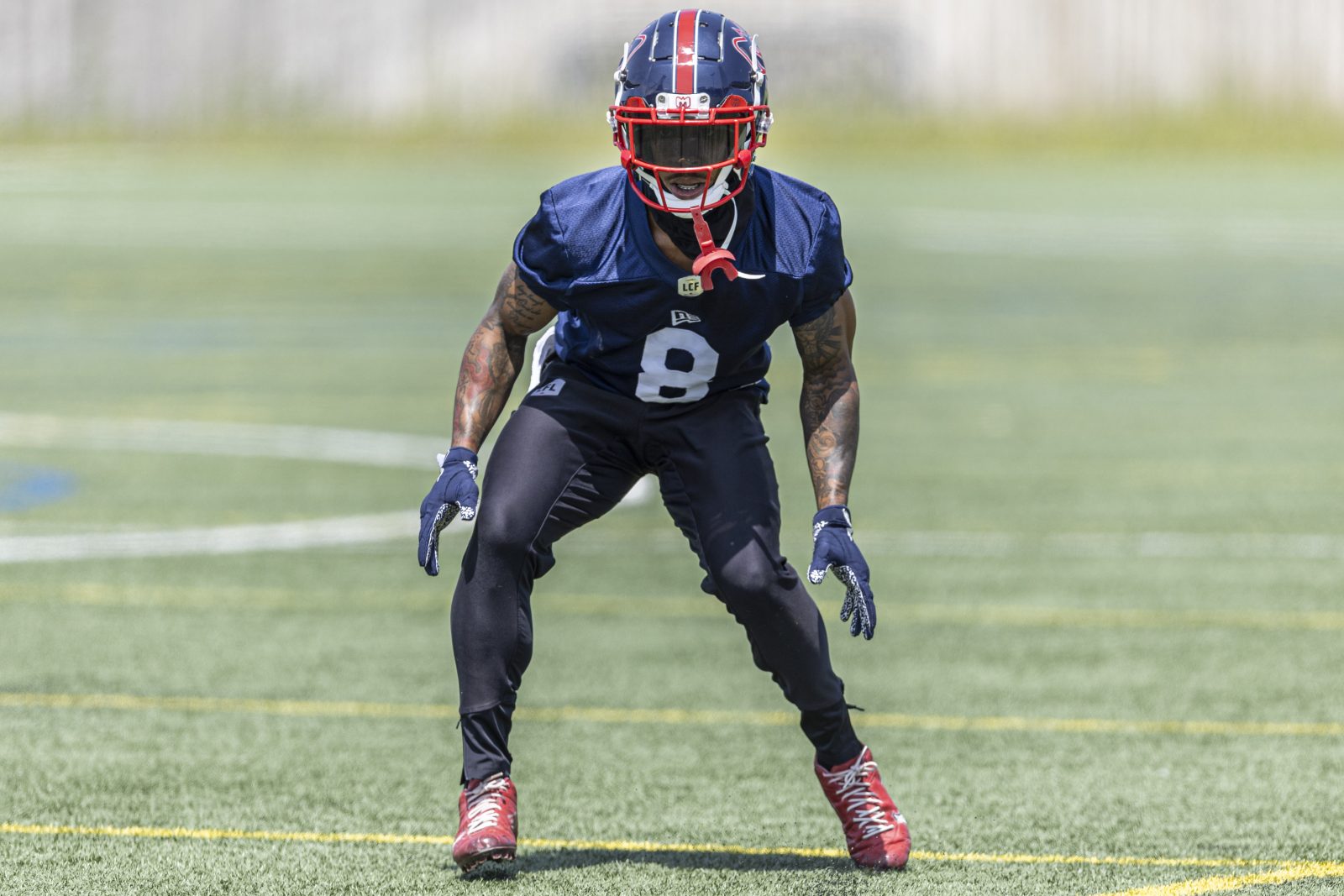 JONES, MIKE #8 of the Montreal Alouettes

Alouettes cornerback Mike Jones had a huge decision to make last February. After winning back-to-back Grey Cups with the Winnipeg Blue Bombers in 2019 and 2021, the free agent decided to sign the Bombers to join the Als.

Jones was a key contributor for Winnipeg, as he played several different positions on one of the best defences in the CFL. Now, in his first season with Montreal, he’s settled in nicely at corner for the Als. In eight games with his new team, the 26-year-old has accumulated 22 defensive tackles, one on special teams and an interception. He’s also been one of the most consistent defensive backs in coverage for the Als in 2022.

“I wouldn’t say it was difficult (to leave the Bombers organization),” Jones admitted. “I just felt like I needed to open the eyes of other coaches. I had been around those guys for three years; it was time for me to flourish on my own. Getting out there and being the player I know I can be and show my talent. That was pretty much all I wanted to do.”

Thursday’s game at IG Field will be the first time Jones plays his old team on their turf since he joined the Als last winter. Although he downplayed the personal significance of his return to Winnipeg, Jones did mention that he learned a lot from his time with the organization. That’s not surprising considering the amount of success they’ve had since 2019.

“(I learned how to become) an organized player,” he said. “Getting to meetings on time, how to dissect film, being where I needed to be on the field at the right time, executing assignments, being that teammate in the locker room.

“When I’m in the locker room, I try to instill a lot of the things that I learned in Winnipeg. Right now, I’m just trying to keep being active on that end and go from there.”

After going 28 years without a Grey Cup win, the Bombers have won each of the last two championships. They’ve compiled a 31-10 record during the regular season since 2019 and they’ve gone 5-0 in the postseason.

“They’re a successful organization because they’re organized,” he said of the Bombers. “They’re on time, they’re on point with everything. They’ve got some good guys and some good coaching over there. That’s really what keeps them in the winning race right now.”

Although the Als dropped a 35-20 decision at home to Winnipeg last Thursday night, there were some positives that came out of that game. The most notable one was the defence, as defensive coordinator Noel Thorpe’s unit came away with three interceptions and a forced fumble.

Of course, it’s frustrating to force four turnovers and still lose, and there’s no guarantee that the unit will be able to get that kind of production against the Winnipeg offence, which is led by last year’s Most Outstanding Player, Zach Collaros.

The defence kept Collaros in check for the most part, as the Bomber quarterback finished the night 15-for-26 with 210 yards passing, two touchdowns and three picks. He was also stripped by linebacker Adarius Pickett.

“I will say that Collaros will put the ball where it needs to be,” added Baltimore native. “He’s an active quarterback. He can roll in and out of the pocket, he can put balls where they need to be, and he can side-arm the ball. He does have some good qualities, but it’s nothing that can’t be broken or can’t intercepted, like you saw in last week’s game.”

Don’t be surprised if there are some changes in the Alouettes secondary on Thursday night. Wes Sutton, who picked off Collaros in the first quarter last week, didn’t practice on Sunday and was limited on Monday due to a head injury. He has a chance to suit up against the Bombers. Rodney Randle Jr. (hip) sat out on Sunday, Monday and Tuesday.