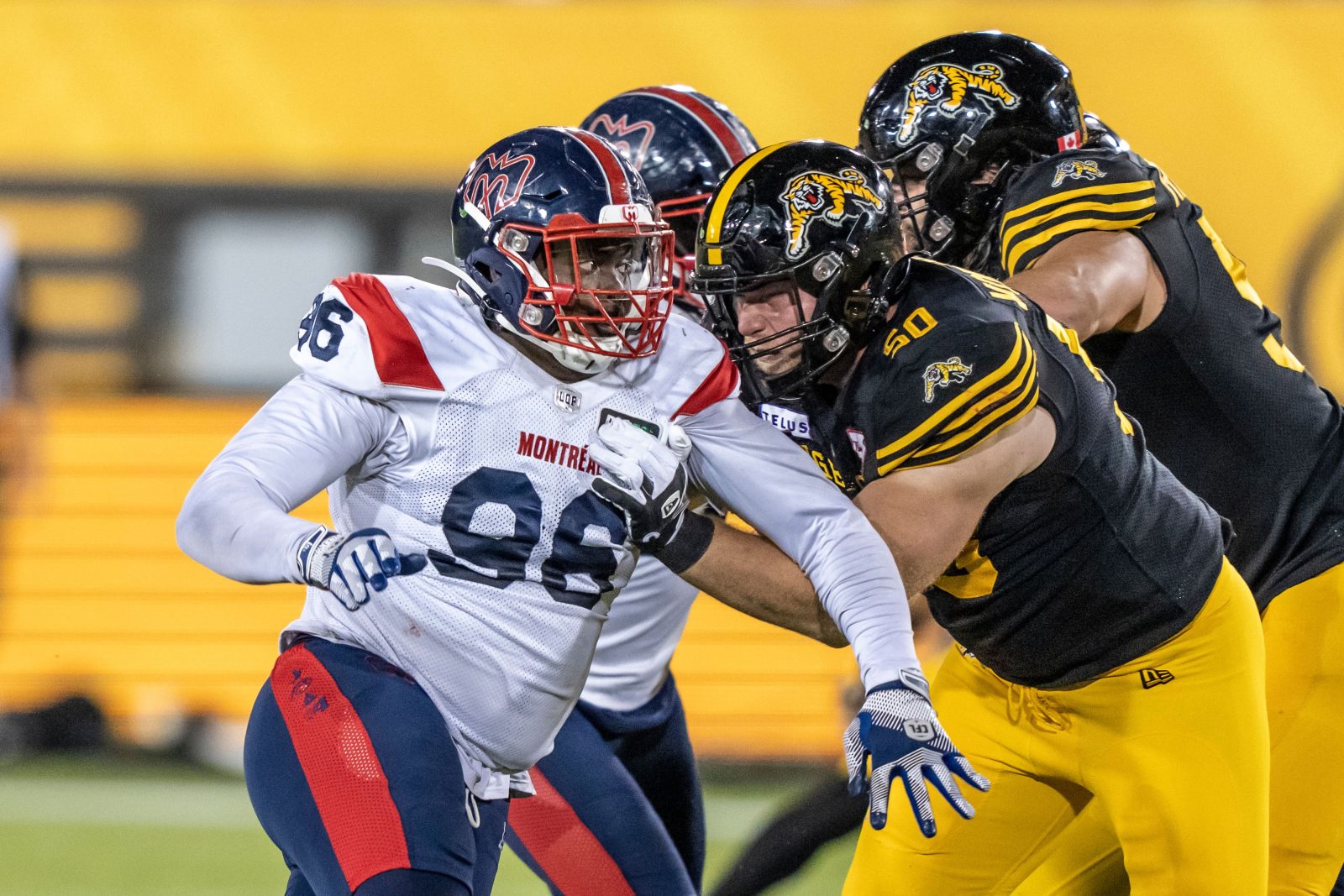 Another day, another game that comes down to the wire involving the Montreal Alouettes. Unfortunately for the Als, they came up just short in their bid for a comeback win at Tim Horton’s Field in Hamilton on Thursday night.

ICYMI: You can watch the Als postgame show on Facebook Live.

-Defensive Battle in the First Half:

These two teams combined to score just 16 points in the opening 30 minutes of this clash.

The wind was a factor for both teams in the opening half, as the Als had it in the first quarter while the Ticats had it in the second. Unfortunately for Montreal, they only managed to score three points with the win. The Ticats scored 10 but did most of the damage on the scoring drive with the wind in their faces.

“In the first half, we kind of felt the energy pick up,” fullback Christophe Normand said. “We played relatively well in the opening half, but we kept the Tiger-Cats in the game. We didn’t produce much offensively, defensively things were going pretty well, the special teams battle was pretty even. Honestly, it came down to a couple of mistakes at the end of the game that we should have capitalized on.”

The third quarter performance by both teams proved to be the difference in this game. The Ticats came out of the break energized and managed to move the ball, while the Als opened the half with a two-and-out and didn’t really find their footing until the end of the frame.

Even though the Alouettes made the game very interesting in the fourth quarter, it’s difficult to climb out of the hole they made for themselves in the third. Doing so on the road is even more challenging.

If anyone was worried about Chandler Worthy after last week’s game in Ottawa, he put those doubts to bed very early on. Worthy came up with key return after key return throughout the game.

The Als returner helped set up a first-half field goal by returning a punt to the Hamilton 25-yard line.

Chandler Worthy showing early on that he's still HIM on the return game!#CFLGameday | @MTLAlouettes pic.twitter.com/civfLDvT6M

Unfortunately for Worthy, he was forced to leave the game in the fourth quarter when the Als were making their comeback.

In his absence, rookie Tyson Philpot did an incredible job on a late return, where he fielded a punt off the bounce deep in Montreal territory before cutting to his right and picking up 58 yards. That would be an impressive accomplishment for any fil-in returner, but it stands out even more because he’s a 22-year-old first-year pro.

Of course, we can’t talk about the special teams without mentioning Normand’s huge 21-yard pick up on third and 13 with the Als trailing, 24-6. The Ticats had all the momentum at that point, but that swung it Montreal’s way. They managed to pick up a field goal to cut the deficit to 24-9.

“It was an opportunity to try a trick play,” Normand said after the game. “It allowed us to get an extra possession. With Byron (Archambault) and Danny (Maciocia), we can pull off surprises like that.

“The coaches decided to try it. They saw that there might be an opening for a play like that based on statistics and the film. It was a perfect opportunity to try that.”

-The battle of the trenches:

The trenches aren’t necessarily the sexiest area of the field, but that’s often where games are won and lost.

On Thursday night, the Alouettes failed to register a quarterback sack, while the Ticats were credited with five, including back-to-back sacks on two consecutive plays in the first half.

There wasn’t much Harris could do on most of the sacks. The pressure seemed to be in his face almost immediate fairly often, so it’s hard to place blame on the quarterback in that situation.

And, obviously, when you have an offence that’s based on timing, it’s tough for everyone to get on the same page when the quarterback is pressured early and often.

-Was it the right decision to take Trevor Harris out of the game?

There’s no easy answer to that question. Harris was forced to scramble forward late in regulation and he absorbed a huge hit from a Ticats defender Stavros Katsantonis. The Ticats defensive back was flagged for unnecessary roughness on the play, which moved the ball to the Hamilton 21-yard line with Montreal trailing by seven points.

Because the hit was high and the Als quarterback was slow to get up, the CFL’s concussion spotters forced Harris to exit the game with eight seconds remaining.

The 36-year-old walked off the field on his power and was visibly frustrated by the league’s decision.

“I think that it was pretty messed up that they pulled me off the field there at the end,” Harris told reporters after the game. “But it’s out of my control. I wish that they would come and ask the player what’s going on. They didn’t know what hurt and they just assumed that it’s your head and it’s a concussion. That really sucks in that situation because it was the pivotal moment of the game.

“It’s not my head. Something else hurt, but I know I could play through that. That’s why I got up and was ready to play. I was calling the play in the huddle, but that stinks.”

I understand Harris’ frustration, especially because he didn’t suffer a head injury on the play. It would be great for there to be a little more dialogue between the referees, the players and potentially the spotter, but it would be tough to orchestrate all that during a game.

I also realize that the league is looking out for each player’s health and safety. It’s a difficult way to lose a game though.

In the end, it’s hard to determine whether or not anyone was right or wrong in this situation.

The Alouettes will now return home to take on the Winnipeg Blue Bombers in a home-and-home series. They’ll host the defending Grey Cup champions at Molson Stadium next Thursday. They’ll follow that up with a trip to Winnipeg on Aug. 11.