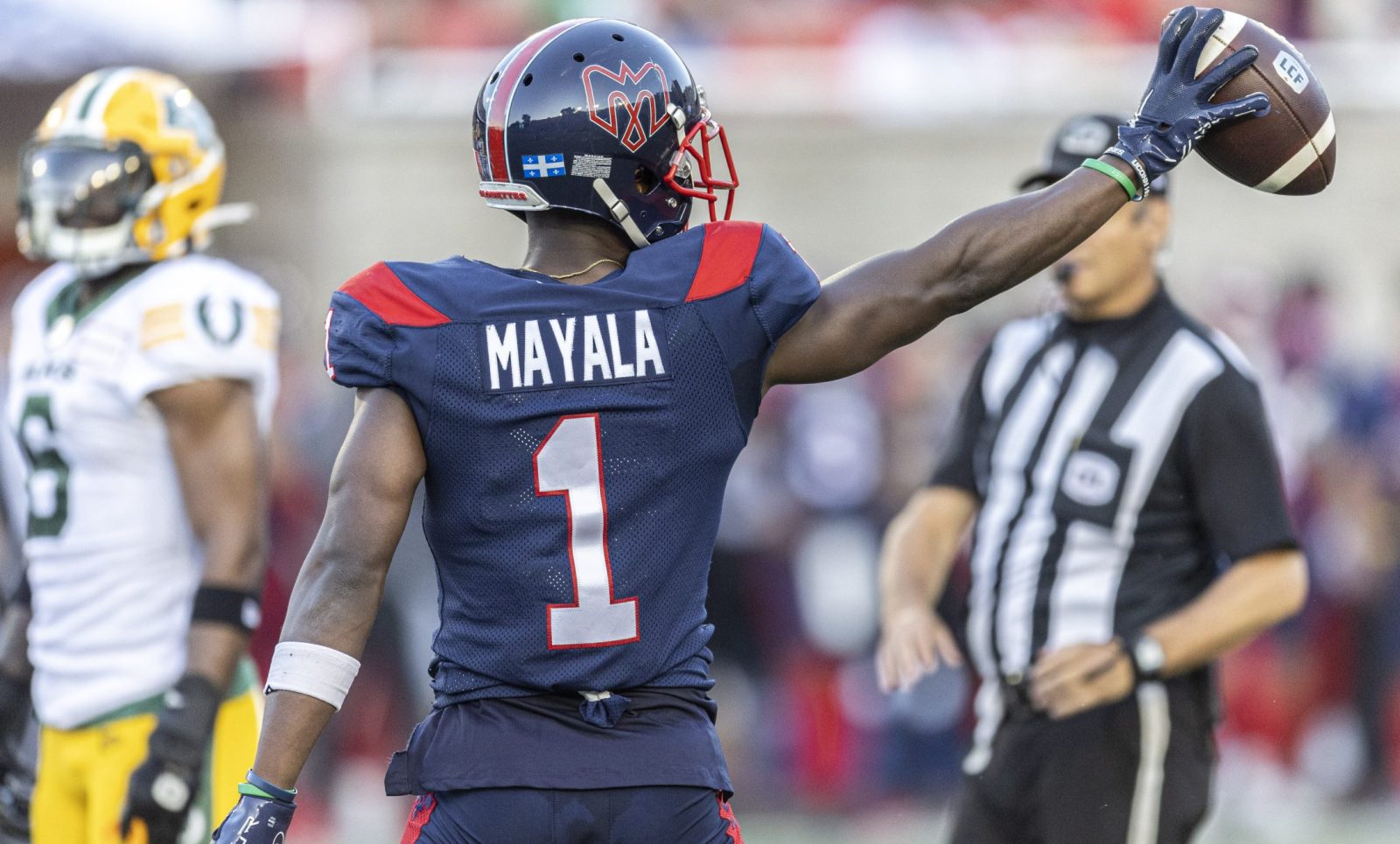 MAYALA, HERGY #1 of the Montreal Alouettes

Expectations were high for receiver Hergy Mayala when he inked a free-agent contract with the Alouettes this winter. The 26-year-old had made some important plays throughout the first five games of the season, but he had his first monster performance as an Alouette last Thursday night in Ottawa.

Mayala finished the game with 102 yards and a touchdown on five receptions against the Redblacks. That was the third best performance of his pro career, as he managed to pick up 116 and 103 yards in a pair of games against Montreal and B.C. during his rookie season with the Calgary Stampeders in 2019.

“To me it meant a lot,” Mayala said of his performance against Ottawa. “I felt like I came here, it’s been five or six (games) now, and I feel like I stayed true to the grind. I’ve been going out there and showing what I’ve got.

“I feel like the work I put in is not going to waste.”

5 catches, 102 yards and a touchdown…what a performance by Hergy Mayala during Thursday's win over the Redblacks! How would you describe his body of work in the game? #montreals pic.twitter.com/aEej7DxUBK

Through five games with the Als, he had never topped more than 33 yards and he had 99 in total going into Thursday’s game. In previous years, Mayala may have been discouraged by his early-season numbers, but he’s learned to stick with the process.

“When I was younger, it was (harder to stick it),” he added after Sunday’s practice. “But now I’m a little older. I’ve been through a lot.

“When you stay true to the grind, eventually it’s going to pay off, but you just can’t quit. That’s something that I’ve learned. I just go about my business like that every day now.”

The Montrealer has gone through some adversity early in his career. After posting 562 yards in his rookie season, he had just 284 yards in his second year with Calgary. Part of the reason he decided to sign with his hometown team is because he felt they had plan for him and that they were committed to utilizing him more offensively.

Mayala admitted that since Anthony Calvillo took over play-calling two weeks ago, he feels like there’s a more concerted effort to get him the football.

“I definitely feel it,” he said. “I feel like now there’s a lot of movement as you guys have seen, and it puts guys in different positions. It gives different guys the opportunity to do the things that they’re good at.”

One of the other positives that has come out of the last two performances is the improvement in the red zone. Mayala was the beneficiary of a Trevor Harris touchdown pass from the four-yard line. That was one of five red-zone touchdowns scored by the Als in the game. They also added four red-zone majors against Edmonton the previous week. That’s a big change from the team that went 5-for-14 in the red zone in the first four games.

“For us, it was just about getting in there,” Mayala said. “I felt like a lot of times we’d get in there and get stopped, and now we get there, and the mentality isn’t to come out with three (points), it’s about coming out with six (points), and I feel like we’re doing a good job. We’re 9-for-11 (in the last two games), but I feel like we could be 11-of-11.”

Another reason he decided to sign with the Alouettes is because he wanted to be closer to his family. In fact, his mom attends practice near Olympic Stadium most days. She also helps look after some of the children of other player’s who attend practice.

“Now that we’re back home, it’s a little easier (for her to come to practice),” added Mayala. “She gets here because the rest of the family – my sisters and my brother – are working right now. She doesn’t start (working) until later, so she gets a chance to come here every time.

“The biggest thing is seeing my nieces every game. Wins or losses, I go see them. All they want to do is play around and sit there. For me, that’s a great feeling. It kind of takes my mind off of football, and that’s something I didn’t have earlier in my career.”

It’s a helmet AND a hanger pic.twitter.com/ODPCaOXrlL

-On Sunday, the Alouettes announced that starting centre Sean Jamieson had been activated from the six-game injured list. He should start against the Ticats on Thursday night.

-Linebacker Tyrell Richards was placed on the six-game injured list with a knee injury.