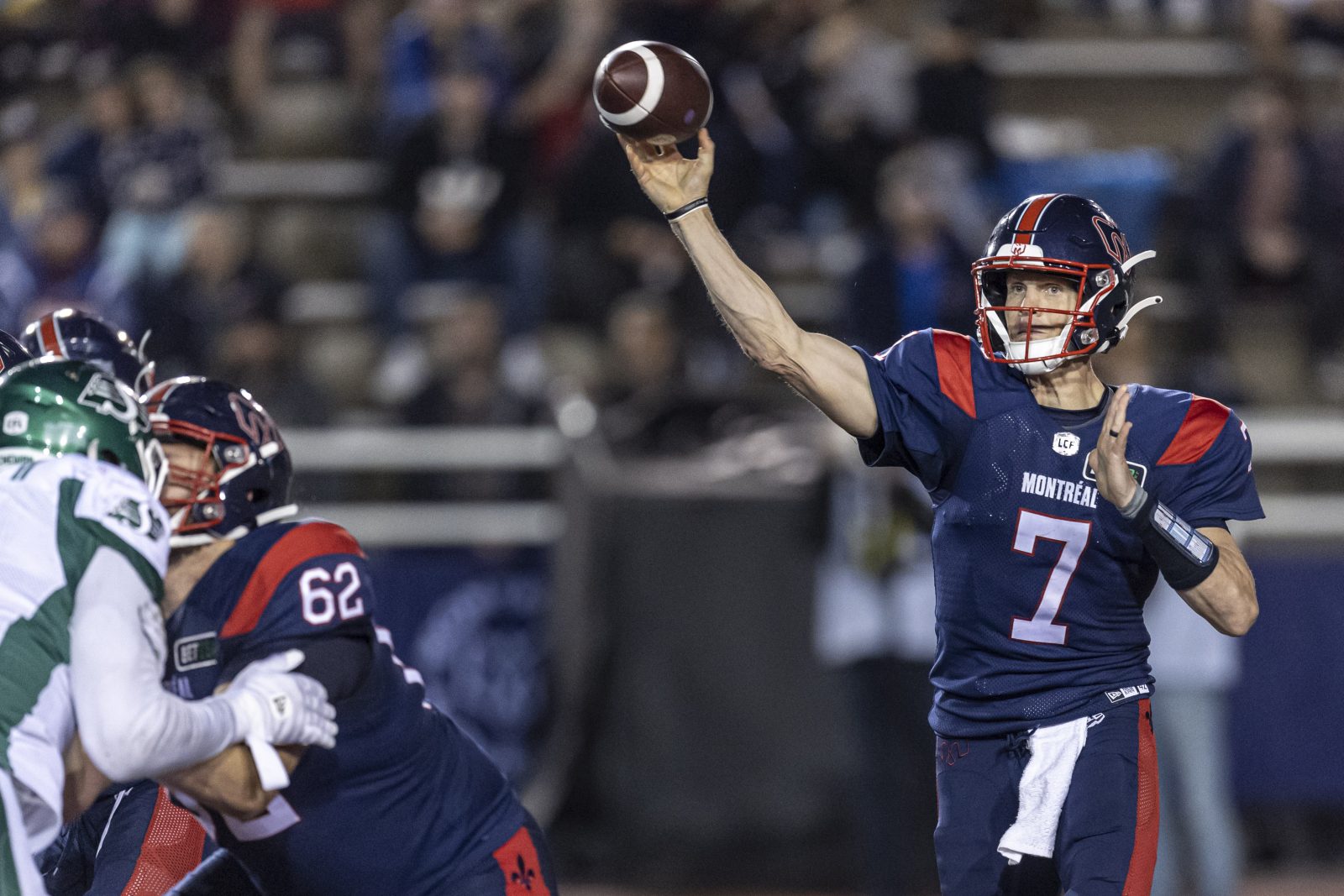 HARRIS, TREVOR #7 of the Montreal Alouettes

On Thursday night, the Alouettes put together one of the most impressive performances we’ve seen from a CFL team this season. They were clicking on offence, defence and special teams and it led to them pulverizing the Saskatchewan Roughriders, 37-13, in the home opener at Percival Molson Stadium.

How did they get it done? Let’s break it down!

You can also watch the official Montreal Alouettes postgame show by clicking the link below:

Chanlder Worthy starts the game with a BANG:

It’s impossible to ignore what Worthy did in this game. First, he opened the game with an 88-yard kickoff return for a touchdown. If that doesn’t spark you, you’re dead inside! That moment set the tone for the entire game. The Als grabbed the lead because of that play, and they never looked back. The Riders looked stunned, and they were never able to shake off that gut-punch.

We hope you had time to find your seat 😅@MTLAlouettes take the opening kickoff to the 🏠#CFLGameday pic.twitter.com/guzfgiM87A

I like the way veteran defensive end Nick Usher described the play to me during the Alouettes post-game show on Facebook Live.

“It took (Saskatchewan’s) soul, man,” Usher told me after the win. “It’s a soul-snatcher. We ate off it and we kept it up there and kept going. We got a win off it. I appreciate him. (Worthy) had a day!”

The Als brought back a second kick for a touchdown in the third quarter, but it was called back because of an illegal block by fullback Alexandre Gagne. Head coach Khari Jones challenged the penalty, but the referees decided not to overturn it.

I know the coaches and players can’t say this because they’d get fined, but I thought the penalty on Gagne was incredibly weak. Does he place a hand on the Riders’ back? Yes. Does he push him with any kind of force? No way.

Let’s also give credit to new special teams coordinator Byron Archambault. He was given the job roughly two weeks before the start of training camp, which didn’t give him much time to put a game plan together for the season. The unit has look solid and disciplined through three games. Tonight, they even came up with several big plays.

Worthy returned two kickoffs for 112 yards, and he added 93 yards on five punt returns (his longest was 41 yards).

How can you not feel good for Cote?

One week after missing what would have been the game-winning field goal in Toronto, he bounces back by making all five of his attempts.

“It went really well tonight,” Cote said after the game. “We had a really nice team win. For myself, I was due for a good performance. Five for five, I can’t really ask for much more than that. Then you add the win at home, and it ended up being a really nice night.

“This week wasn’t easy for me. It was difficult, but I got a lot of support from my teammates, the coaching staff and the front office. Those people were all behind me. It was easy to turn the page knowing that I had their confidence made it easier for me to concentrate on kicking the ball. I think I proved tonight that I can bounce back after a tough performance in Toronto.”

Starting quarterback Trevor Harris finished the night 16 of 22 for 262 yards passing, one touchdown and no interceptions. Those are solid numbers. 141 of the 262 yards came on two passes. The first one was a 70-yard bomb to Kaion Julien-Grant, who scored his first career touchdown on the play.

Julien-Grant started for the Als last season, but he didn’t see many targets. He finished the 2021 campaign with eight receptions for 133 yards. In this game, he had 75 yards on two receptions, including the one I mentioned above.

“I kept beating (the Riders) in press coverage,” Julien-Grant explained. “And then Trevor said: ‘if he presses you again, I’m just going to throw it.’ I was like: ‘Yeah, just throw it as far as you can and I’m going to run under it.’ He was like: ‘I might just throw it high’ but I just told him to trust that I would run under it.”

Rookie Tyson Philpot came up with his first career CFL reception late in the third quarter when he took a hitch screen up the field for a 66-yard gain. The youngster showed great speed, burst and vision on the play.

Oh, by the way, Philpot was able to draw an additional 15 yards on the play because the Riders defender took him down with a horse collar tackle.

It was his only reception of the game, but it was nice to see him get involved on offence.

The front-seven came to play:

As much as I’d like to single guys out for their outstanding performances in this game, I have to show some love to the entire group. They found a way to sack Riders quarterback Cody Fajardo eight times and they also put him under duress very often.

“First of all, I have to give a shoutout to the coaching staff,” Harelimana, who replaced the injured Chris Ackie tonight, admitted after the game. “They had a great gameplan and we were able to execute it. We also have high expectations for ourselves. We have a defensive front that’s tough to deal with. We have to find a way to get to the quarterback during games and we were able to capitalize on that today. We have to build on that in the coming weeks.”

The Riders were down by 20 points heading into the third quarter, but they opened the frame with a long drive that took them down to the Als’ five-yard line. On first down, Wakefield shut down the Riders running play. On second down, Sewell put an end to the Saskatchewan drive.

And, of course, getting that much pressure on the opposing quarterback makes life a lot easier for the secondary.

The secondary did its part:

It’s impossible to ignore the work that the secondary did in this game. Yes, the pressure on Fajardo helped them, but they did their part. The Als’ defensive backfield came up with three interceptions and they limited the Riders starting quarterback to just 191 yards passing.

The interception most people will be talking about at St-Jean Baptiste parties is the one picked up by Marc-Antoine Dequoy. Not only did the local product snag his first career INT, but he also brought it back for a touchdown.

Wakefield from one house to another for the pick 6!#CFLGameday pic.twitter.com/xKU3aQAurg

We also have his celebration on the sidelines:

Dequoy has really grown as a player. Sure, he relies on his elite speed to make plays, but he reads the game well too. He continues to improve as a safety and if he can stay healthy, he’ll continue to be a difference-maker at that position.

Mike Jones and Darius Williams also came up with second-half interceptions during this game.

As much as the picks were important, I also have to mention defensive back Najee Murray’s performance on Thursday night. Murray missed the game in Calgary because of a lower-body injury he suffered during the preseason. He dressed in last week’s game against Toronto but didn’t play very much. He made a difference in this game though, as he came up with five tackles and a couple of pass knockdowns. The 28-year-old has become a huge part of this defence.

The Als and Riders will go head-to-head in Regina on July 2nd. Beating teams back-to-back is never easy, but this could be the start of something special for this group.