Antwi ready to fill in for injured Stanback 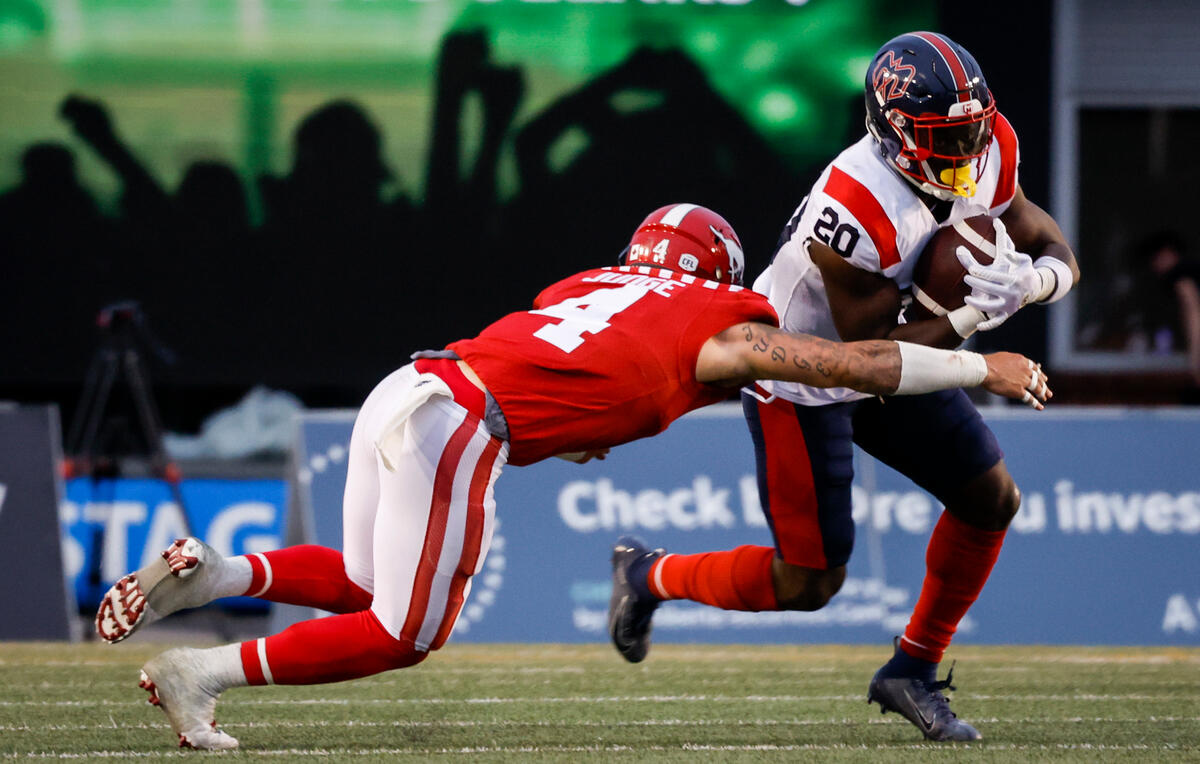 Antwi ready to fill in for injured Stanback

Heading into the 2022 season, Canadian running back Jeshrun Antwi was supposed to have a bigger role on special teams than on offence. But as is often the case in football, one play can change the course of an entire season.

On Thursday night in Calgary, star tailback William Stanback suffered a fractured ankle. He underwent surgery on Monday. With Stanback out for a while, there will be carries available to other players on the roster, including Antwi.

The 24-year-old is expected to get the start at running back against the Toronto Argonauts this week. Soon after Stanback exited the game in Calgary, Antwi ripped off a 70-yard run. He finished the night with 98 yards on seven carries and he added three receptions on four targets for 16 yards. Even though those numbers look good on the surface, he admitted that he missed some assignments in the game.

“I felt I did well,” Antwi said after Sunday’s practice at Percival Molson Stadium. “After watching the film, there were some plays where I could have done a little bit more, but with everything going on, the adrenaline, the situation, the frustration with having Will (Stanback) out, there was a lot going. There were some missed assignments here and there, but I’m looking forward to rectifying that in the next game.”

The Als added former Winnipeg Blue Bombers running back Shane Simpson to the roster on Sunday. He was at practice, but it’s unclear how much action he’ll see in this week’s game in Toronto.

Path to the CFL

Antwi’s path to the CFL and Montreal is as unique as it gets.

He was born in Israel and spent the first five years of his life there. Eventually, he moved to Ghana with his family. In 2005, after his parents separated, Antwi’s mother, Ama Kesewaa, moved to Toronto in 2005. Antwi and his older sister stayed behind in Ghana.

In 2010, when he was 12 years old, Antwi and his sister came to Canada to live with their mother, but they bounced around the country. When they first arrived in the Great White North, they lived in Toronto. Kesewaa then moved them to Calgary as she looked for the best employment opportunity for herself. The family moved to Montreal for one year in 2012 because she had a friend in the province, but she didn’t feel it was the best fit for her. She decided to move the family back to Calgary.

While in Montreal, Antwi and his family lived in Pierrefonds, and he attended Dorval-Jean-XXIII high school where he learned a little bit of French, which he still works on to this day.

“I loved living in Montreal,” he said. “If it was up to me, I would have stayed in Montreal. They say everything happens for a reason, but who knows? My football career could’ve ended up very differently had I stayed in Montreal. When I got drafted, I was just grateful to be drafted by Montreal. I loved my time here and I really looked forward to coming back.”

Before he was drafted by the Als in the sixth round of the 2019 draft and before he played university football with the Calgary Dinos, Antwi had to start playing the sport.

It wasn’t until he was in grade 10 at Father Lacombe High School in Southeast Calgary that he began playing. He credits four people with getting him into football and pushing him to improve.  Kate Miller, who was the principal at the high school, and her husband, Kevin, made a huge impact on Antwi’s life and his football journey. So did his Physical Education teacher Ian Couture and his English teacher Matt Sauer. Each one of those people helped him discover the sport he now plays professionally.

“They took me under their wing,” Antwi said of the Miller family.

“They would sign me up for camps for me to get my football knowledge and experience up because I only started playing football in grade 10. They would ensure that I would get the exposure I needed.”

Eventually, Antwi realized that he was talented enough to play at a higher level. He was recruited by several schools, including the University of Calgary, where he starred from 2015 to 2019. During his final year there, he helped the Dinos reach the Vanier Cup, where they defeated Danny Maciocia’s University of Montreal Carabins, 27-13, in Quebec City.

Not only did he do a lot of winning during his time in Calgary, but he also made a lasting impact on the community. During the summer, he spent time as a coach at junior football camps organized by the university.

Prior to last Thursday’s game against the Stamps, a young fan who was coached by Antwi a few years ago, greeted his old coach with a sweet sign and a smile.

“Spencer was one of the youngest kids to ever come to the camp,” the former Dino said. “I just took a liking to him. He was one of the nicest kids at the camp and he was a very respectful kid. If you know anything about me, you know that my parents raised me on the basis of respect.

“I tried to help him out as much as I could. Obviously, I was young, and he was young, so I never really thought that he’d show up to a game and remember me.”

Returning to Montreal as a pro

Due to the pandemic, his pro career was put on hold. 2020 would’ve been his rookie season, but the CFL didn’t play that year. Instead, he got his first taste of professional football last year.

Antwi had a solid first season. He played in every game and mostly contributed on special teams. There were some good moments and some tougher ones.

In the final game of the regular season, he got an opportunity to be the Als’ feature back in the second half against the Ottawa Redblacks. Unfortunately, he lost two fumbles, including one deep in Ottawa territory when his team had a slim lead. The Redblacks recovered the ball and ended up taking the lead on the ensuing drive. Montreal lost the game, 19-18, in front of their home fans.

In the end, that game didn’t have an impact on the final standings, but it taught Antwi some valuable lessons.

“It taught me to be resilient, it taught me to persevere, it taught me to be tough,” he said. “You can’t get too high, and you can’t get too low. When we played our first game against Ottawa, I had a pretty good game. Just like with this Calgary game too. A lot of family and friends are reaching out and that’s all good…I appreciate it. A lot of the fans there are really happy that I did well, but it’s always about the next game. Whether it’s good or bad, you just take it how it is, and you move forward and you move on to the next one. With the Ottawa game, what I learned was that you have to play a full 60 minutes no matter who is in or no matter when your number gets called. You can’t take plays off and you can’t assume the game is won already. Most importantly, you can’t try to do too much. I think that was the biggest lesson. We were up and all I had to do was get a first down, but I thought I could score. I saw the end zone, which was fine, but you have to put the team’s needs before your individual interests.”

After the loss to Ottawa, Spencer’s parents sent Antwi a note offering their support after the difficult loss.

“They were back in Calgary; they watched the game. It was a tough game, so they sent a nice note with a picture. It was good to receive that support.”

Antwi will now get to show off the lessons he’s learned from past seasons. Whether or not he gets the bulk of the carries during Stanback’s absence remains to be seen, but he has the opportunity to be more of a factor on offence than anyone expected.

“I feel like I’m ready to get the majority of the carries,” said Antwi. “I’ve been in this offensive system for some time now, so I’m sound in protection and sound in offensive philosophies.

“I’m going to keep having a good week of practice. Based on the conversations I’ve had, I’m ready to play the whole game without coming out unless I need to, and I’m ready for that.”