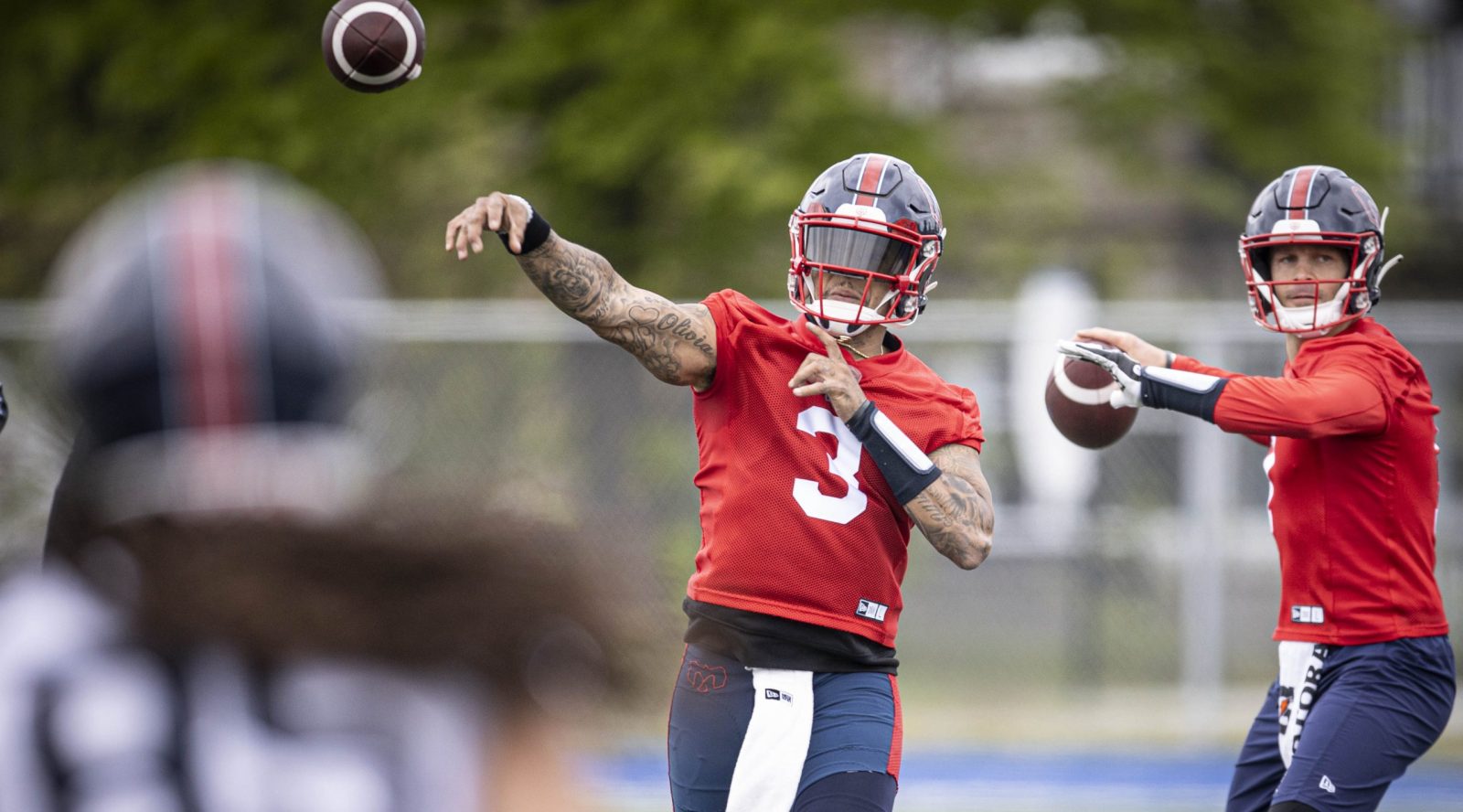 Quarterback Vernon Adams Jr. (#3) will make his return to the Alouettes lineup for the first time since suffering a season-ending shoulder injury against these same Redblacks last October.

The 29-year-old has participated in all but one day of training camp this year, but he was held out of last Saturday’s game against the Hamilton Tiger-Cats. He’ll finally get to test his shoulder in a game situation.

“(I’ll be feeling) excited, anxious, maybe a little nervous just because of the last time I was on the field and how (the injury) happened,” Adams Jr. said after Thursday’s walkthrough in Trois-Rivieres. “More than anything, I’m really excited. I’m ready to get out there with the guys and be back in the nest. It’s just an awesome feeling.”

Even though he’ll be the starting quarterback on Friday night, he isn’t expected to play the entire game. We don’t know how much he’ll play, but last week’s starter, Trevor Harris, suited up for an entire quarter. No matter how many snaps he gets during this game, his goal is simple enough.

“I want to go down and score, move the ball and be efficient,” Adams Jr. added.

2- The first overall pick will make an appearance

Linebacker Tyrell Richards (#42) will make his first career appearance in the CFL. The first overall pick in the 2022 Draft has been in and out of the lineup during training camp and he didn’t play in last Saturday’s game against the Ticats.

Richards is expected to play on special teams and on defence throughout the game. The 23-year-old is listed as the third middle linebacker on the depth chart, so you should see him on defence at some point in the second half.

“He’s going to play a little bit on defence, he’s going to play special teams, of course,” head coach Khari Jones said. “We just want to see him in action. We want to see him go for it. He’s been banged up too a little bit, so he’s been in and out. But I feel like he’s in a good place, so hopefully we get to see what we think of him. It’s still going to be a process even though he was the first pick and there are expectations. We just want to get him out there and get him used to the CFL game.”

Not only did Richards work with the linebackers during training camp, but he also did some positional drills with the defensive line. He’s a freak athlete that could make a major impact during his rookie season.

The Als made a couple of trades leading up to the draft to secure two first-round picks. With one, they took Richards. With the other, they took receiver Tyson Philpot.

Philpot missed a good amount of camp with a hamstring injury he suffered on the first day and he didn’t play in Hamilton, but he made a statement in his return earlier this week.

On Monday, Philpot slid into the starting offence because Hergy Mayala was taking a maintenance day, and the first-year player stood out.

Not only did he impress his teammates, but he also caused a firestorm on social media with one of the catches he made during the one-on-one drills in practice.

The former Calgary Dino is very polished for a rookie receiver. The fact that his father, Cory, played in the CFL certainly helped him in his development.

Philpot’s twin brother, Jalen, was drafted fifth overall by the Calgary Stampeders in 2022.

“It’s important,” Jones said of Richards and Philpot getting a preseason game under their belt before the start of the regular season. “You just have to feel the game and you have to know what’s happening out there. Until you get out there, you don’t know how it is to be tired and to have to keep running and, so, all of those things are important. It’ll be fun to see them in their first game.”

Veteran weakside linebacker Chris Ackie will be held out of this game (more on that later), so second-year player Brian Harelimana will get the start.

Harelimana was a fourth-round pick in the 2020 CFL Draft out of the University of Montreal, where he played for Als GM Danny Maciocia.

“He’s got great instincts, he moves well, and he plays with a lot of confidence,” Jones said of the Canadian linebacker. “He’s a pro as well. It’s fun to see these guys come out this young and feel like they belong in the game.”

The 26-year-old played in eight games last season and was primarily used on special teams.

5 – Some veterans will be rested

Some veterans on offence and defence will get the night off because they’re a little banged up or because of the short week coming up (Montreal will play in Calgary on Thursday night).

Ackie is being rested, and so is veteran defensive tackle Almondo Sewell.

All of these players have a shot at playing the regular season opener against the Stampeders next Thursday night.