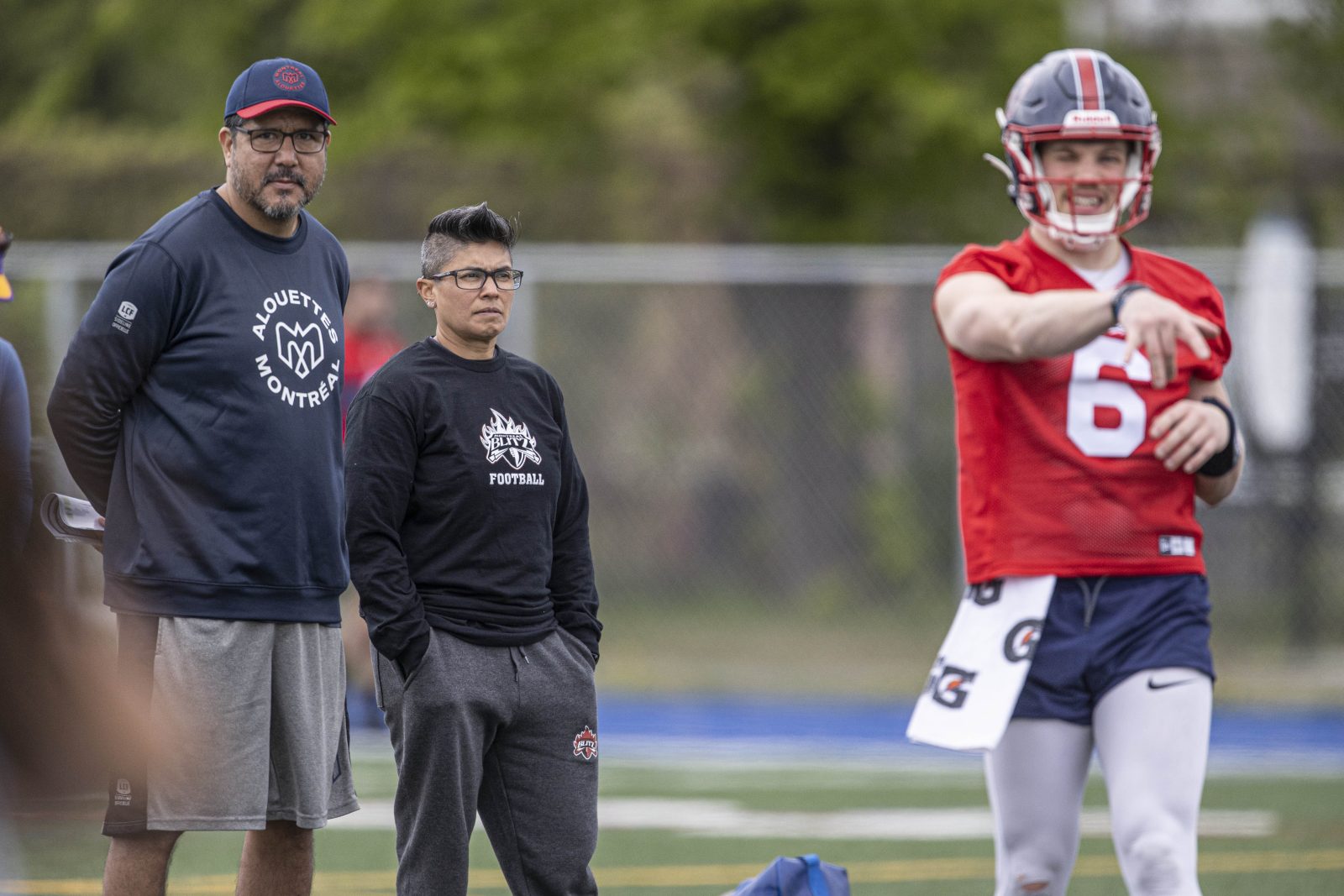 Trois-Rivières, May 25, 2022 – When the Montreal Alouettes announced in April that the team would host two coaches from every university football team in Quebec, as well as from the Montreal Blitz, during its next training camp, Saadia Ashraf had chills.

“Danny Maciocia called me and I was so excited when he asked me to join the team. It is a great initiative by the Alouettes and the CFL,” said Saadia who is accompanied by her General Manager at camp Andréanne Dupont-Parent.

The owner of the Blitz, the only women’s elite contact football team in Montreal, is like a sponge. “It’s honestly great, I attend all the meetings and I can ask questions at any time. I’m going to bring back some great ideas that I will be able to share with my staff,” declared Saadia, cheerful from her experience.

She works on a daily basis with quarterback coach Anthony Calvillo, and does not hesitate to ask him for advice. “Anthony is a great person and very approachable. From the beginning he made me feel comfortable. I can’t ask for more, I am with a CFL legend, it’s an enriching experience, I learn so much. Most guys played football in their youth, but girls with the Blitz didn’t. The basics that we are learning are very important to us. We learned a lot of new exercises in practices and we look forward to showing them to our players,” added the native of Pointe-Claire.

He said it…
“We see that the intensity is going up a notch and the guys are getting ready for our game in Hamilton. There is still some work to be done, but that is part of the process during a camp.”
– Anthony Luke, Defensive Line

Rapid fire..
Receiver Cole Spieker caught more passes again today. He also showed that he was able to run the ball… De’Lance Turner returned a few football during practice and dodged some of his opponents with ease… Quarterback Dominique Davis threw a great pass to Fabian Guerra who is definitely getting into the habit of making amazing catches… Former Université de Montreal Carabin Regis Cibasu is now playing as a receiver. He was a fullback in 2021 and lost 34 pounds since… Adarius Pickett leaves no time for the offence to react. As soon as the ball is thrown, he is glued to the receiver like a leech. He was credited with an interception at mid-practice… Receiver Quan Bray grabbed a Trevor Harris’ pass by jumping and avoiding tackles…