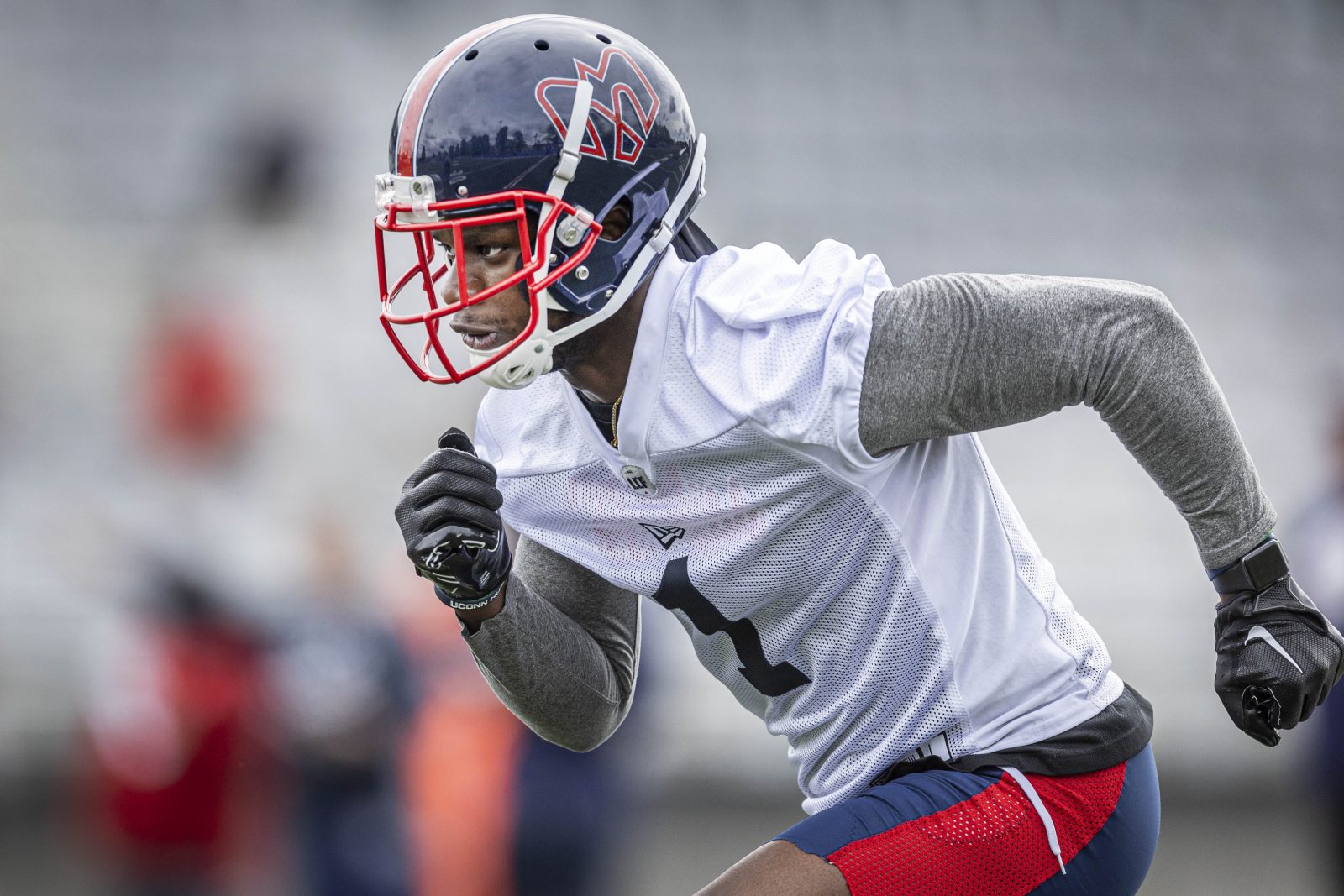 The Alouettes were able to lure Montrealer Hergy Mayala away from the Calgary Stampeders in free agency last winter. It looks like the National receiver will play a bigger role with the Als than he did in Calgary.

That’s not to say that he wasn’t a useful piece with the Stamps, but there’s a good chance that he could become the third or fourth option in the passing game this season.

I was able to talk to the 26-year-old after Tuesday’s practice at Stade Diablos in Trois-Rivieres.

Joey Alfieri: We’re a couple of days in, and I know you’re familiar with the city of Montreal, but what has the adjustment been like for you on a new team?

Hergy Mayala: For me, it’s just a lot of fun. Like you said, I’m coming back home. I felt comfortable, I felt like this is where I want to be, and this is where they want me. It’s not really a big adjustment. I started going over the playbook four months ago. It’s kind of just going out there and executing what I already know and show that I can play the game of football.

JA: It seems like you and Vernon Adams Jr. already have good chemistry on the field. What do you attribute that to?

HM: Vernon is just a leader. The second that I signed here, he was the first person to reach out to me, welcoming me and stuff like that. Two days later, we were in the playbook together. Whenever the quarterbacks need me to be somewhere, I just make sure that I get there the best I can.

JA: How different is the offence from Calgary to Montreal?

HM: I don’t like to compare things, but I feel like me being in Montreal, there’s a lot more chances for me here. It’s a free-flowing offence. We just kind of go out there and show our God-given skills, and that’s something that I love about here. It’s one of the reasons why I decided to come here.

JA: Do you go into the season with specific goals in mind? Are there numbers you’d like to hit?

HM: It’s all about letters for me. That’s wins and losses. That’s the reason why I signed here. Last year, before our playoff game, we watched the playoff game against Hamilton, and I feel like that was a close game. For me, coming back home, if we win a Grey Cup, that’s going to be a perfect season. The numbers are going to take care of themselves. When you win, everybody has fun.

JA: What kind of opportunity to you think you’ll get in this offence this year?

HM: For me, it’s all about being closer to the ball. We all know that the Canadian game is really from the hash to the boundary sideline. Being closer to the quarterback and being more in the reads is something that I’ve been wanting to have since I’ve been in this league, and that’s the opportunity that I get, and I just have to make the most of it.

JA: How does the moving of the hashmarks affect things for you specifically this year?

JA: How do you guard against the dog days of training camp?

HM: It might be a little different for me than it is for everybody else. I’m on a new team now and I’m trying to take as many reps as I can. That keeps me in the flow of things and it kind of gets my body going. A lot of these guys have been in this offence for a while, so I’m trying to catch up and get my reps in. That’s how I go through it. I just want to be on the field as much as I can because once you get on the sideline your body relaxes a little bit and you start thinking about other things.

JA: How would you describe Khari Jones’ style and approach as a head coach?

I have respect for him. The other day I was driving to the scrimmage, and I saw him walking from the dorms (roughly a 20-minute walk). That’s unheard of or unseen before. He just goes out there and gives every one of us a chance. As a coach, you give your players a chance and you make them believe that they can make something happen. I respect him for that.

JA: What are some of the things you’ve picked up from watching Geno Lewis in practice?

JA: Every game is important, but you get your old team, the Calgary Stampeders, in Week 1. Did you circle that game on your calendar?

JA: Is it good to get it out of the way early or would you rather ease into the season before facing your old team?

HM: If it was up to me, I’d probably play them every week. But we get one shot at it, so the earlier the better.