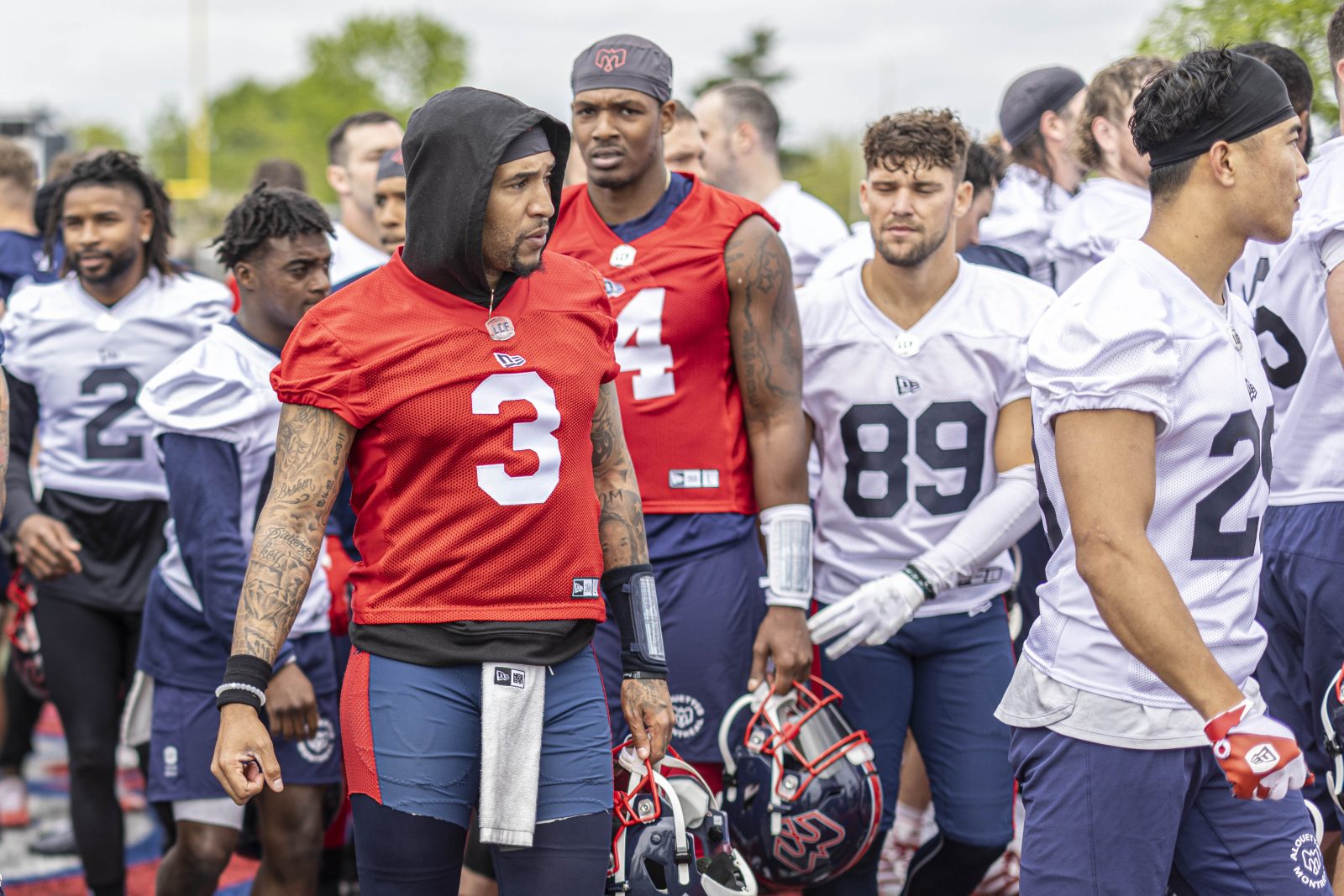 Day 3 of training camp got off to an eventful start. The first on-field session was delayed because of lightning in the area. Practice started before 9:00 am ET but was delayed for a second time after about an hour. Eventually, the clouds cleared and temperatures at field level rose significantly.

The first practice saw players wear pads for the first time this preseason. They came off prior to the start of the second session.

A pair of CFL officials were present at camp today, as Andre Proulx and Kevin Riopel called penalties during drills, and they answered questions from players and coaches throughout the day.

Global receiver Kevin Kaya stood out for all the right reasons today.

He made an incredible over-the-head catch on a pass from Vernon Adams Jr. during one-on-one drills between receivers and defensive backs. The former University of Montreal Carabins product also made an impressive catch over the middle during an offence vs. defence drill.

The 27-year-old, who is born in France, is an intriguing target, as he’s six-foot-three, 195 pounds.

“I worked out with him during the off-season,” Geno Lewis said of Kaya after practice.

American receiver Fabian Guerra also made some plays on the field on Saturday. He came up with several important grabs throughout both practice sessions.

During the receiver vs. defensive back drills, Guerra went up against an opponent in a winner-take-all situation. If the receiver catches the ball, the defensive players would have to do 10 pushups, if the pass is incomplete, the offensive players had to do the pushups. In the end, Guerra came up with the reception on a short out-route.

He had a solid day.

Canadian receiver Mathieu Robitaille made three consecutive receptions from Trevor Harris near the end of practice during the no-huddle portion of offensive drills.

The 25-year-old signed a free-agent contract with the Alouettes back in March. He spent his university days with the Laval Rouge et Or.

Safety Marc-Antoine Dequoy came up with a pair of turnovers on defence this morning.

Dequoy made an interception that would have been returned a long way had it occurred in a real game. He followed that up by recovering a fumble after defensive end Nick Usher stripped the ball-carrier.

“It feels good to be back on the field making plays again. I like the environment we’re in. It’s my second year in this defence with (defensive coordinator) Barron Miles, so I’m already a lot more comfortable. What I like about the defensive players and the defensive backs is that we’re building on what we learned last year.”