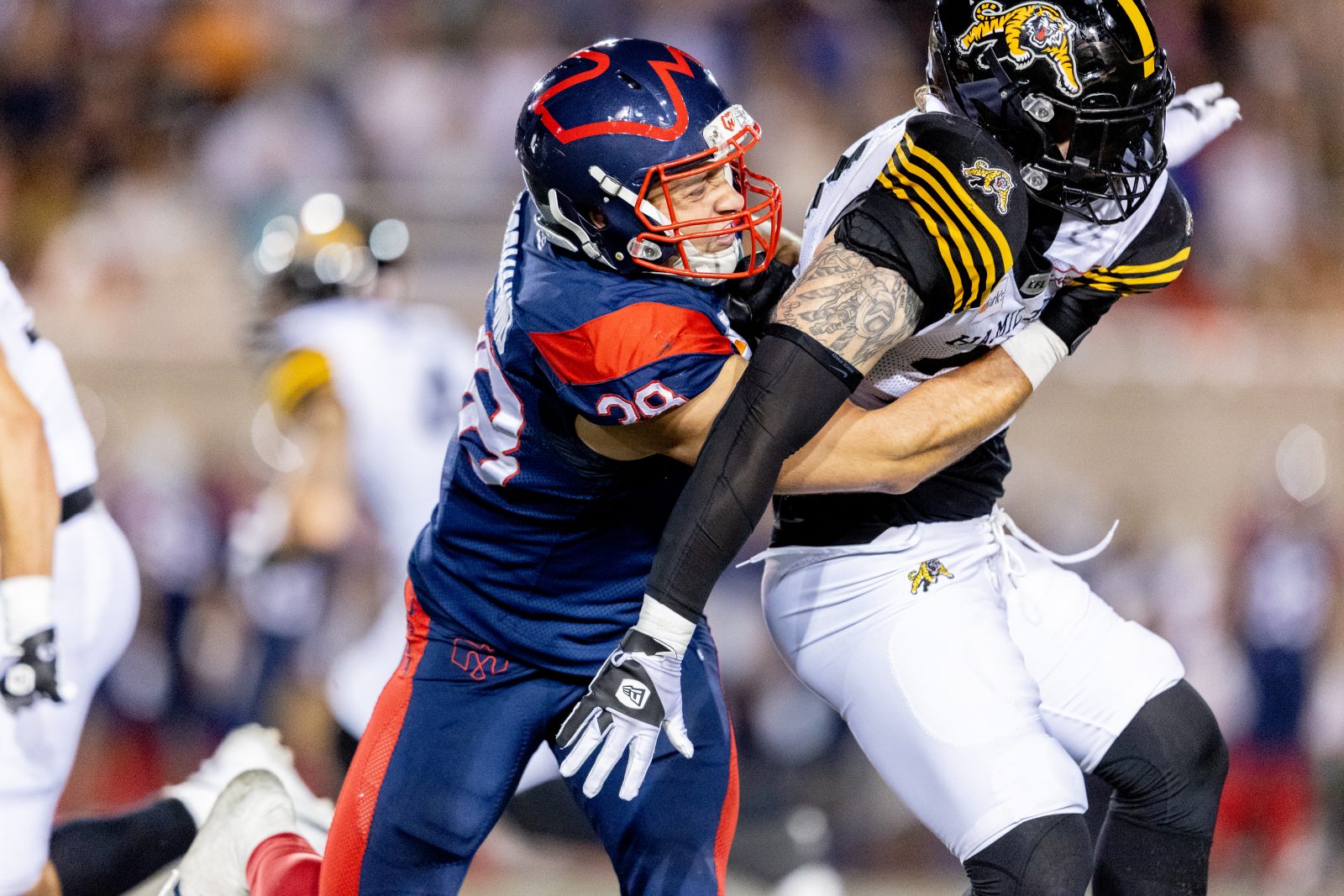 One player from each of the Canadian Football League (CFL)’s nine teams has been nominated for the 2021 Jake Gaudaur Veterans’ Award, which annually recognizes a Canadian CFL player who demonstrates the attributes of Canada’s veterans: strength, perseverance, courage, comradeship and contribution to Canadian communities.

The award has been presented since 2010 and is named in honour of Jake Gaudaur – a distinguished Second World War veteran and the longest-serving Commissioner in CFL history – who embodied these attributes.

The recipient is chosen by a committee made up of Robert Loken and Paul Thomson from Veterans Affairs Canada, CFL ON TSN analyst and former Honorary Colonel of 417 Combat Support Squadron, Glen Suitor, and CFL Commissioner Randy Ambrosie.The award will be presented at the CFL Awards at the Hamilton Convention Centre on Friday, December 10 at 6 p.m. ET.

The 2021 edition of Grey Cup Week will feature a number of free fan events, including the CFL Awards, the Grey Cup Arrival delivered by Canada Drives and the Commissioner’s Fan State of the League address, as well as fan favourite celebrations, such as the Spirit of Edmonton events, the CFL Alumni Association Legends Luncheon, and much more. Additional details and registration information can be found at greycupfestival.ca.

The 108th Grey Cup from Tim Hortons Field, featuring Arkells in the Twisted Tea Grey Cup Halftime Show, will air live on Sunday, December 12 at 6 p.m. ET on TSN and RDS – Canada’s home of the CFL. A limited number of tickets are available at ticketmaster.ca/GreyCup.

BC Lions – David Mackie
David Mackie has battled through major injuries over the past few seasons. His determination and perseverance have earned him the respect of his peers, and he has been voted team captain for the past two seasons. He is not only a consummate professional, but also a thoughtful leader. He generously opens his home to his teammates to build and strengthen their bonds, including during the holiday season when some are unable to make the trip home. Mackie serves as a staunch advocate for the Indigenous community, creating a bridge between them and the team to foster understanding and allyship.

Edmonton Elks – Matt O’Donnell
Matt O’Donnell leads by example both on and off the field. He was the only Elks offensive lineman to start in every game this season. He takes the responsibility of being a role model seriously, and carves time out of his schedule to help mentor his younger teammates. Recognizing the importance of bridging the past with the present, O’Donnell acts as a connection between alumni and the current team to ensure the hard-fought lessons of the past are not forgotten. He is a committed member of the community, helping to promote leadership in northern Alberta schools, while aiding in the fight against bullying with young people.

Calgary Stampeders – Rene Paredes
Despite battling through various injuries, Rene Paredes has not missed a game over the course of his 10-year career. Now in his seventh season as team captain, he continues to provide a calming and steadying presence in the locker room. In particular, this season, he has served as a strong mentor to a new holding and kicking cohort. Paredes faced a different challenge this year with the death of his friend and mentor, Dr. Frank Lodato. Just days after his passing, Paredes delivered the game-winning kick in a game he dedicated to Dr. Lodato. Despite the pandemic, Paredes continued his active role in the community by filming PSAs and taking his bi-weekly visits to the Alberta Children’s hospital online.

Saskatchewan Roughriders – Brett Lauther
Despite a lack of opportunity early in his career, Brett Lauther persevered and continued to hone his craft, before signing with Saskatchewan in 2018 – four seasons after initially cracking a CFL roster in 2013. He has worked through multiple injuries in the past few years, including hip and groin ailments, as well as, a serious eye issue, to become a trusted and dependable part of the team. Lauther serves as the Saskatchewan Roughrider Foundation KidSport Ambassador. He helped promote a 2021 campaign with the Regina Food Bank, and he is a steadfast champion of youth in sports, actively fundraising in support of renovating an athletic facility in his hometown of Truro, N.S.

Winnipeg Blue Bombers – Jake Thomas
After being selected in the fourth round, Jake Thomas made the team as a rookie in 2012 through hard work and determination. He has steadily grown to become a reliable and trusted starter. He has played through various injuries and changes in the team’s leadership to carve out a successful career, while earning the respect of his teammates. He is a staunch believer in creating a strong team environment and culture. In Winnipeg, he supports multiple school and fan initiatives, but it is in his home community of Fredericton where he has concentrated his efforts to support others. Through the annual Jake Thomas Celebrity Curling Classic, he has raised over $50,000 for minor football and youth curling.

Hamilton Tiger-Cats – Chris Van Zeyl
Despite the difficulties of the cancelled season, Chris Van Zeyl returned for his 14th year in the CFL as one of the league’s oldest players at 38. He overcame multiple training camp and early-season injuries to return to his status as an all-star calibre offensive tackle. At all times on and off the field, he serves as a mentor and leader to his peers – whether they are making the jump from playing collegiate football or becoming familiar with the Canadian game. As part of United Way’s Sleepless in our City initiative, Van Zeyl slept in his car on a cold winter night to raise money and awareness for homelessness in Halton and Hamilton. He also serves as an ambassador for the Tiger-Cats’ two current largest community outreach programs – TELUS #EndBullying All-Stars and Interval House’s Be More Than a Bystander. He also lends his support to several other local community organizations like Hamilton Health Sciences, the Children’s Aid Society, the Catholic Children’s Aid Society, and his alma mater, McMaster University.

Toronto Argonauts – Jamal Campbell
Jamal Campbell remains a strong, active and vocal member of the team despite enduring a season-ending injury. While persevering through a trying recovery, he continues to support the development of his younger teammates. Campbell serves as a mentor and leader to an inexperienced offensive line, imparting some of the knowledge and insights he has garnered over the course of his five years in the CFL. Campbell organized a campaign last winter to support Toronto’s homeless population. He raised $2,500 to fund meal and survival kits, before coordinating a group of friends and teammates to distribute the much-needed meals and supplies throughout the downtown core.

Ottawa REDBLACKS – Nigel Romick
Nigel Romick has served as a consummate professional since the inception of the REDBLACKS. He has earned the respect of his teammates through his dedication to special teams. Outside of his performance on the field, Romick is a committed husband and father. He and his family play an active role in welcoming the families of new teammates and in fostering a positive and supportive environment. Romick is active in a one-on-one individual mentoring program, which pairs athletes with a high school counterpart to learn what it takes to find success through sports.

Montreal Alouettes – Christophe Normand
Christophe Normand has demonstrated determination and perseverance throughout his career, working his way up to being the starting fullback with his hometown team. When the season was in question, he enrolled in the Canadian Armed Forces as an infantry solider, as he was looking for a career where he could keep working a physical job in a team-oriented environment. During the pandemic, he also served as a teacher for autistic children near his hometown of Marieville, Que. The 30-year-old serves as a steady voice and as a strong leader in the locker room. He fosters a fun and friendly atmosphere with his peers to create a comfortable and welcoming team environment. The Université Laval graduate is consistently among the first to volunteer for community initiatives, and serves as a youth football coach.