Sports and puberty: The price of performance

Sports and puberty: The price of performance

All professionals agree that sports are excellent for a child’s health and development. It’s true that young people spend a lot of time in front of screens not just at home, but also in the classroom, where computers and tablets are starting to replace traditional notebooks. Therefore, it’s not always easy for them to get their recommended 60 to 90 minutes of exercise per week. Getting teenagers to run or walk every day often proves impossible.

To force them to be active, many parents enroll their children in clubs where some of them turn out to be excellent athletes and desire to go further in order to develop their talents. This is when health problems can start, according to a report published in December 20181 by the National Academy of Medicine in France. Certain disciplines are particularly targeted, among which are the so-called “sports of appearance”: gymnastics, dance, figure skating, etc. Tennis and long-distance running are also believed to have harmful effects on the joints if practised more than 15 hours per week. Contact sports such as boxing, hockey and football, and motorsports such as go-karting and motocross, are also not recommended before a child stops growing because of the obvious risks of concussions and various fractures.

Read more: What is a concussion? 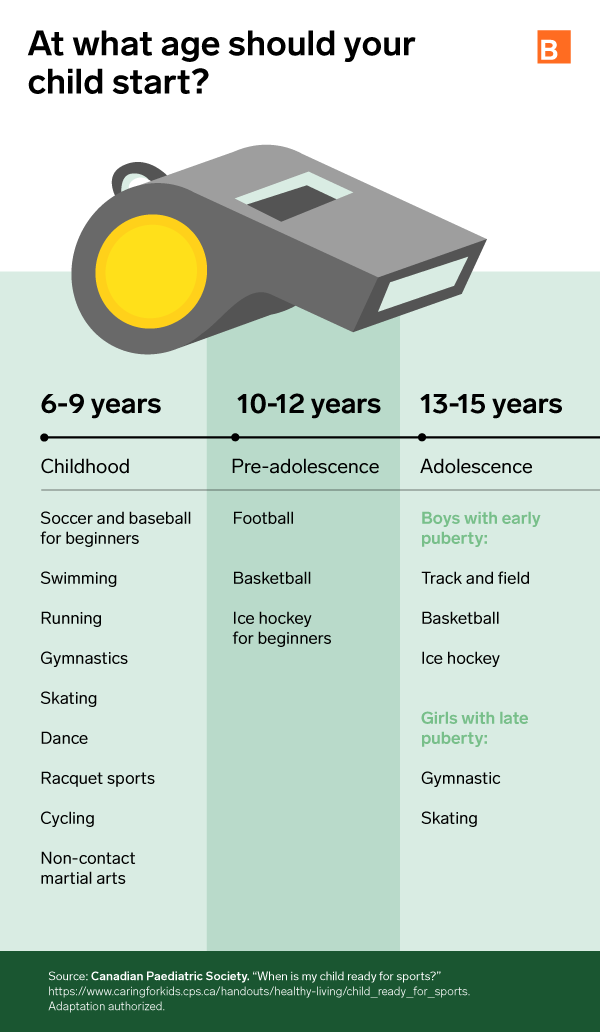 The latest research suggests that even rigorous training is actually beneficial for the development of a child’s body.

Weight-bearing locomotion activities, jumping or high-impact sports, and muscle-strengthening exercises increase bone mineral density and strength. This strengthening at a young age will be beneficial throughout life thanks to a better bodily constitution. This means that activities such as weight training could be practised by children without potential damage to the body.

However, overtraining can have the opposite effect. Dr. Jérôme Ouellet, a pediatric sports medicine doctor, often sees young patients with growth plate injuries. “They’re mostly caused by biomechanical deficits, meaning that the organization of the child’s movements is usually not very good. It could be a lack of flexibility or problems with coordination, activation, control, muscle balance, and so on. It could also be growth-related,” he says.2

Therefore, it’s important to be aware of the sometimes subtle signs that children are sending to make sure they’re not wearing themselves out. Lack of motivation, fatigue, difficulty sleeping or deteriorating performance is all good indicators that it may be time to take a break.

The effects of “sports of appearance” on puberty and the health of young girls have been monitored and documented for many years. The discipline of gymnastics is particularly scrutinized by specialists and multiple studies tend to demonstrate causal links between amenorrhea (absence of menstruation) and high-level engagement in these sports.

According to a study3 by Dr. Panagiota Klentrou, there is a correlation between practising these sports for more than 15 hours a week and the delayed onset of menstruation. The intensity of the activity combined with an unbalanced diet could also have an impact on growth and fertility in the long term. The study suggests that the low body fat content of gymnasts could be the cause of several deficiencies. It’s true that weight gain can significantly red

uce the performance of these young athletes and affect the aesthetic criteria associated with these sports. Therefore, weight control is an integral part of the performance strategy.

Dr. Klentrou reports that observations among Croatian female athletes indicate that their first menstrual period began at an average of 13.8 years of age instead of 12.6 years in the rest of the adolescent population. Delayed growth was also observed in athletes who trained 35 hours a week before puberty.

The author of this study concludes that although it’s difficult to clearly establish a causal link between intensive sport and the delay of the first menstrual period, the abundance of data collected suggests that such high-level physical activity plays a dominant role. The extreme pressure on prepubescent bodies and the eating disorders inherent in these sports cause growth problems and delayed puberty, the long-term consequences of which still need to be examined.

Sporting careers are relatively short, while the financial benefits generated by major events are immense. For these reasons, coaches, sponsors, athletes and sometimes even parents try to maximize performance as early as childhood. As a result, some young athletes start training and eating like the world’s elite at a very young age. There are also cases in which children, particularly girls, follow diets that are considered extreme.

Nowadays, regardless of the sport, young prodigies are everywhere and regularly dominate their elders thanks to preparation that has been fine-tuned since childhood. While the accumulated accolades would appear to justify this approach to athleticism, the consequences for long-term health, although still partially defined, seem to be worthy of consideration to improve the calibration of training regimens for young people.

It should be remembered that training in excess of 15 hours per week is considered intensive prior to puberty. Some sports are also more harmful than others for children. Nevertheless, physical activity remains the best way to avoid obesity and promotes physical, psychological and social development. Therefore, it’s important to encourage children to be active while making sure that the level of activity is suited to their age and condition.

This article was written in collaboration with the scientific team of Biron Health Group.