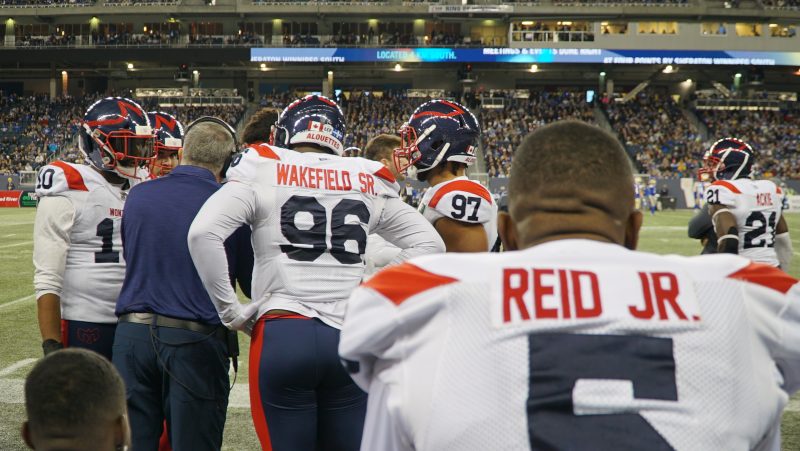 Sure, it’s easy to see the negatives after Saturday night’s loss in Winnipeg: A second straight defeat that leaves us a little further removed from top spot in the East Division. But there are many reasons to focus on the positives, too. And, no, we’re not assuming the role of ostriches and putting our heads in the sand! There was the bad, and, the good.

First off, our Alouettes were facing the defending Grey Cup champion Winnipeg Blue Bombers, undefeated in eight straight games, and who have a tendency to not only defeat their opponents, but annihilate them. Add into the mix home field advantage, year-over-year consistency and it’s a potential recipe for disaster for any visiting team. We were still having to deal with injuries to the offensive line with both Sean Jamieson and Phil Gagnon being ruled out. Our newly-signed veteran quarterback Trevor Harris was making his first start with the team after only two weeks of practice and limited knowledge of the playbook. Throw into the mix Martese Jackson’s absence (who was intended to replace returner Mario Alford who himself has been out of action for several weeks) along with other players nursing an assortment of injuries and it hinders us from having significant stability.

On paper, pundits were predicting a very tough task for our Alouettes. But the guys rose to the challenge: The Bombers had never surrendered more than one touchdown per game at home, yet our Alouettes registered three! At the end of the 3rd quarter, the game was tied 21-21. For the first time this season, the Bombers were sweating.

The start of the game was auspicious, however, with a special teams blunder leading to Winnipeg’s first touchdown of the night. However, it didn’t take long for the Als’ defense to get the team back in the game: Greg Reid caused a fumble that was recovered by Jamal Davis II for a 19-yard touchdown. Although the Bombers’ offense scored a second touchdown, contributions from William Stanback (who surpassed the 1,000-yard rushing mark for the season) and Trevor Harris led to a Reggie White Jr. 6-yard touchdown reception and the score was 14-14 at halftime.

And how about the start of the 3rd quarter! Impeccable defense and another successful offensive drive during which Harris found Quan Bray for a 39-yard completion and then Jake Wieneke in the end zone for a 7-yard TD catch. It was now 21-14 Montreal… safe to say the guys were doing a lot more than simply lying down and playing dead!

It’s not for nothing that Winnipeg is the best team in the league right now. They equalized at the end of the 3rd quarter and then took a 7-point lead mere seconds into the 4th quarter. Montreal’s offensive line, very good once again despite the circumstances, was starting to tire and Trevor Harris did not have as much time in the pocket (and it didn’t help matters that the referees seemingly failed to see some offside infractions). The Als’ once-efficient ground game also seemed to be running on fumes.

A Trevor Harris interception late in the game removed any comeback hopes and sealed the victory for the Bombers, but yet again the guys stayed in the game until the final whistle.

So, yes, it’s a loss. But above all else it sends a message to the league that we can compete with anyone, even the best team in the standings. The Bombers had a very difficult time defeating their opposition – and it’s been a long time since someone has been able to say that.

This game will be used to help prepare for the playoffs, and correct whatever needs to be corrected. Trevor Harris has two games left to familiarize himself with the playbook, as well as to build on the chemistry he has with his receivers. The team will hope to have as many players as possible return from the injury list (we have not been unscathed on this count), and whoever our opponents may be, we will be sure to be competitive for the rest of the season… the final weeks of a season that promise to be very exciting!

Two regular season games remain, both at home. We’re looking forward to seeing you there – our guys deserve your support and they cherish it. See you next Saturday, November 13 at 1:00 p.m. at Percival-Molson for the rematch against Winnipeg.