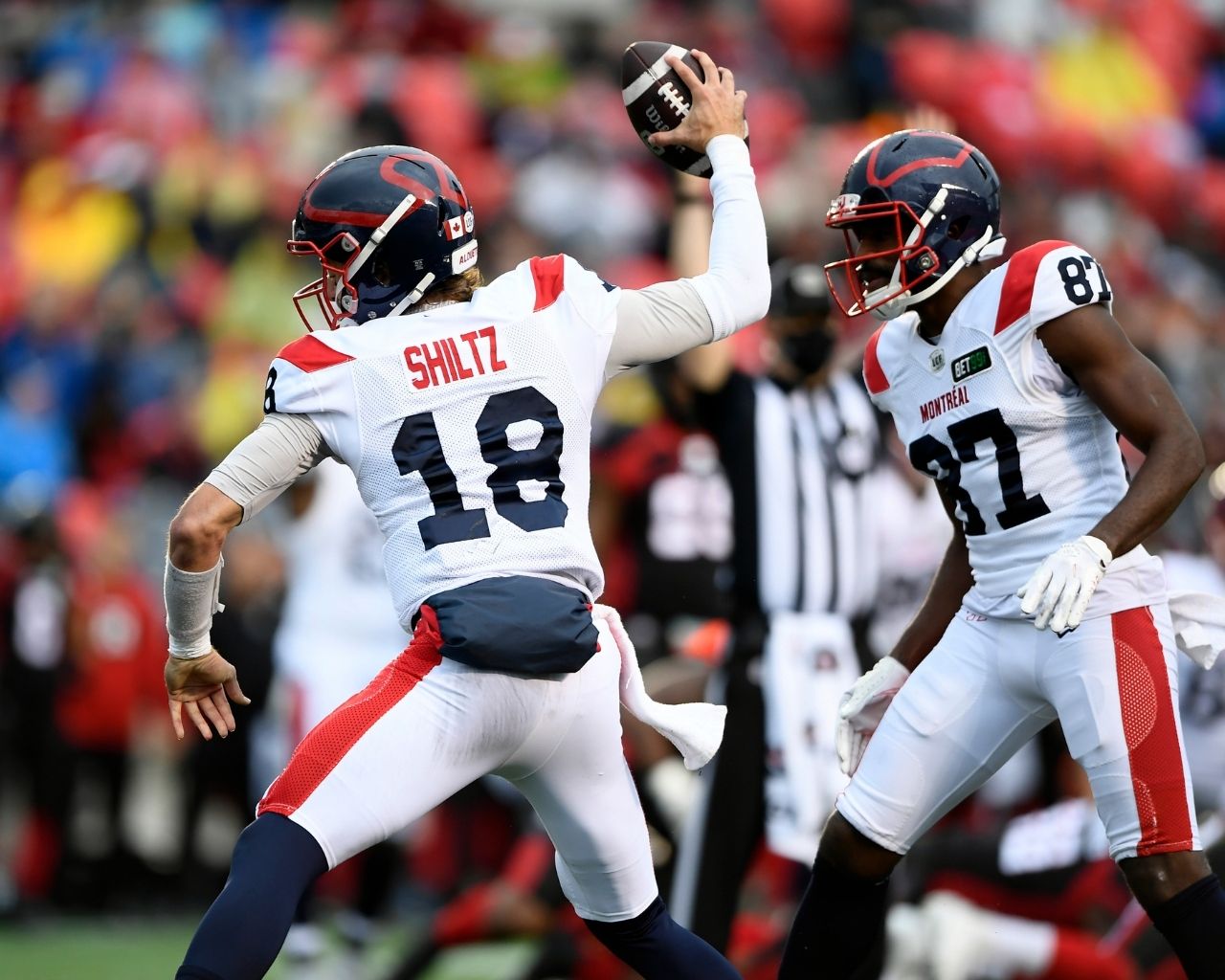 All the experts say the same thing: It is very difficult to string together two consecutive victories against the same team in the same week. But… our Alouettes were able to do exactly that Saturday afternoon in the nation’s capital! The win against the REDBLACKS was the team’s third victory in a row and the fifth so far in the 2021 season.

Before the game against the REDBLACKS, our two most recent wins really had a “2019” feel to them with edge-of-your seat suspense and victory snatched from the jaws of defeat in the final seconds. This time around we changed the formula just a little bit, with the foundation for triumph laid in the 1st half.

The Alouettes were once again without the services of running back William Stanbeck, who fell victim to food poisoning on gameday. As well, quarterback Vernon Adams Jr. began his stint on the six-game injured list having fractured a bone in his non-throwing left shoulder last week. Vernon’s replacement, Matt Shiltz, was making his first start of the season and he performed well… actually, very well, in fact (21 / 34, 281 yards, 1 touchdown, 1 interception and 1 rushing touchdown).

Just like the Thanksgiving Day home game, the Als started strong. The first offensive series culminated with a David Côté field goal (he finished the game a perfect three-for-three) while the second offensive sequence ended with a Matt Shiltz rushing touchdown. On both of these series our newly-installed starting quarterback looked right at home, highlighted by a 55-yard completion to Kaion Julien-Grant. And let’s not forget the 50-yard touchdown bomb to Jake Wieneke near the end of the 1st half: Shiltz escaped the pocket and connected with Wieneke who was tightly covered by not one but two REDBLACK defenders.

Add to that the stellar job by our defense, which for the third straight game effectively shut down the opposition’s offense. Ottawa quarterback Caleb Evans was under pressure all game long: Randy Randle Jr. had two interceptions, both in the 1st half. And the defensive line was on fire with multiple quarterback sacks. The only times the REDBLACKS were able to penetrate the Montreal side of the field were courtesy of the kickoff and punt returns by the always dangerous Devonte Dedmon. The half-time score was Montreal 25, Ottawa 13.

The weather conditions did not get any better in the 2nd half, making it extremely difficult for both offenses to create highlight-reel plays. The position game – along with the defenses – became the focus, and the Alouettes excelled here as well. Punter Joseph Zema and the special teams units ensured that the REDBLACKS’s starting field position was consistently deep within their own territory. And we can’t emphasize this enough: our defense had 10 quarterback sacks, two forced fumbles (recovering one), three interceptions… it was quite the performance! Aside from a 1st quarter touchdown, Ottawa had to content themselves with three field goals for the rest of the game. The Alouettes, therefore, had matters well in hand…

We often talk about the importance of offense, defense and special teams all needing to contribute in order to succeed. And that was definitely the case on Saturday afternoon. The offense was especially effective in the 1st half and provided enough of a cushion for special teams and the defense to stymie Ottawa for the remainder of the game.

Mission accomplished. Big time. Next up: we’re back home to tangle with the Toronto Argonauts on Friday, October 22. In front of our fantastic fans. At stake? First place in the East Division!

Still don’t have your ticket for Friday night’s game? You’ll want to be at the stadium with first place in the East on the line with the Argos in town!