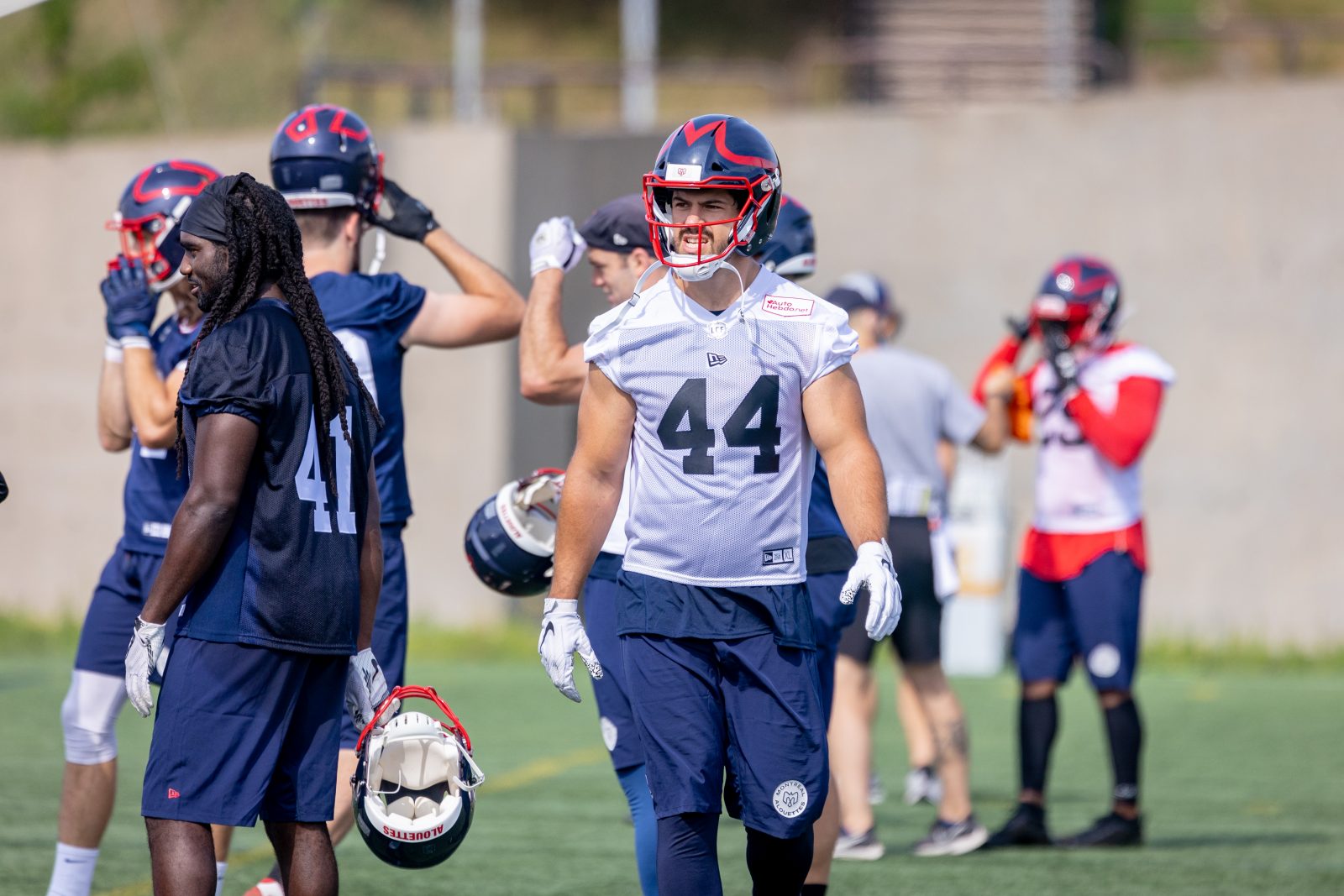 Montreal, July 16, 2021 – The new acquisition of the Alouettes can’t wait any longer. Alexandre Dupuis is looking forward to the Tokyo Olympic Games (July 23 to August 8) to cheer on his girlfriend, three-time medalist in diving Meaghan Benfeito, who will be appearing in her fourth Olympic Games.

Even if there is a 13-hour time difference with Tokyo, count on Dupuis to watch all of his girlfriend’s competitions live.

“I’ve seen her for the last few years, she works so hard. I want to be with her, even if I can’t physically be there”, says the Alouettes fullback.

The women’s diving competitions will take place from Sunday July 25 to Thursday August 5. Meaghan will make her debuts in the 3 meters synchro at 3 p.m. (Tokyo time), so 4 a.m. in Montreal, on July 25.

“I’m really looking forward for her to start, I even have butterflies, I’ll be glued to my screen like many people in Quebec,” says the 31-year-old.

Curiously, the two athletes met on social media two years ago. They were exchanging on mental preparation and both greatly appreciated their discussions.

“We worked a lot on our mental side together, shared our experiences and it helped us a lot in our sport.”

Alexandre Dupuis remembers January 28 as if it was yesterday. He was on a film set of the series Republic of Sarah when his girlfriend called him because their condo in Mirabel was on fire. When he arrived there, he noticed the huge flame following a propane tank that had exploded on a balcony not far from his home.

The condominium was a total loss. His girlfriend and him lost everything. But the two athletes are strong, and they quickly recovered from this tragedy, thanks to their friends, family, GoFundMe, the help of Canadian Tire, Sports Experts and several other companies.

“We just lost equipment and our loved ones were with us very quickly showing support,” says Dupuis who will be playing a sixth season in the CFL. “This kind of event teaches you to become stronger and Meaghan, and I come out stronger in life.”

Soon after, thanks to the help of their friends, Alexandre was able to return to his football training and Meaghan returned to her diving activities. Alexandre also works as a film technician and worked on the next Home Alone which will be released soon.

Rapid fire
Since the beginning of training camp, BJ Cunningham has demonstrated that his 2019 season-ending injury is way behind him. Friday, he made one of the most spectacular catches of camp by leaping up high, before doing a summer-sault once he landed on the ground, without ever losing control of the ball… Defensive lineman Michael Onuoha put in some great pressure and made his way to the quarterback in quick fashion… Quarterback Darius James Peterson displayed his mobility, catching a flat-footed defence on a few occasions… Vernon Adams Jr. continued to prove that he is still difficult for defensive players to get a hold of him, as he was able to elude them a few times… Fullback Christophe Normand caught a pass in the middle of the field at the start of the scrimmaging period, which gave the unit some confidence… The competition at the kicker position is raging, and the guys are constantly pushing each other with long field goals and strong punts.

“I don’t think we have an advantage being local guys. We are here because we have talent and Danny and his team want the Alouettes to be competitive. If you work hard, you will get good results, this has nothing to do about where you are from.”
– Alexandre Dupuis