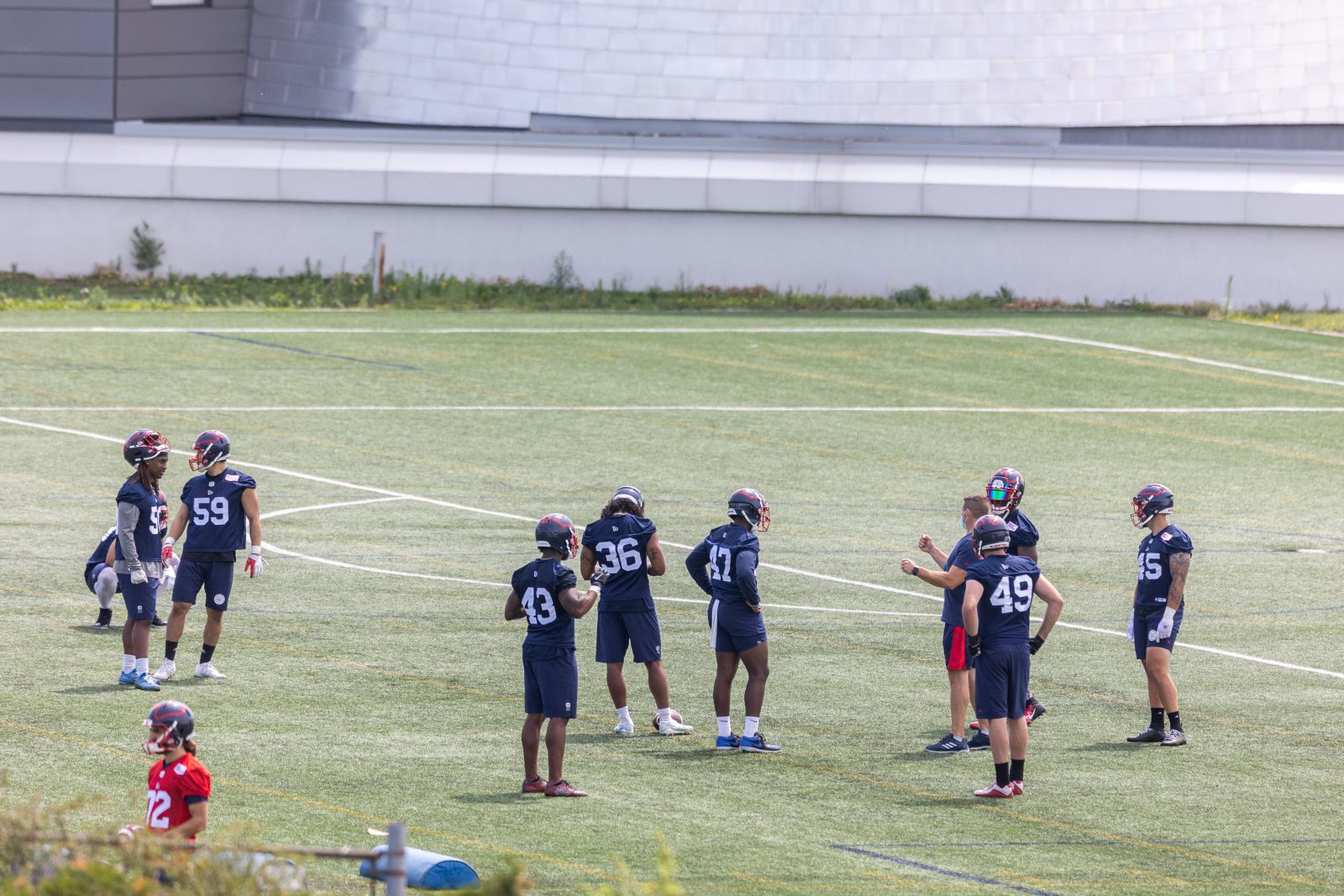 Montreal, July 14, 2021 – Players and coaches had to deal with a few rain showers on the fourth day of camp. But a few droplets weren’t going to stop the Montreal Alouettes to put in a hard day’s work.

Players saw their valiant efforts rewarded, as the second practice of the day was cancelled, which made many of them happy.

“I like our intensity. We work hard, and I like our attitude. Take care of your body, enjoy this little rest,” said Head Coach Khari Jones to the players after the practice.

During the simulated games, the offensive line got down to business. Kristian Matte, Landon Rice and Philippe Gagnon made some good blocks neutralizing the opposing defence.

Todd Howard, the Defensive Line coach and Run Game Coordinator was able to confirm the good work of the offensive line.

“Our defensive line is very competitive. If the offense gives them a hard time, it will come back stronger the next play. Our guys played well, and I must also admit the good work the offensive line did. Often the corridor for my players to stand out did not exist.”

Rapid fire
The day after dropping a few passes, receiver Eugene Lewis was all business on Wednesday and proved right off the bat that it was simply a case of a bad day at the office, as he caught Vernon Adams Jr. passes early in the scrimmage… Linebacker Brian Harelimana was the second former Université de Montréal Carabin in as many days to pilfer a Matt Shiltz pass… Receiver Namaan Roosevelt gave a taste of what he is capable of when he beat his defender and was practically waiting alone for a long Vernon Adams Jr. pass for a touchdown… Defensive back Greg Reid continues his hard work and is always right in the face of the quarterbacks’ intended targets… Receiver B.J. Cunningham made two nice catches in a row, a sign that the long inactivity in his case did not change anything… The catch of the day belongs to Kaion Julien-Grant who caught the “lazer” of Vernon Adams jr for nearly 35 yards… Matt Shiltz took a few runs with the ball, it was well done…

“It is pretty special to play for my childhood team. I really want to take this opportunity. It would be special to make this team. There is a healthy competition between the guys and we have a good chemistry. In reality we are competing with ourselves. That’s why we have to give everything at this camp.”
– Félix Ménard-Brière