Former quarterback Warren Moon is a member of a very select club to own a Jacket from Halls of Fame on each side of the border. There is no doubt in his mind that Marv Levy also deserves a spot in this select club.

“Marv took care of his players, he made sure they were rested. He really was a player’s coach, and that is why the guys respected him so much. There are a lot of reasons why Marv was a great coach and why he should be inducted into both the Pro Football Hall of Fame and the Canadian Football Hall of Fame,” said Moon, who played for Edmonton in the CFL, before landing in Houston in the NFL.

Moon and Levy both had tremendous success in the CFL and NFL, but they never crossed paths north of the 45th. Levy left Canada following his win in the infamous Ice Bowl in 1977 against Edmonton at Olympic Stadium, while Moon started his sojourn in Alberta in 1978.

But still, Moon was aware of Levy’s heritage in Canada. “Marv’s shadow was cast very wide, even though he was gone. Because of the controversy that everybody talked about from the year before in the Grey Cup where they (the Alouettes) were accused of putting staples on their shoes and they had all this traction while the Eskimos were slipping and sliding all around on the snow,” recounted Moon from his home in Texas.

“There was a lot of hostility still on the football team when I got to training camp. Our motivation and rally cry that whole season was to get back to the Grey Cup and avenge that loss they had the year before. That was a big motivator,” Moon added.

For those wondering, Edmonton did in fact avenge its loss from the previous year in 1978, but that is beside the intent of speaking of how Coach Levy belongs to the CFHOF.

Moon, who is a member of the Board of trustees of the Pro Football Hall of Fame in Canton, OH, firmly believes that the former Alouettes bench boss should be inducted into both Halls. Moon spent six seasons in our country, while Levy’s stay up North lasted five years.

“I think it’s fully deserved in Marv’s case, even though he was only there for five years. The success that he had while he was there; he goes to three Grey Cups, wins two of them, and one of them for which he was a General Manager and a Head Coach. That’s something that is kind of unparalleled,” explained Moon. 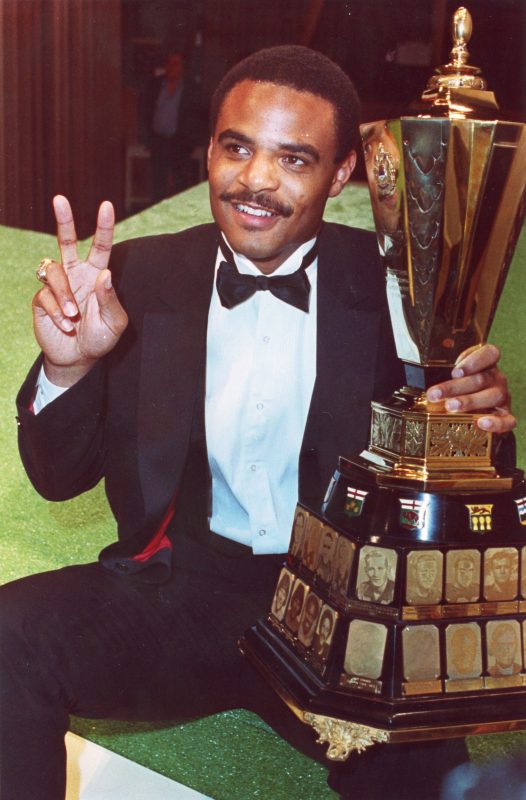 Levy and Moon are linked for many things, notably their successes on both sides of the border. However, the main reason for which they will forever be associated to one another is the historic Buffalo Bills comeback against he Houston Oilers, which was rightfully named The Comeback.

Moon was under centre for the Oilers and gave them a 32-point lead in a playoff game between both teams on January 3, 1993, in Orchard Park, NY. However it was Levy’s Bills that had the last word, winning the game 41-38 following what is still to this day the largest comeback in NFL history.

“I think part of the reason for their comeback in that game was Marv Levy. His demeanour. He was a guy that didn’t panic in that game. I talked to a lot of his players after the fact; Andre Reed, Bruce Smith, all of those guys. There was no panic on his side, he always instilled confidence that they could come back and win that game,” explained Moon.

If Levy hadn’t coached in Montreal in the CFL, where no lead is safe, who knows if he would have transpired the same confidence?

“That is what I loved about the Canadian game. You had to play until that final gun goes off because you never knew what was going to happen. I think that experience definitely helped Marv in a game like that. He had probably been in a lot of games like that in Canada, and he knew that they still had a chance to come back if they did what they needed to do,” figured Moon.

On top of receiving a jacket for each of his inductions, two bronze busts were made of Moon. Jokingly questioned about which one looked better, Moon didn’t hesitate.

“Definitely the one in Canton because I had a little more say so in that one, than the one in Canada. But I am proud of both of those busts,” he replied.