Shaquille Murray-Lawrence, football in the summer and bobsleigh in the winter

Shaquille Murray-Lawrence, football in the summer and bobsleigh in the winter

« These two sports represent my passion. »

In 2017, footballer Shaquille Murray-Lawrence caught the attention of Canada’s National Bobsleigh Team. He was an explosive guy, had the physique for the job, and eyes were on him during the CFL Combine. His 40-yard dash results were impressive. During his time with the British Columbia Lions, he was forced to put his bobsleigh and football dreams on hold because of a bad car accident that happened while he was on his way to a team meeting. “The driver never stopped, it was a hit-and-run, and I suffered from a severe concussion.”

The running back was on the injured list for the entire 2018 season. It wasn’t until the following year that the Scarborough, Ontario native returned to the football field. Despite signing with the Saskatchewan Roughriders in 2018, he never had the chance to wear their jersey. He signed with the Alouettes towards the end of the 2019 season and played two games with his new teammates. He took full advantage of his time on the field to show what he was capable of, recording 190 yards of gains in seven kickoffs.

“I’m happy I came to Montreal. When I started talking with Khari Jones and André Bolduc last year, I wanted to play here. It felt like they wanted me, and it was a great feeling.”

Since September 2020, the 27-year-old has been training with Canada’s National Bobsleigh Team in Calgary along with 32 other teammates. In January, he will fly to Europe to participate in the world championships. Murray-Lawrence practices his new sport alongside two other CFL players, Jay Dearborn from the Saskatchewan Roughriders and Kayden Johnson from the B.C. Lions. 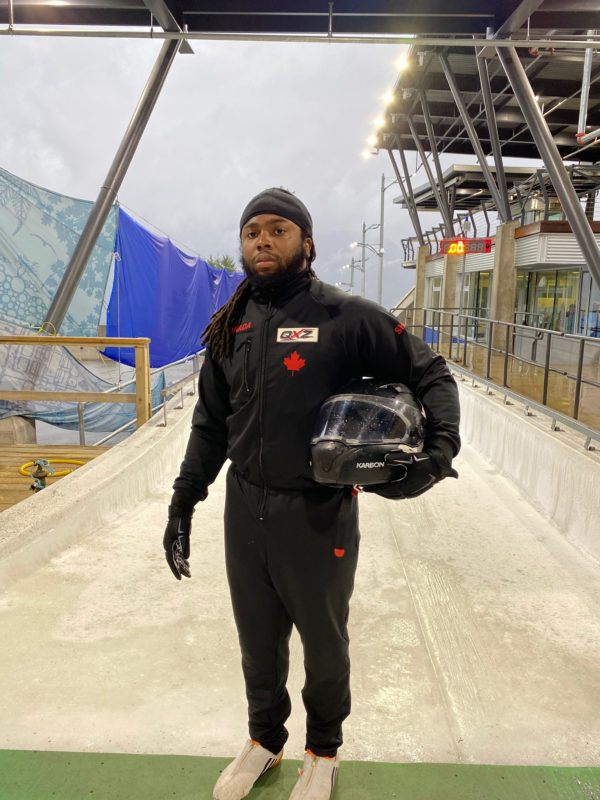 “I have so much fun doing this sport; I feel the adrenaline running through my veins. Bobsleigh requires a lot of power and explosiveness, like in football, so it is perfect for me. Also, I’m glad that there are other CFL guys by my side.”

For now, Murray-Lawrence has two goals: winning the Grey Cup with the Alouettes and competing in the next Beijing Olympics with Canada in 2022. “I want to continue practicing both sports because they represent my passion. I’ll keep training for football in Calgary to be ready for the 2021 season and keep developing skills in my new sport!