The healthcare professionals have been a central topic of discussion over the past few weeks and we will never be grateful enough for everything they’ve done and keep doing for the population. On our end, we wanted to highlight one of our own in the medical field, one that we know very well… the head physician for the Alouettes, Dr. Vincent Lacroix.  For 24 seasons, Dr. Lacroix has been in charge of the team, making sure that our players are healthy and in top physical condition to be the best versions of themselves on the field.

Dr. Lacroix practices sports medicine as well as emergency medicine at the Montreal General Hospital and worked for the Montreal Canadiens hockey club for 14 years. His clinical and research interests are in the area of lower abdominal wall injuries, exercise-induced asthma, pre-participation physical examinations and the ethical challenges of returning injured athletes to competition. Our head physician was also assistant coach of the McGill Redmen basketball team from 1988 to 1993.

In this difficult and overwhelming period, he has kindly granted us a few minutes of his time to talk about his role with the Alouettes and to explain the many changes that COVID-19 could cause in his work when football resumes in Canada.

2 very distinct periods in a year

Football is a unique sport for many reasons, one of them being the short duration of the season, along with the low number of games played compared to other disciplines. This is due to the extreme level of physical intensity and the repeated forceful impacts that cause lot of the strain on an athlete’s body. The two factors combined explain why being closely monitored by the medical team is so important. But the role his crew has to play differs depending on the time year. “In the off-season, I’m called in to work mainly during very specific periods, such as free agency or the draft. At the request of the general manager, I can be asked to examine medical records or past injuries of prospects considered for the team and to discuss about the results of my analyses with him if needed. A big part of my role is to look at the injuries that players may have had with other teams to help our GM and head coach decide if, when recovered, these athletes could potentially be valuable assets for our organization.”

The work continues throughout the training camp during which Dr. Lacroix and his team have their first contact with the players. “I have to prepare all the preseason examinations, which usually take place at the Montreal General Hospital. We must evaluate all the players that participate in the training camp, verify if all the injuries from the previous seasons have healed, and check if there is any other trauma or medical condition to monitor or treat.” 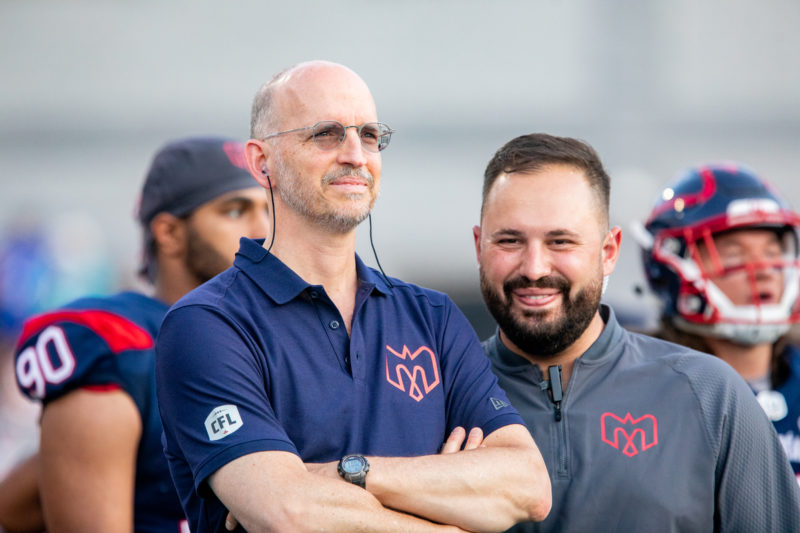 Shortly after comes the regular season during which the bulk of the doctor’s work is focused on treating the injuries that happen at practice or during games, and on rehabilitating injured players in order to get them back to their full potential as quickly as possible.

COVID-19 will inevitably change the way we work

Over the past few weeks, we were able to observe how the crisis was managed in different leagues around the world. Of course, there are very serious financial consequences for the organizations, but the priority has to remain the health of the players, the personnel and the fans. Due to the virus, there will evidently be a shift in Dr. Lacroix’s routine with the team this year. Regardless of the decisions that the leagues take for the 2020 season, the training camp, if it happens, will most likely be truncated and the medical crew won’t have as much time as usual do its evaluations. “It will undoubtedly be more complicated this year with COVID-19. We can imagine that athletes coming from another country will have to be in quarantine for 14 days before being able to interact with anyone on the team. We will have to take even more serious measures through screening tests for all players and employees. We will have to until we have the possibility to do regular screenings and get the results quickly before even thinking of going back to doing any activity that would involve group gatherings. For now, athletes are limited to individual training.”

According to him, having the tools to do regular tests will be primordial in order for games to happen. “In a way, we could assume that football would be one of the last sports to resume activities due to the close contacts between players, but if we are able to test regularly, hence guaranteeing that everyone on the field is healthy, the players will be able to play safely.”

It will remain a priority to ensure the reliability of the screening tests in order to avoid contamination among the group, which would force the team, or at least a big part of it, to go into isolation, hence disrupting the remainder of the season for the entire league. “Despite it all, we have to remember that our men are overall very healthy. Close attention will have to be given to those who may have hypertension or diabetes. However, we must also take into consideration that fact that the athletes are often surrounded by a lot of people, including older ones who could be more vulnerable,” explains the doctor.

In the different scenarios suggested for sports to resume worldwide, some have evoked the idea of using special masks to play. This could be possibility in football, according to our head physician. “There could always be a way to modify the helmet and install transparent visors to limit the spread of droplets during practice and games. But then again, if we can ensure that everyone on the field is nor contaminated or contagious, this type of initiative may not be necessary.”

Since the beginning of the pandemic, Dr. Lacroix has reached out to the players and coaching staff a few times to give them information about the virus, from the recommended hygiene measure to adopt to limit the spread, to the latest news about its evolution. And in the meantime, he’s preparing for his next challenge: to prevent injuries from happening once the guys get back to their regular training coming back from such a long break.

After 24 years of tending to our athletes, our head physician and his colleagues will be more dedicated to the team than ever. No matter what scenario plays out, our men will have to be very closely monitored in order to do what they do best on the field, as safely as possible.

Thank you for your precious time Dr. Lacroix.