Securing top talent…from one coast to the other

Securing top talent…from one coast to the other

Last Thursday, ten promising young football players across Canada received a call from Alouettes general manager Danny Maciocia that would forever change their life. After taking part in hundreds of football games at amateur level, spending countless hours training and going through a handful of interviews with scouting directors and general managers, these athletes will finally get the chance to realize their childhood dreams of playing professional football.

Heading into the draft, Maciocia had two priorities: stocking up on local talent and landing solid players who would be able to make an impact in Montreal in the near future. He delivered on both matters by selecting five local athletes from the RSÉQ, along with adding five others young men from the rest of Canada who have the potential to help our birds reach new heights.

We chatted with Cameron Lawson, Carter O’Donnell, Andrew Becker, Brock Gowanlock, and Colton Klassen to learn more about them and get their thoughts on the journey they’re about to embark on.

The moment draft prospects receive the long-awaited call is always a very special one, usually spent among friends and family. In these times of quarantine and social distancing, gathering in large groups was out of the question, but these guys still found ways to celebrate the big news … with the help of technology, of course. “It was funny, my parents and my sister both stood up and started recording. I was on a video call with all of my teammates and friends, and they were all screaming and happy for me. It was a lot of fun to finally get drafted and have everybody be so thrilled for me,” explained Cameron Lawson, defensive lineman from Queen’s University.

“I was with my two parents at home, so I just celebrated with them,” said offensive lineman Andrew Becker from the University of Regina Rams. “It was kind of crazy. My phone was blowing up and I was trying to get back to everyone congratulating me.”

You could hear a mix of enthusiasm and relief in their voice. “It’s just so exciting,” said Gowanlock, an offensive lineman from University of Manitoba. “It’s a weight off my shoulders for sure. I had my family around and it was nice to give them something to be proud of. I worked for this my whole life and I’m just excited for the opportunity.” 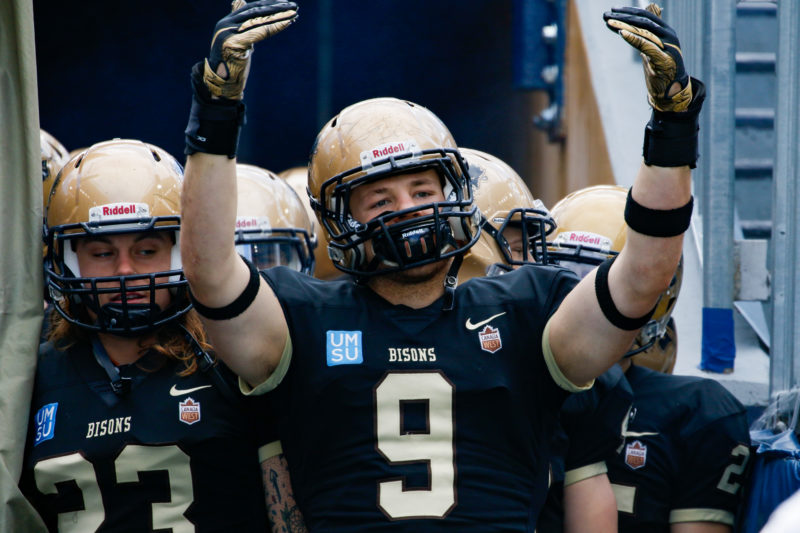 It’s a dream come true, but our young athletes know it’s not going to be an easy road and they are more motivated than ever to show that they deserve their spot in the roster. “I’m just looking forward to getting in there, competing and fighting for a spot,” stated Lawson. “It’s definitely different to go from being a starter on your college team to being at the bottom of the totem pole again,” explained Colton Klassen, a receiver for the University of Saskatchewan Huskies. “It’ll be a new challenge and I’m excited to embark on this new journey.” And Colton has a good role model to guide him along the way. The Huskies’ head coach is none other than Scott Flory, who was drafted by the Alouettes in 1998 and spent his 14-season career in the nest. “It’s an honour to be following in his footsteps,” he added.

These guys realize that they are now on the same plane as veteran players, athletes they’ve been watching for years. For many young athletes, this is as exciting as it is daunting. “I’ll be competing against full grown men, real professionals. We’re used to seeing these guys on TV and now they’re teammates,” Klassen said.

All five are incredibly eager to learn from the big guns, from the likes of Vernon Adams Jr. to John Bowman, and to get to work under the watchful eye of our coaching staff. “I’m just excited to be taught by professional coaches,” said Lawson. “Honestly, I can’t wait to go against everybody and just test my skills.” 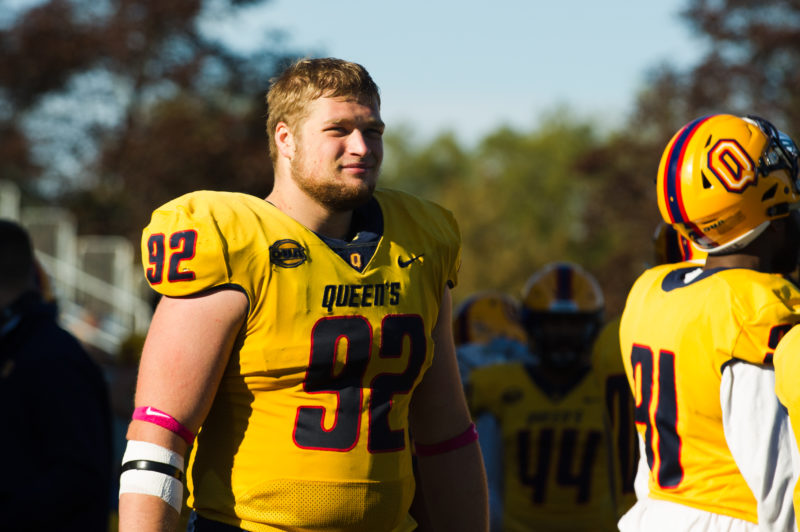 “I’m pumped to have the opportunity to learn from a guy like John Bowman. He’s been around the league for a long time. I can’t wait to pick up knowledge from a lot of players who have much more experience than me and who are obviously doing good things to stick around in the league. I’m excited to get there, embrace the experience and just try to learn from everyone I can,” explained Brock.

Alberta Golden Bears lineman Carter O’Donnell too feels ready for the challenge. “I look forward to climbing to the next level, meeting the coaches and getting that experience as a professional player.”

Honestly, I can’t wait to have that professional lifestyle and start training to be the best that I can be,” stated Brock. “Just focusing on sports and trying to win a championship for sure. Yeah, I would say that’s probably the most exciting part for me, really developing into the best player I can be to hopefully bring home a Grey Cup to Montreal.”

Adding to that excitement is the anticipation of moving to a new province, hundreds of miles away from their friends and family. “I’ve never been to Montreal, but I heard the city’s amazing, said Becker. “I’m super happy be a part of such a good fan base.” Yes, we do have some incredible fans here in Montreal … so special that they even talk about them in Regina! 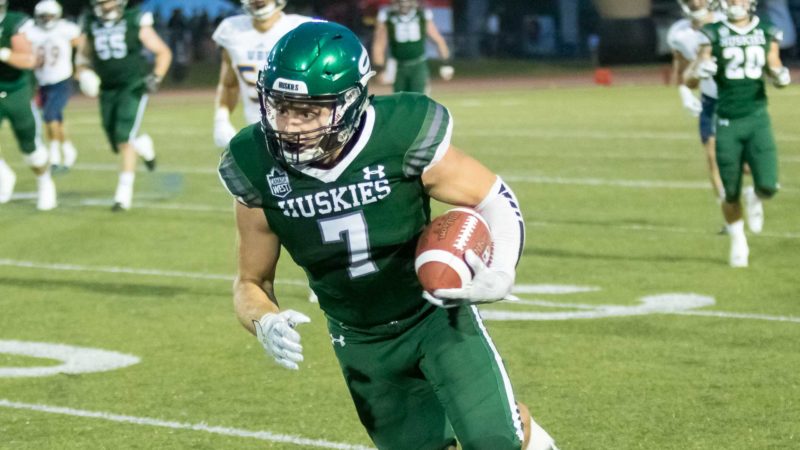 Out of the five guys, only Lawson has spent time in our beautiful city. “I have family out there and a bunch of friends, I’ve visited a couple of times. I know Chris Osei-Kusi on the team.”

Although the rest have never stepped foot in Montreal, Klassen and Gowanlock already know one or two players on the roster. Getting acquainted with new teammates is always exciting, but you can’t underestimate the value of having a few familiar faces in a novel environment. In fact, Klassen is good friends with Benjamin Whiting, who was drafted by the Alouettes last year. “When he heard I was picked by the Alouettes, Ben told me that I would have to start practising French,” Klassen said laughing. Gowanlock is joining former Bisons D.J. Lalama and Landon Rice on the Alouettes roster. “I don’t personally know Landon, but D.J. and I have been talking and we’re probably going to catch up when I get back to Winnipeg.” 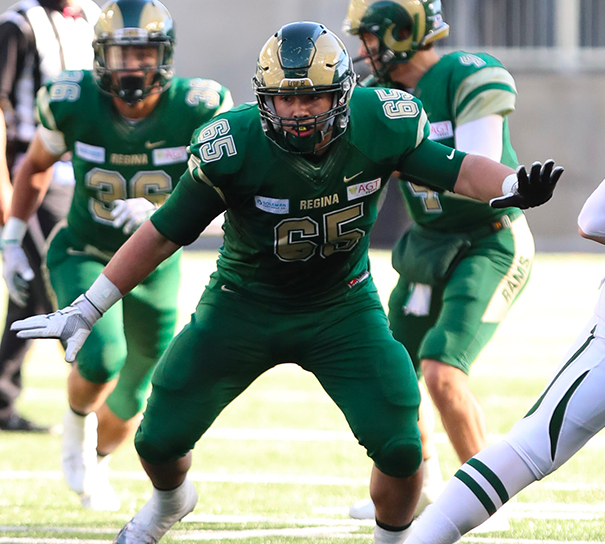 The reality of their CFL dream is starting to sink in and these guys are not about to rest on their laurels. If anything, they’ll be doubling down on efforts over the next couple weeks to guarantee they’ll be in top shape for training camp, both physically and mentally. “I want to make sure the psychological side is ready. I think it’s going to be very important, especially if we have a short training camp. I’ll have to come in and learn things quicker than usual,” said Becker. “I’ll prepare mostly by looking at film and watching a lot of Alouettes games to see how they run the plays and to analyze the techniques they use.”

Currently in B.C., Gowanlock is planning on heading back to Winnipeg soon get camp ready. “ I’m going to focus on increasing my endurance, because I heard CFL camps are quite a grind, so I’ve got to be at my best. A couple of guys who were drafted last year will be getting together to train, practising some social distancing, of course. I’ll try to join them and get some work in so I can be ready for Montreal.”

They know that once they make it to camp, they’ll have a short window to impress the coaches. Although they’re not exactly sure what to expect, they’re excited to get to work so they can be as prepared as possible for their big moment comes. When asked about his preparation moving forward, O’Donnell kept it short and sweet: “I’m just going to keep training hard and be ready for anything.” 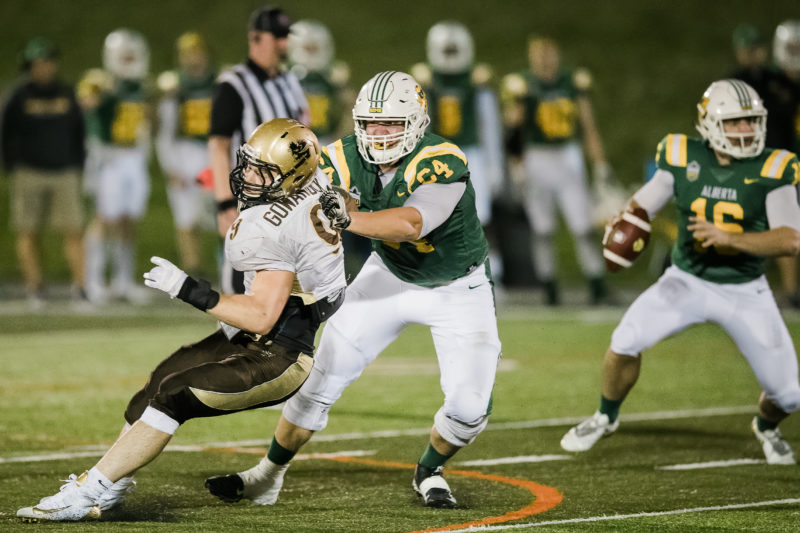 “It’s different because I’m used to being around 20, 30, 40 guys at a time and now I’m by myself. I’ve had to adapt the way I train, but I have all the tools to make sure that I’m still training and getting better each day. In these times, you have to be intrinsically motivated,” wisely explained Klassen.

As Lou Holtz once said, “Ability is what you’re capable of doing. Motivation determines what you do. Attitude determines how well you do it.” Ability. Motivation. Attitude. After chatting with them for a few minutes, it’s clear that these five phenomenal athletes have all the ingredients to achieve greatness. This is just the very beginning of a long but exciting road for them. See you in Montreal, gentlemen!