Looking back on our top draft picks – Part 3: Local talent

Looking back on our top draft picks – Part 3: Local talent

Quebec football has proven to be one of the most explosive breeding grounds of young prodigies in the country and incredible talent has come out of the province. Each year, the draft remains the best tools for the Alouettes to stock up on local phenomenons.

A handful of athletes across the province are impatiently waiting to see if they’ll be selected in tomorrow’s CFL draft. In the meantime, we thought we’d look back at some of the Alouettes’ best homegrown picks in history!

Selected 5th overall in the first round of the 2005 CFL draft, safety Matthieu Proulx spent his six-season career with the Alouettes. Almost immediately, Proulx showed the organization that they had made the right decision to choose him and was runner-up for the 2005 CFL’s Most Outstanding Rookie Award.

While delivering great performances on the field, Proulx was also studying law in Montreal and passed the bar in 2009. He was able to combine his two passions and pursued a career in law during the off-season. The two-time Grey Cup champion (2009, 2010) amassed 98 defensive tackles, 46 special teams tackles, 9 interceptions for a total of 172 return yards, 2 tackles for a loss, 8 forced fumbles, 3 fumble recoveries and 10 knockdowns during his time in the nest and was awarded with a CFL All-Star title in 2009. He suffered his share of injuries, but the last straw was a torn ligament in his knee right before halftime of the CFL East Division final in November 2010, which sidelined him for the remainder of the championship. He announced his retirement in March 2011. 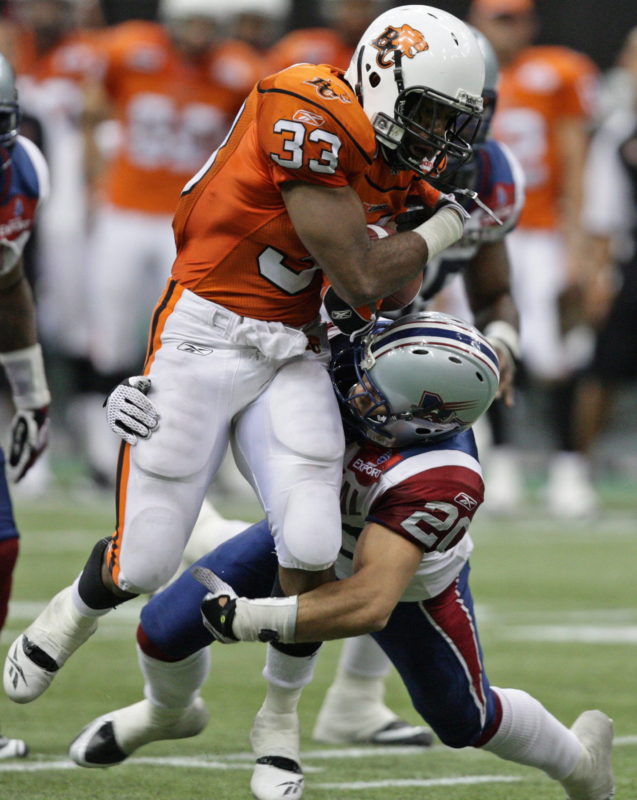 Since then, he put his law career on hold to pursue a career in communication and media. He is now a host and a sports analyst for RDS and collaborates on many other platforms.

Selected 48th overall in the sixth round, which was the last selection of the 2008 CFL draft, All-Star offensive lineman native of Saint-Hyacinthe had a remarkable 11-season career with the Alouettes during which he played 167 games.

Brodeur-Jourdain won two back-to-back Grey Cup championships with the Alouettes in 2009 and 2010. His outstanding performance on the field in 2012 earned him CFLPA All-Star, CFL All-Star and East division All-Star nods. The following year, he was named Alouettes’ Most Outstanding Lineman. He was awarded with another East division all-star distinction in 2014. 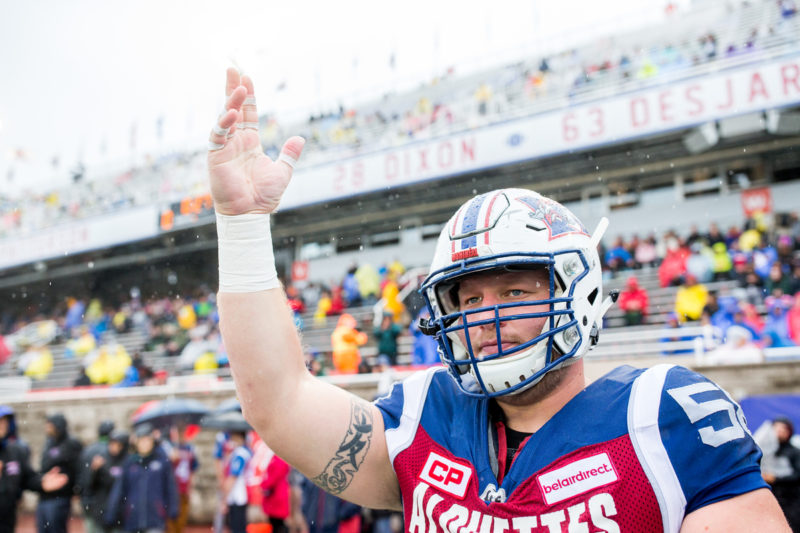 During his time with the Alouettes, he was heavily involved in various Alouettes’ community programs including Together at School. He retired after the first home game of the 2019 season and was hired as an assistant offensive line coach for the Alouettes just a few days after.

Selected 14th overall in the second round of the 2009 CFL draft, the Quebec City native is about to start his twelfth season with the Alouettes. He proved to be a valuable addition early on ranking third in the Alouettes for most special teams tackles in 2009 and 2010, and helping the club win two Grey Cups.

After suffering a few injuries that sidelined him for parts of the 2013, 2014 and 2016 seasons, our long snapper came back healthier and stronger than ever in 2017 to collect 8 special teams tackles. That year, he won the Alouettes’ Most Outstanding Special Teams Player award. He also accepted the Jake Gaudaur Veteran’s Award last November (2019), awarded to a Canadian CFL player who best demonstrates the attributes of Canada’s veterans. 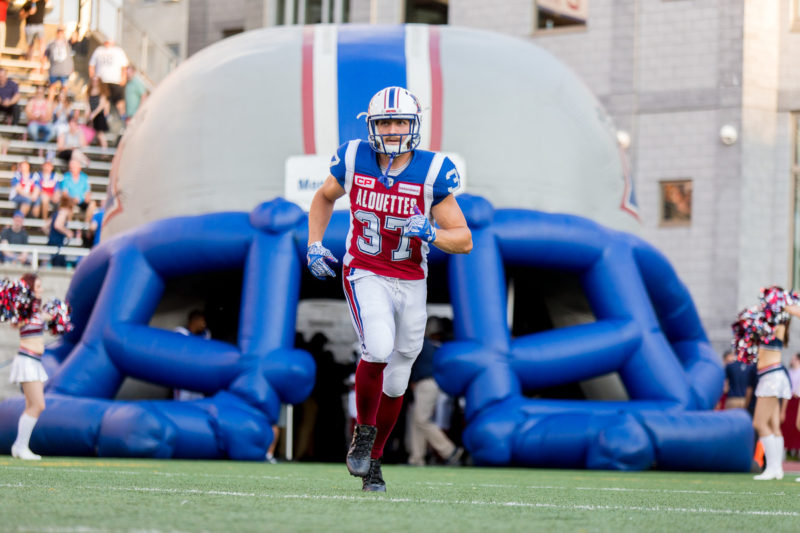 Throughout his time with the Alouettes, he has always been heavily involved in the team’s community programs, including Together At School. He spends his off-season working as a financial security advisor.

Selected 7th overall in the first round of the 2006 CFL draft, wide receiver Eric Deslauriers spent his entire nine-season career with the Alouettes. In his first year, with very limited playing time, he was able to accumulate 23 receptions for 325 yards and 1 touchdown.

During his time in the nest, he played a total of 115 regular season games and recorded 99 receptions for 1,334 yards and three touchdowns. He raised the Grey Cup twice with the team, in 2009 and 2010. He gained an important first down on a fake punt in the 2010 Grey Cup game. He is widely remembered for catching Anthony Calvillo’s historic 395th touchdown pass in 2011, which allowed the CFL’s most prolific passer to climb into first place all-time in that category. 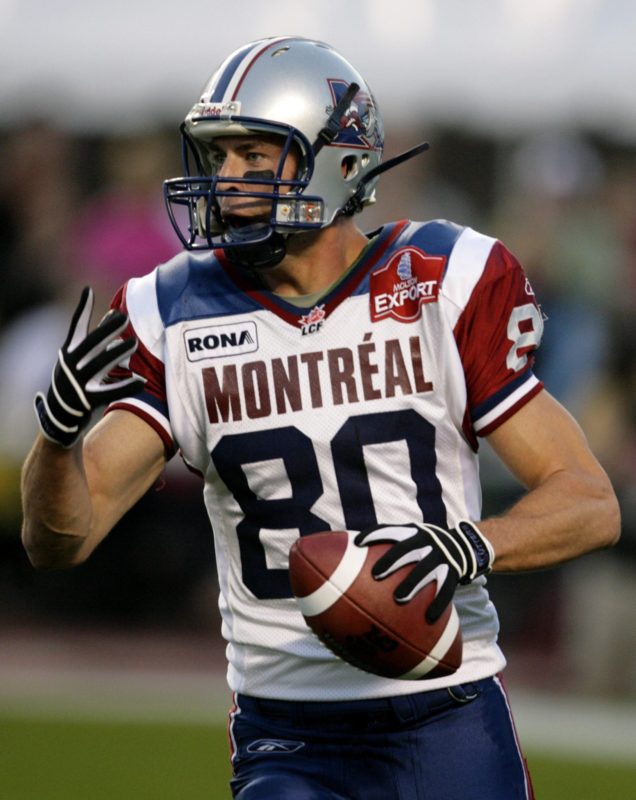 Deslauriers retired as a player in February 2016 and remained with the organization as a football operation  assistant and scout. He became Player Personnel Coordinator in July of 2019 and was promoted to the position of Director of Football Operations just a few months later.