Looking back on our top draft picks – Part 1: Offence

Looking back on our top draft picks – Part 1: Offence

The right draft pick can change everything. A quick look at Alouettes’ history will show just how important the draft has been to the team. And if we have learned anything since our very first draft, it is that great talent can be selected with any pick.

To kick off the 2020 CFL draft week, we’re looking back at some of the Alouettes’ best picks in history. We broke down our top draftees into three categories: offence, defence and Quebecers. We’re starting with four of our best picks in offence.

Selected in the second round, 18th overall, in the 1996 CFL Canadian Draft, Chiu quickly became a prominent figure in Montreal, playing 218 career games during his 13 seasons with the team. He set a new Alouettes record in 2009 for most games played.

He was honored as both CFL and East division All-Star for six consecutive seasons, from 2000 to 2005, and ended his career with a total of 9 CFL East All-Star titles and 7 CFL All-Star titles. He was also named six times to the CFLPA All-Star team and won the CFL’s Most Outstanding Lineman award in 2002. 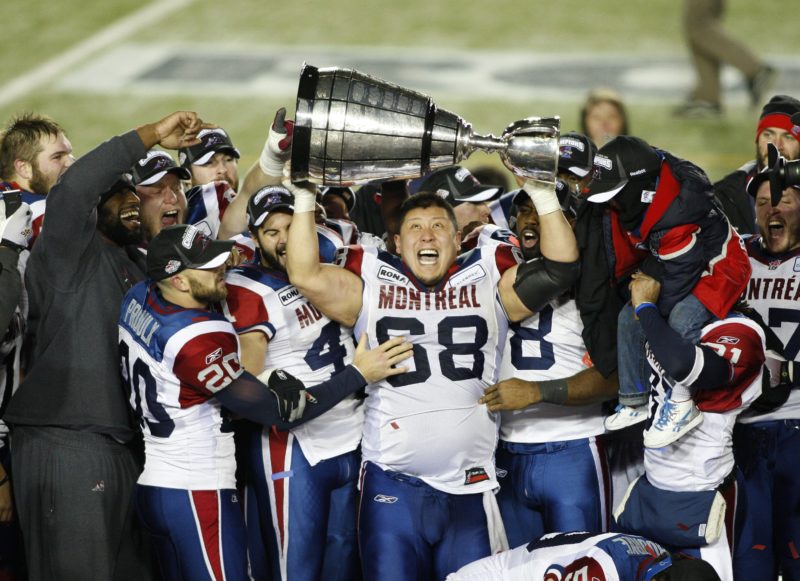 During his last two seasons with the team, Chiu helped the Alouettes’ offence record more than 600 points per year. His last career game in 2009 will have been a memorable one, as he hoisted a Grey Cup for the second time in his career after a 28-27 win over the Saskatchewan Roughriders.

Drafted in the first round, sixth overall, in the 1998 CFL Draft, Ben Cahoon played his 13-season career with the Alouettes. He played a total 224 games, accumulated 1,017 receptions, 13,301 receiving yards and 65 touchdowns, and won three Grey Cup with the team. He is ranked third in the CFL for most career pass receptions, and fourth for most seasons with 1000+ pass receiving yards. He was the CFL’s all-time receptions leader at the time of his retirement. 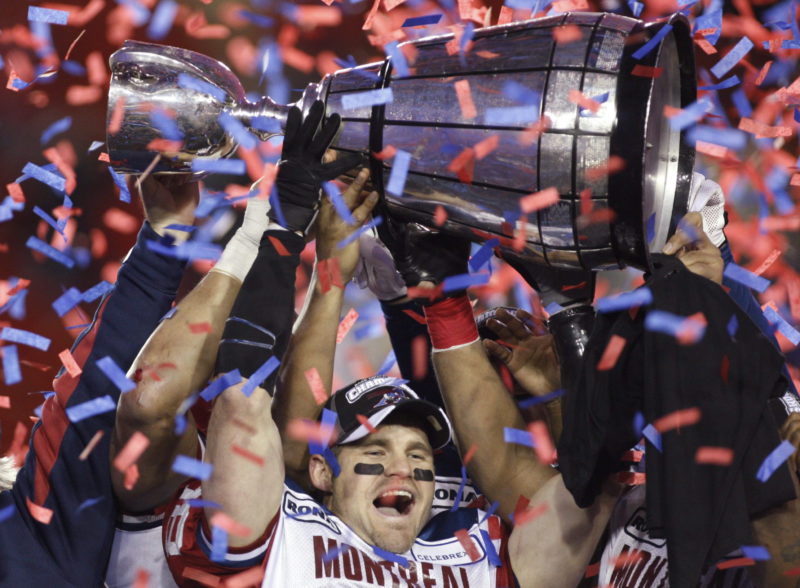 His most successful season was in 2003, where he caught 112 passes for 1,561 yards. With those incredible numbers, he won the CFL’s Most Outstanding Canadian award for a second consecutive year. During his time with the Alouettes, Cahoon won 10 East division All-Star titles, 3 CFL All-Star honors and earned the Grey Cup Most Valuable Player award in 2003 and 2009.

The infamous #86 was inducted into the Canadian Football Hall of Fame in 2014. After his retirement, he joined the coach staff at Brigham Young University. He took a step back from football in 2017 to become a sales representative for a protein bar company based in the United States.

The three-time Grey Cup champion accumulated 11 consecutive CFL East All-Star distinctions from 2002 through 2012, and a total of 9 CFL All-Star titles of the course of his career. He was also named three times to the CFLPA All-Star team. 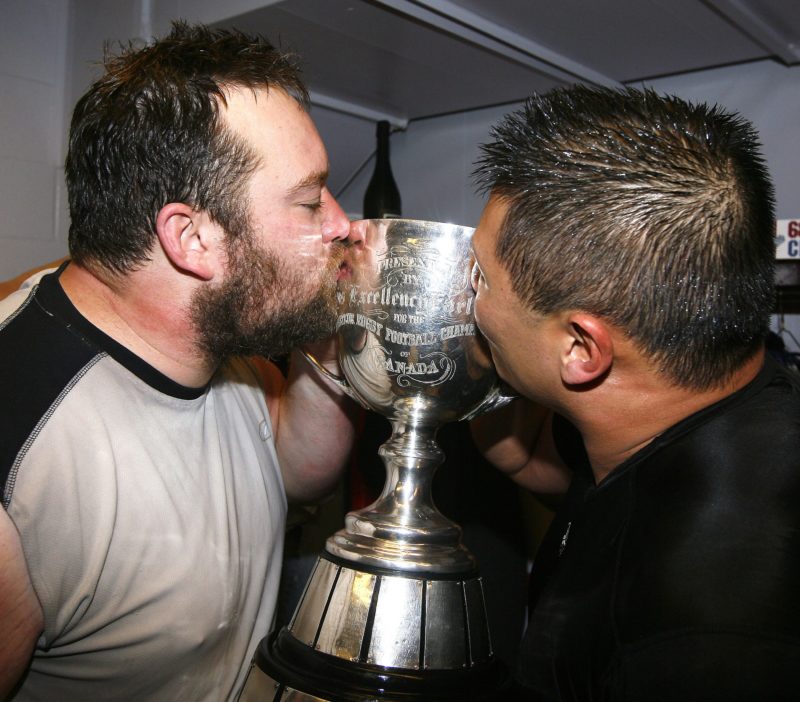 After his announcing his retirement in May 2014, he moved on to join the coaching staff of the University of Saskatchewan’s Huskies. He was also President of the CLFPA from 2014 to 2016.

Chosen first overall in the 1972 CFL draft, Larry Smith went on to play his 9-season career as an Alouette, during which he established himself as one of the top Canadian running backs. When he retired in 1980, he had accumulated a total of 1,646 rushing yards and 238 catches for 2770 yards. He hoisted the Grey Cup twice as a an Alouettes player, first in 1974 and again in 1977.

Twelve years after his retirement, in 1992, he became commissioner of the CFL. One of the positives that came from his four-year reign is undoubtedly the revival of the Montreal Alouettes franchise.  Smith moved on to assume the role of president and CEO of the newly revived franchise from 1997 to 2001, and again from 2004 to 2010, thus adding two Grey Cups to his record. He was also Senator for the Conservative Party of Canada. 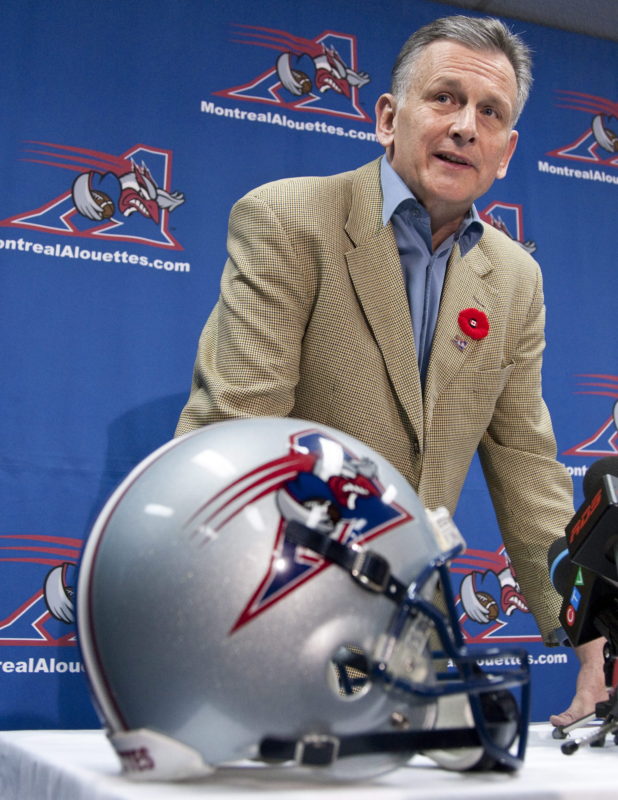 He has received numerous awards over the course of his career, including the Commissioner’s Award in 2001 for outstanding service and dedication in promoting and preserving the CFL. He became Knight of the National Order of Quebec in 2010 and was inducted into the Quebec Sports Hall of Fame in 2015 under the category of “Builder for Football”.