It’s Thursday July 4. The day we have all been waiting for has finally arrived… it’s the home opener!
We’d be lying if we said that our fans were feeling particularly optimistic about what was about to unfold.

Our Head Coach and GM had been fired less than a month prior, we had lost our first two battles (from which we had learned a lot, of course, but still lost…), and we were about to go against with the Tiger-Cats, who had beat us 41-10 the week before. Things were not looking great for us.

But another factor comes into play; It’s our gentle giant Luc Brodeur-Jourdain’s last game, after twelve incredible seasons with the organization, and his teammates want to give him the retirement gift he deserves… a big ol’ win. 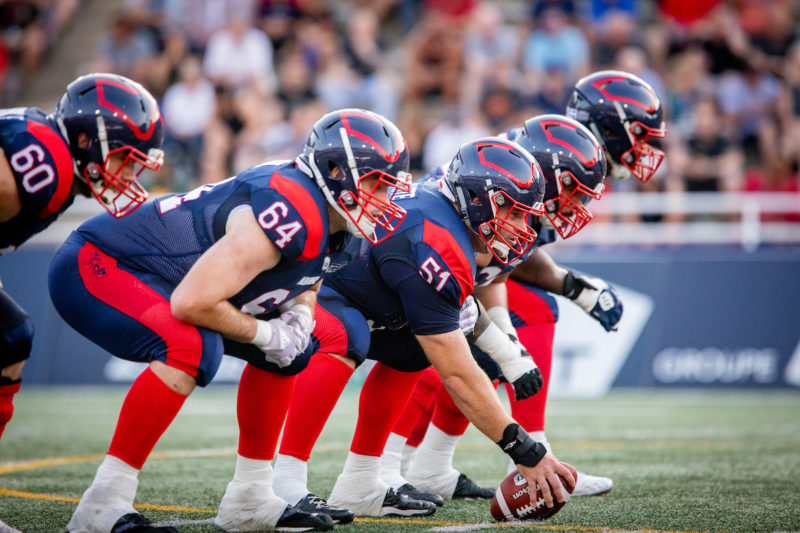 It’s a strong start for our Alouettes, beginning the battle with a field goal following a 60-yard drive led by Vernon Adams Jr. Later in the quarter, we get the ball back thanks to an interception by our defence. Stanback then scores his first touchdown of the game. Just like that, the mark is 10-1 for our Als. The Ticats step it up during the second quarter and take on an 18-13 lead heading into halftime, but our men are not fazed by that… not one bit.

We dominate the second half. Our new dynamic duo, Vernon Adams Jr. and William Stanback (who will end up running for more than 200 yards in one game and become the first Alouette to achieve this feat since Mike Pringle in 1998) produce spectacular plays over and over again, including a trick play we’ll never forget… Stanback makes a diversion, passes the ball the Geno Lewis, who then throws it to VA through a beautifully executed pass. A few yards later, our QB is in the end zone, and it’s another touchdown by our Alouettes!

LBJ, who was only supposed to perform one or two plays at the beginning of the game, has the chance to witness these glorious moments up close and personal as he steps back on the field, taking over for injured Sean Jamieson. Despite retaliation from the Tiger-Cats, Stanback makes his way through the Ontarian defence to end up once again in the end zone, which gives our Als a definite advantage.

The final score is 36-29 for our Alouettes. Little do we know that will be the first of many spectacular feats from the offence and of a series of very eventful second halves. It’s an incredible performance for Stanback and the best parting gift we could give our gentle giant.

In his post-game press conference, Coach Khari concludes with the following: “I like the makeup of our team and I said that from the beginning. I saw some opportunities to make plays with these guys and we just made more this time than in the first two games. If we can run the ball for 200 yards every week, then let’s do it, but I just want to be a team that does whatever needs to be done to win football games.”