Jean-Gabriel Poulin was just a guy from the South Shore of Quebec City before being drafted by our Alouettes in the third round, 23rd overall, of the 2018 CFL Draft. Like many others who aspire to become the cream of the crop in their line of work, he had to overcome several hurdles to get where he is today.

It’s 8 a.m. on an icy January morning and Jean-Gab is ready, standing in front of approximately sixty young and drowsy football players of Jacques-Rousseau High School, in Longueuil. “When you face obstacles or problems in life, playing the victim is never the solution,” he commenced. “I’m here today to teach you methods that will help you be proactive. I’m going to explain how I was personally able to shift my mindset in order to stay in control of my situation.”

Thanks to the team’s Together at School program, every year, since 1998, a dozen of our men address high school students across the province to encourage them to persevere through their academic career and learn from their hardships. Jean-Gab is part of the program’s 2020 edition.

“My parents always made a lot of sacrifices for us. I played every sport there is, but I realized, as I grew up, that my reality was different than that of the people I was going to school or playing football with.”

Jean-Gab was one of those kids that had to work on the weekends to earn a couple dollars. While his friends were out wakeboarding, he was packing fish at the neighbourhood IGA. Looking back on the past, he’s well aware that his situation was far from pitiful, but the disparity between him and most of the kids he knew truly took a toll on his self-esteem for a while.

“I was also small, smaller than others,” says the linebacker who, now, stands at 6 feet, 217 lbs. “I had so much heart, but my body just wasn’t following. So, I started to work out a lot, I grew and became the biggest of the bunch. I got better at football, but my confidence was still fragile. I was still angry because I felt different so, to change mindsets, I decided to change my environment. After high school, I went to Vanier College.” 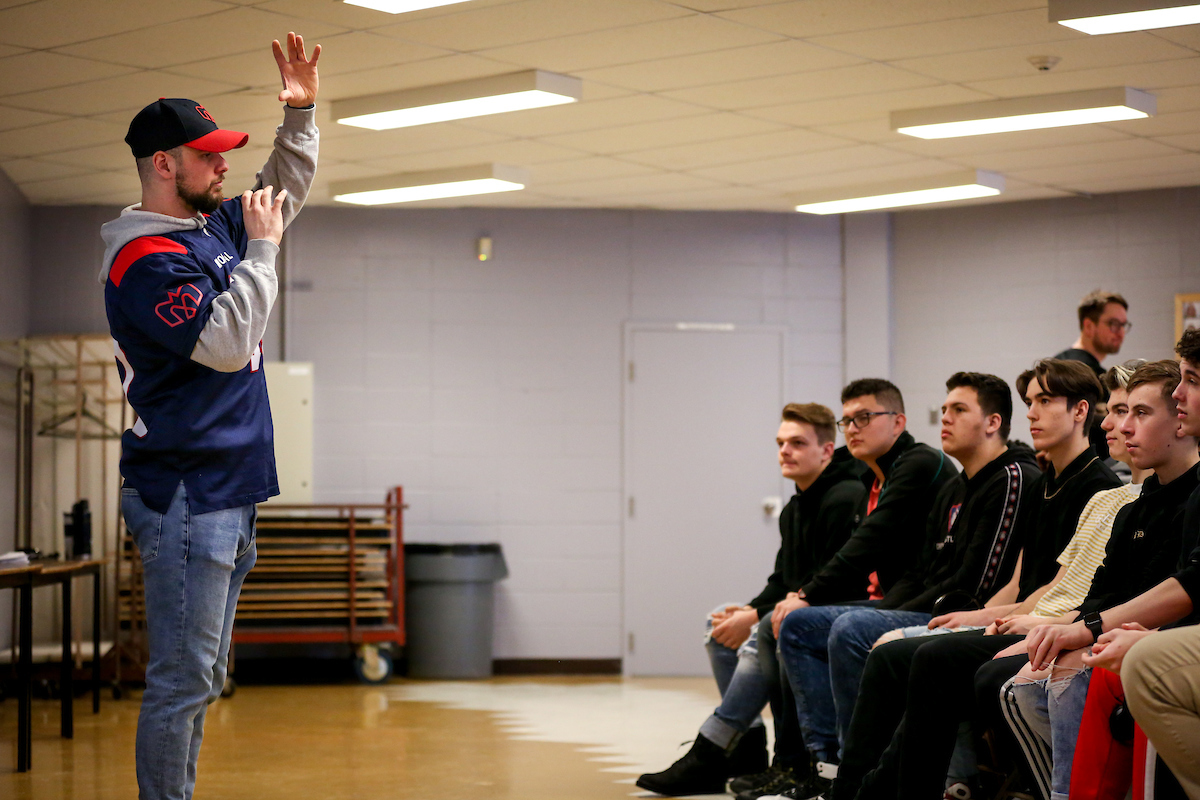 And that’s when Jean-Gab, just a guy from the South Shore of Quebec City, packed his bags and moved to Montreal where he would attend an English Cegep. He never regretted making the move, even if the road wasn’t easy there either. Even if he was told no for the first time of his football career when Team Canada didn’t retain his services.

“I didn’t let it affect my morale,” he recalls. “I started training like a mad person and believed they would regret it one day.”

As a matter of fact, the call came through two months later. One of the guys on Team Canada just wasn’t ready. Jean-Gab, on the other hand, was. He arrived at camp seventh on the list at his position. He left as the starting middle linebacker. That year, his squad beat Team USA in the final matchup.

But Jean-Gab still didn’t get everything he wanted. Despite Team Canada’s great performance, the linebacker didn’t receive any offers from NCAA teams the following year. That was the second time he was being told no and, once again, he opted for the same approach.

“I wanted universities to regret not having selected me. Then, I committed to Western University, in Ontario, where I spent the best four years of my life. It was hard, but it was all worth it.”

Jean-Gabriel wasn’t off the hook just yet. Towards the end of his first season with the Western Mustangs, the linebacker dislocated his elbow, an injury that forced him to stay away from the game, but also hindered his ability to finish his assignments and exams.

“I had to rest, but, at that time, all I could think of was the mountain of work I had to finish by the end of the school year. It was stressful,” he admits, “particularly because I still wasn’t very comfortable speaking English. I decided to talk to my coach and he recommended I asked my teachers for help. I listened. Everyone understood and agreed to accommodate me. The moral of the story is: talk to your teachers, talk to your coaches. We’re meant to have a support system and these people are trained to help you.”

Then, at his third varsity season, Jean-Gab suffered from a bad shoulder injury. Four and a half months prior to the East-West Bowl, he underwent a surgery that usually requires six months of rehabilitation. Missing the East-West Bowl, however, wasn’t an option for the linebacker who was well-aware that the game is nearly a rite of passage for players aspiring to become pro.

“I learned some lessons from my experiences and I knew I wouldn’t get what I wanted by simply feeling sorry for myself. So, I asked for help. Lots of help. From doctors, physiotherapists and my friends and family. Three days prior to the game, the doctors gave me the green light to play. I was even named West Team captain.”

Then, Jean-Gab ended his university career on the best possible note: he won the Vanier Cup against Laval’s Rouge et Or. He became successful by playing the cards he was dealt, by remaining in control of the situation and, mostly, by asking for the support he needed. 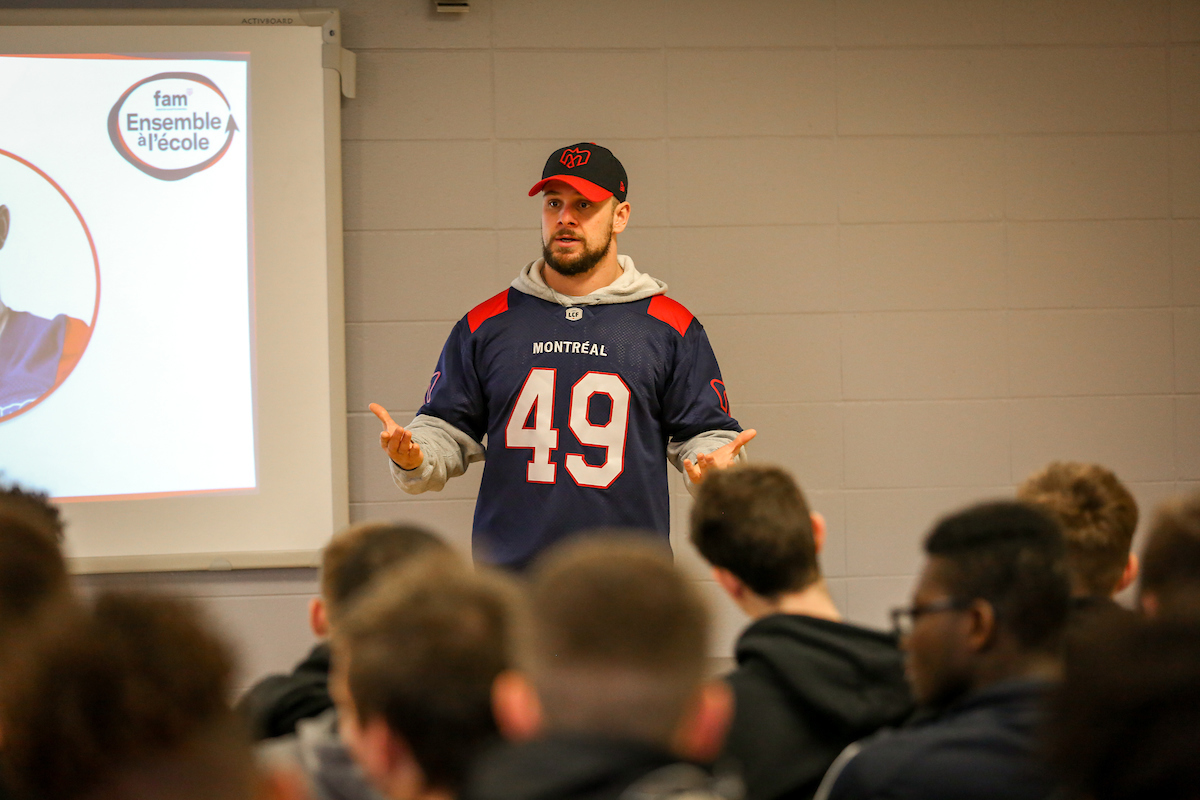 A Glimmer of Hope

Jean-Gabriel is just one of many who had to surmount obstacles to achieve his goals, but hearing his speech offers a glimmer of hope to youth for whom university or even Cegep seem out of reach.

François Delarosbil, linebacker as well as defensive and offensive lineman for the Sphinx of Jacques-Rousseau high school, can definitely relate to Jean-Gabriel’s struggles. The thought of quitting school has crossed François’s mind plenty of times since he’s been diagnosed with several learning disabilities, including dyslexia, dysphasia and dysorthographia. Today, he’s on track to obtain his High School diploma and he even committed to Drummondville Cegep.

“In secondary two, I flunked all my classes,” the young man admitted. “I thought of just giving up, but thanks to my teammates, my parents and my coaches, I stayed in school. I worked hard to get better grades, I kept playing football and, now, I’m in secondary five and I’m thriving.”

François refused to let himself become a victim. Just like Jean-Gabriel. He kept pushing and, now, he isn’t afraid to dream big.

“When I see Alouettes players, I feel inspired by their path. It’s interesting to get to know how they got where they are today. It makes me believe I could go just as far.” 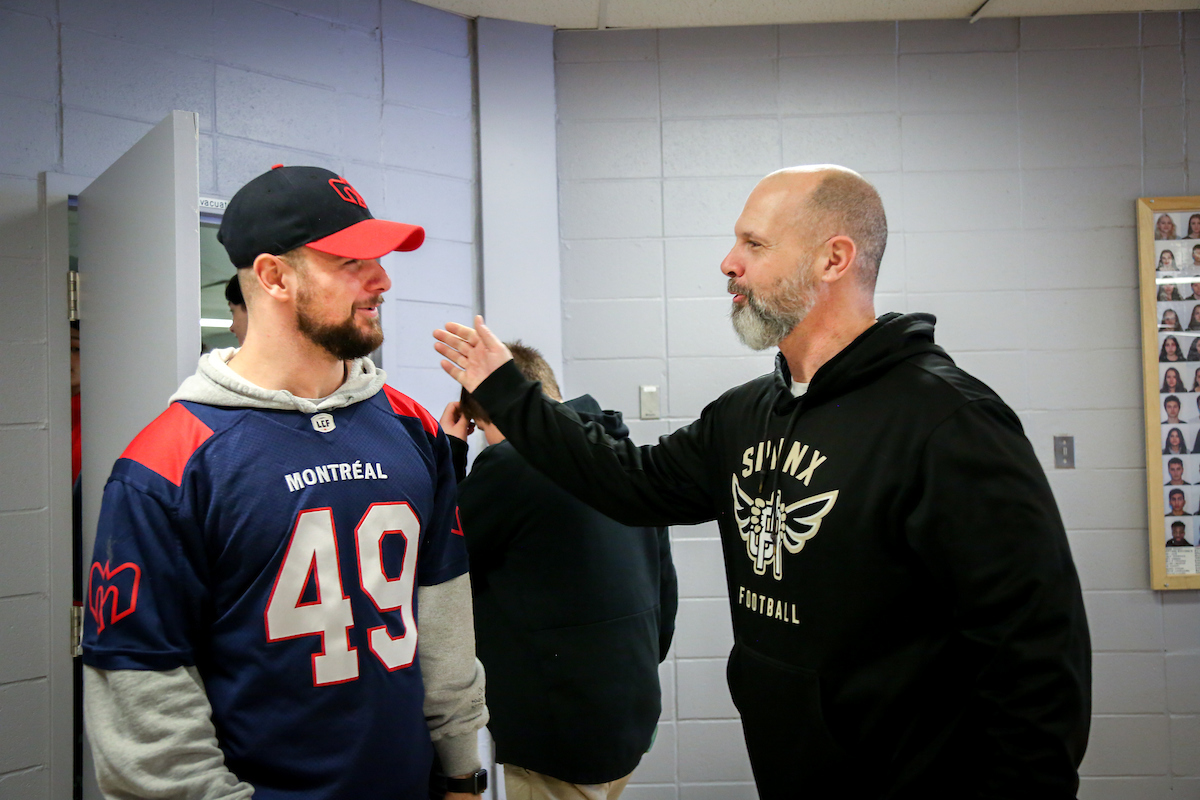 Promote Values of Determination and Perseverance to the Next Gen

“Kids these days are very hard to read,” Yves Rousseau admits. “But lots of them were wide-eyed when they met Martin. Some students even spoke to me about his speech afterwards and that, in itself, shows they paid attention and appreciated their experience.”

Since he began giving conferences through the program in 2010, Martin has inspired many, many students with a speech that focuses on two things: bullying and determination.

“He talked a lot about the notion of respect; self-respect and respect towards others. He also raised the subject of determination, a subject that many of our students could relate too, especially those who tend to give up when things don’t go their way. I think determination is a quality that should be reinforced in our youth.”

If the students at Curé-Mercure were so receptive to Martin’s words and if Jean-Gab was able to motivate the young football players of Jacques-Rousseau high school, it’s also thanks to those diligently managing the Together at School program.

“The guys receive specific training and perfect their speeches with professionals,” explains Sidney Ginchereau, Community Relations and Alouettes Foundation Coordinator. “Therefore, we know what topics they will address during their visits and are able to pair them up with the right schools. In other words, we take into consideration the reality of our audiences as much as possible to increase our chances of having a better impact.”

Throughout this offseason, our players will visit approximately 60 establishments across the province with the goal of encouraging over 10,000 kids to stay in school despite the challenges they will face. That’s a 23rd year of inspiring and inspiriting the youth.