Chemistry. It’s one of those words we hear over and over again in the football world. But while the concept is often associated to the bond between players, we forget how important it is for the coaching staff to have that same rapport.

When Khari Jones hand-picked his colleagues earlier this winter, his intentions were clear. He wanted outstanding coaches, foremost, but he also wished to keep fostering the positive atmosphere that propelled the 2019 edition of our Alouettes. Last week, the whole squad got together for the first time and, already, you could feel the connection and excitement. Out of eleven coaches, eight contributed to last year’s success, two are returning to a city that holds a special place in their heart and one is relinking with the man who taught him the ropes. A true family affair.

“We had a great family atmosphere last year and we’re going to have that again with Barron (Miles), Marcel (Bellefeuille) and Michael (Lionello),” says Khari Jones who personally knows all three of his new associates. “Barron is so passionate about the game, we were always able to talk on the same wave length, Marcel brought me into the league as a coach and I gave Mike his first job in the CFL when I was back in BC.”

Without a doubt, each addition brings something different to a table that was already well-garnished. 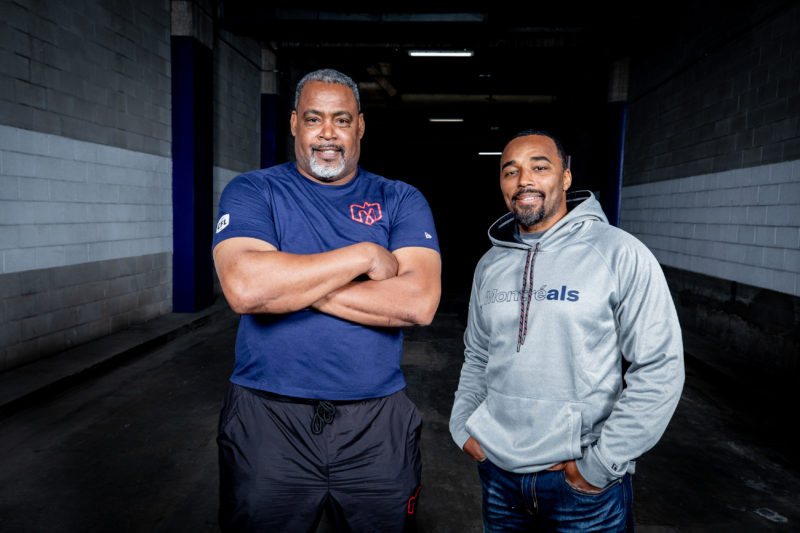 Hall-of-Famer Barron Miles back where it all began

Having played seven seasons in Montreal, Barron Miles is a 5-time CFL All-Star and Hall-of-Famer who finished his career with nothing less than 66 interceptions. He was a fan favourite as a Lark– being highly involved in the community – and there is no doubt his impressive resume helps him gain respect from players regardless of where he goes. As a Defensive Backs Coach and Pass-Game Coordinator, Barron will be a serious asset for Defensive Coordinator, Bob Slowik, in addressing the shortcomings that hurt our defence last season. Shortcomings that Barron saw firsthand on November 10 when his former team, the Edmonton Eskimos, gained 421 passing yards and beat our Alouettes in the Eastern Semi-Final.

Barron and Khari also won a Grey Cup together in Saskatchewan in 2013 and their friendship goes way back to when Barron was acquired by the BC Lions in 2005. The two had been entertaining the idea of coaching together for years, promising they’d hire each other as soon as one would get the opportunity. Visibly, Khari’s a man of his word.

Sidenote: the pals have nourished their competitive spirits throughout the years. They literally have rap battles and send each other bars in their free time. We haven’t heard them yet, but we’ll work hard to provide fans with a sample this season.

“It’s unbelievable the ties I have in Montreal. Two of my children were born here and are bilingual,” says the former All-Star who now has a decade of coaching experience under his belt. “Khari and I go way back, and so do Danny (Maciocia) and I. He was coaching here when I played. His wife would cook Italian food and we’d all go over to his place.”

“Barron and I went head to head at practice for four years. Let’s just say we had lots of fun,” remembers André. “He’s a great acquisition for us. He’s a great father and an even better man. The players are going to love him. He was always well-respected in the league and his deep knowledge of coverages is going to be a huge plus for us. The guys are going to want to listen to him.” 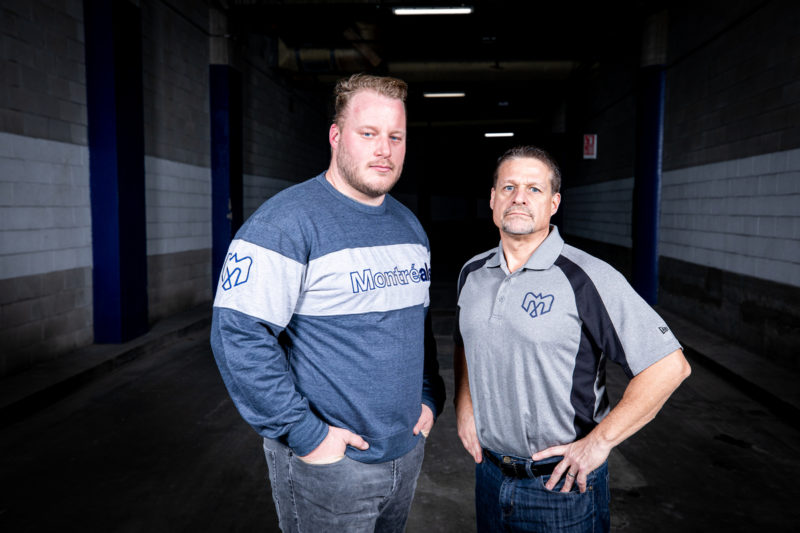 While Barron Miles comes in with legit playing credentials, Marcel Bellefeuille is one of those rare coaches who can confidently say he knows all offensive positions like the back of his hand. Over the course of his 15+ years of coaching at a professional level, Marcel played a variety of different roles including O-line Coach, Running Backs and Receivers Coach, Offensive Coordinator and Head Coach. He’s seen it all, partly in Montreal, where he was in 2006 and 2007, and throughout the country. Although, the o-line has always held a special place in his heart, he says.

“It all starts up front, regardless of what side of the ball you’re on.“

In three of his four years of working closely with the o-line in Saskatchewan, his squad led the league in rushing. Riders Andrew Greene and Gene Makowsky were also named offensive linemen of the year under Marcel’s watch. With the support of his knowledgeable assistant, Luc Brodeur-Jourdain, Marcel is expected to accomplish great progress with the big men up front. As a matter of fact, the pair has already been working closely together in preparing the season, knowing the team has retained the services of most of their key players for 2020.

“I’m ahead of the curve, thanks to LBJ,” says Marcel. “He’s been giving me a lot of insights about the guys. He’s played with some of them and that helps tremendously.“

And, of course, our new offensive guru has ties with our Head Coach. A family affair, we tell ya.

“Marcel allowed me to kickoff my coaching career,” Khari recalls. “He was the Head Coach in Hamilton when I started in 2009. I was with him for three years, we had some success there, I got to know him and his family well. Then, I had the opportunity to bring him over in BC as a Receivers Coach when I was Offensive Coordinator there. He actually stayed in our basement!“

Even if Marcel started off as Khari’s boss, he has no issues whatsoever with the roles now being reversed. His rich background and general knowledge of the game will certainly be an asset to our Head Coach whose plate is already quite full.

“The great thing about working with Khari is the culture he sets,” says Marcel. “You feel like you’re all collaborating. I believe in his vision and in how he does things.“ 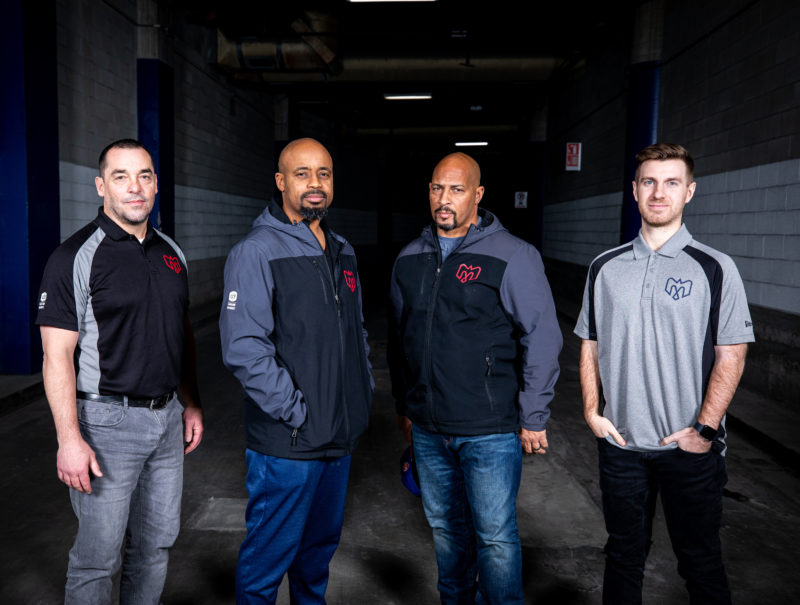 André Bolduc to the Rescue

If Marcel’s general offensive wisdom brings a lot to the table, André Bolduc’s continuous support will certainly take a load off our Head Coach’s shoulders. André, who was appointed Assistant Head Coach back in December, will keep his job as a Running Backs Coach in addition to helping Khari manage day-to-day duties. Knowing Khari was going to hold on to his OC title, André was thrilled when his boss made him his right-hand man.

“I knew the only way I could reach the next level in my coaching career was by becoming Assistant Head Coach. Since Khari advocates for collaboration and freedom, I was able to show him how much I was willing to get involved last year. I worked closely with him to manage schedules, supported him with playcalling, spoke up during meetings. All things I will be doing again this year as his Assistant. Khari and I complement each other very well, so there will definitely be a sense of continuity.“

Montreal on the Rise

Although new members were added to the mix, it’s pretty clear Khari Jones wanted to maintain a certain stability among his personnel. He recruited three of his closest collaborators in Barron Miles, Marcel Bellefeuille and Micheal Lionello (Offensive Assistant who was introduced to the CFL in 2016 by Khari Jones himself), but made a point to bring back seven out of ten of the guys who contributed to the team’s sharp rise last year. According to André Bolduc, the consistency certainly allowed the group to get a head start already, but it also helps making Montreal a compelling destination for players again.

“We were angry at the end of last season. Our hunger wasn’t satisfied. We really didn’t want it to end, so you can be sure we’ll be coming back more motivated than ever. We all kept texting each other, even throughout the Holidays, telling each other how excited we were for next season. I’m sure players feel that and I think the hype around the team will help us build a top-quality roster.“

With the coaches ready to get to work, the pressure lies on our GM Danny Maciocia’s shoulders to bring in the best players to fit our system. So far, so good, and there’s still lots more to come.

More on the Coaching Staff