Our Als cap off the 2019 season with a winning record

Our Als cap off the 2019 season with a winning record

“To come from a place where a lot of people didn’t even think we could compete and becoming a winning football team is pretty important. There was a reason to get that tenth win.”

He wanted a win, he got a win. He wanted a winning record, he got a winning record. Khari Jones can be proud of himself and his squad for ending the regular season on a positive note. With the wind in their sails – well, technically, the wind was all over the place-, our Alouettes defeated the Ottawa Redblacks 42 to 32 last night, gaining momentum right before heading into their first playoff game since 2014.

As a matter of fact, the story of this last game was about firsts.

The defence’s first touchdown of the season.

The team’s first winning record since 2012.

While many starters rested in the second half, the backups were expected to rise to the expectations. Whether they played to help the team cap off the regular season with a dub or to improve their chances of making the cut next season, the number twos certainly did the deed against a Redblacks team that wasn’t willing to give up.

Once again, we saw a group that was prepared to fight. Vernon Adams came out sharp throwing 13 for 16 and 126 yards in hardly two quarters. Matt Shiltz took over seamlessly and had himself a 100+ yard game too. Geno Lewis was four in four for 50 yards, proving that one DB is never enough. Rookie Dante Absher did his thing, finishing the night with 81 receiving yards. Our offence is playing like a well-oiled machine, ready to take on its biggest challenge of the year. Last November, who would have thought we’d be writing that?

On the other side of the ball, things already seemed more fluid than last week. Henoc Muamba’s contribution certainly had something to do with it but DJ Lalama’s 10 tackles and one sack should not be ignored, nor should Najee Murray‘s game-settling pick-six. And, well, how could we forget to mention Boris Bede who offered another perfect performance.

The pieces of the puzzle have come together. Although there is still a lot to work on going into the playoff week according to Khari Jones, our guys sure have learned how to play cohesively this season. A coaching staff like the one we have will do that. It’s a team effort and we’ll need you on our side on Sunday, November 10 as we defend our home against the Edmonton Eskimos in the Eastern semi-final. See you there for our FIRST sold-out game of 2019? 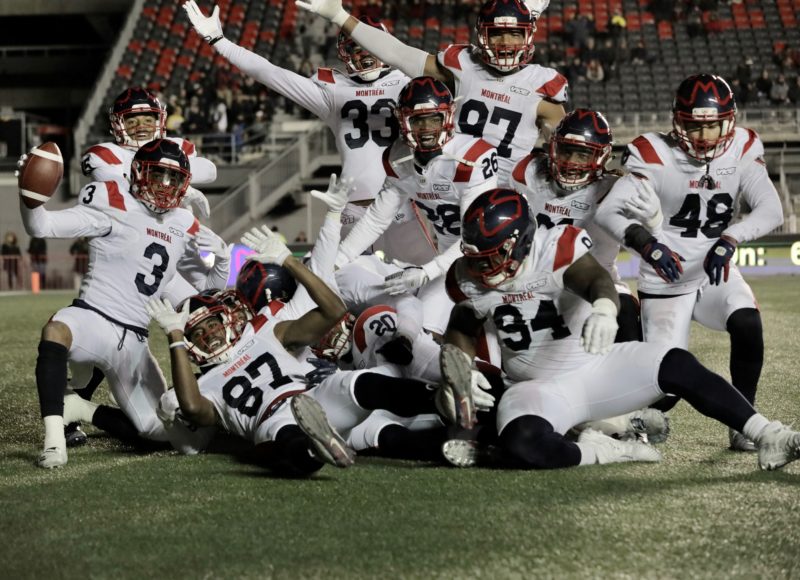