A win that lived up to expectations

A win that lived up to expectations

Alta alatis patent: “The sky is open to those who have wings.” Beaten and bruised in Manitoba last week, our Als took all means necessary Friday night to fly high on Mount Royal and claim victory.

As was the case in Moncton when the Als and the Argos met earlier this season, Friday night’s matchup kept us on the edge of our seats until the scoreboard read triple zeroes.

With only two seconds left on the clock the Argos tried to tie the game, but kicker Tyler Crapigna’s 51-yard field goal attempt fell short, giving our boys a 27 – 24 victory.

Even though the game had no bearing on the Als’ playoff positioning, our guys still had a lot to prove to themselves. And that’s exactly what they ended up doing.

After a tough game in Winnipeg, quarterback Vernon Adams Jr. showed his character should never be questioned. Never.

While some quarterbacks might have a hard time rebounding after a game during which they threw four interceptions, the story was much different for Montreal’s field general.

Calm, collected and in control: Our number 8 dictated the rhythm of the Montreal offence from start to finish, using all the weapons at his disposal as well as making good use of his own rushing skills when time called for it.

Three touchdown passes, 249 passing yards and no interceptions. The numbers speak for themselves. And that’s not counting the 44 rushing yards when Vernon took matters into his own hands. We got to witness on the Percival-Molson Stadium turf the magic that only he can create.

Inspired by their QB’s performance, our quintet of offensive linemen did a sensational job of protecting as well as opening large holes for our ball carriers to run through. The O-Line often goes unrecognized, and they deserve lots of praise for their performance Friday night.

There’s no doubt that our dynamic running back is ready to be a key component of the offence when the playoffs start in November. 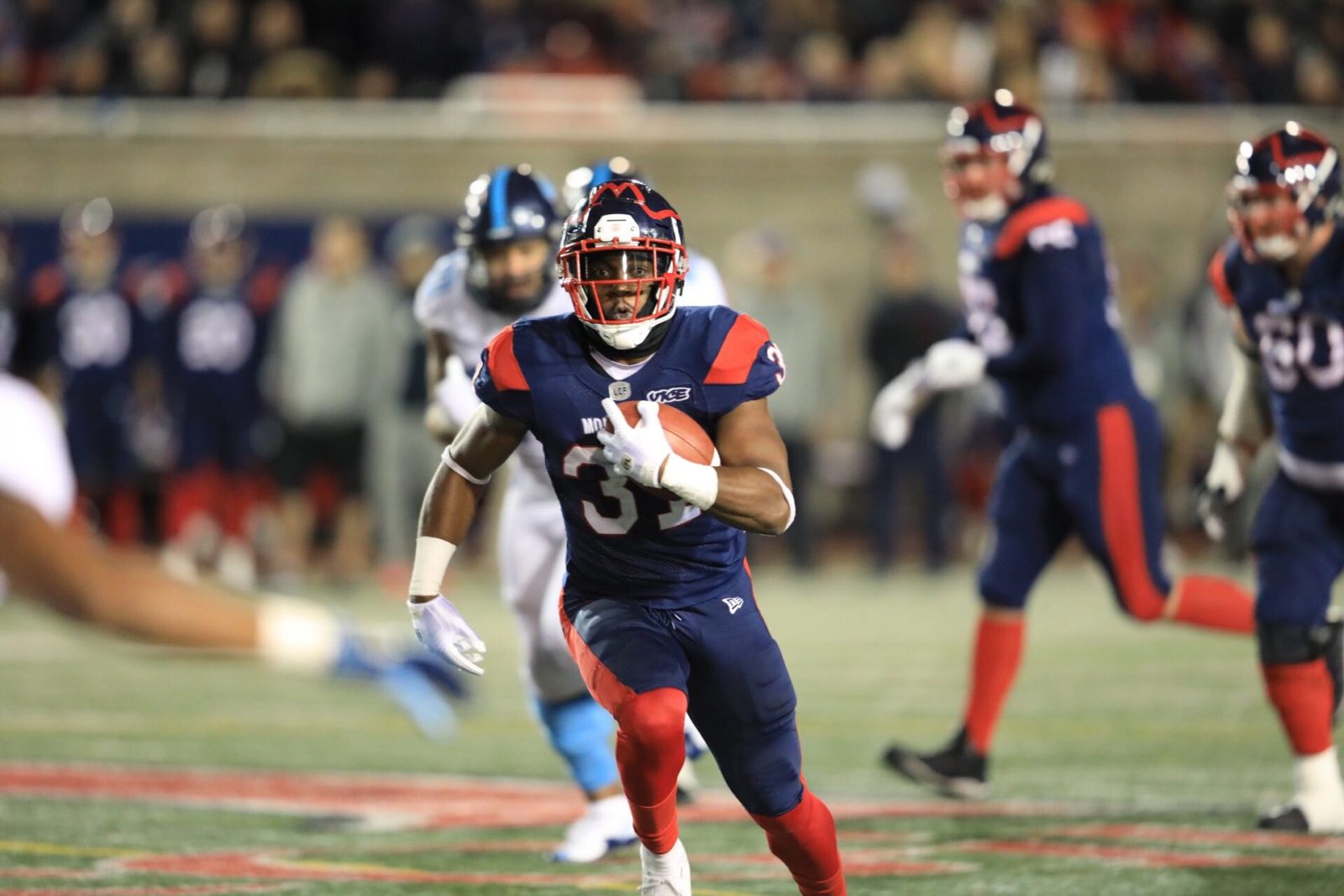 With the Als leading 13 – 3 at halftime, the Argos came out with guns blazing to start the third quarter. It sure seemed as though they didn’t like having their field goal attempt blocked as time ran down at the end of the first half.

After notching their first touchdown of the night on a one-yard quarterback sneak, Argos quarterback Mcleod Bethel-Thompson found former Alouettes great S. J. Green in the end zone, giving the visitors a 17 – 13 lead.

But our guys never panicked. They simply regrouped. The defence did what it had to do, and the offence showed their appreciation.

Replacing Stanback in the fourth quarter, Jeremiah Johnson showed off the full extent of his talents with an impressive 45-yard catch and run touchdown that gave the Als the lead back at 20 – 17. There can be no doubt: The best running back tandem in the league is right here in Montreal.

On the next offensive series, Adams Jr. moved the ball effectively, including a spectacular 28-yard scramble that set the stage for wide receiver Quan Bray’s fifth touchdown of the season. A pinpoint precision 18-yard completion for the TD that gave the Als a two possession lead.

The Argos then narrowed the gap with a Chandler Worthy touchdown grab with less than two minutes left to play in the game.

Our defensive front was constantly making life miserable for the Argos quarterback, leaving him with little to no time to make sound decisions. Just to give you an idea, after 30 minutes of play the Toronto QB was limited to 99 yards passing.

But it wasn’t only Bethel-Thompson who was being harassed by our defence. The ever-dangerous Argonaut running back James Wilder Jr. was limited to 39 rushing yards, as he was constantly finding his routes clogged-up by our staunch defence.

What a night: Our sixth home win this season, and the first time in five years that the team has reached the nine-victory mark.

Our guys are back in action Saturday, October 26 when the East Division leading Hamilton Tiger-Cats will be in town. A showdown at the foot of the mountain that could be a precursor to the East Division final!