The Win Slipped Through our Fingers in BC

The Win Slipped Through our Fingers in BC

The final outcome of Saturday night’s game with our Alouettes going up against the Lions in BC came oh-so-close to ending on a different (and more positive) note. Our “Cardiac Kids” once again delivered a terrific performance in yet another nail biter: For the seventh week in a row, the final score had less than a seven point differential.

With one minute and 10 seconds to go in the game, head coach Khari Jones opted to place his confidence in back-up quarterback Antonio Pipkin, calling for a quarterback sneak on third down with a yard to go for a touchdown. It was a gutsy call, but the strategy worked successfully with Antonio earlier in the game so there was logic behind the coach’s decision. A successful third down sneak would have given the Als a comfortable lead and, ultimately, most likely the win. Unfortunately, it all went south when the ball came free of our quarterback’s hands… the plan backfired… giving the Lions a 25 – 23 victory.

“We have been very good on our third and ones to that point,” Jones said. “With the time left on the clock and a guy like Mike Reilly on the field, leading by one point was going to be a little tough. I feel comfortable with the call and I would call it again.” 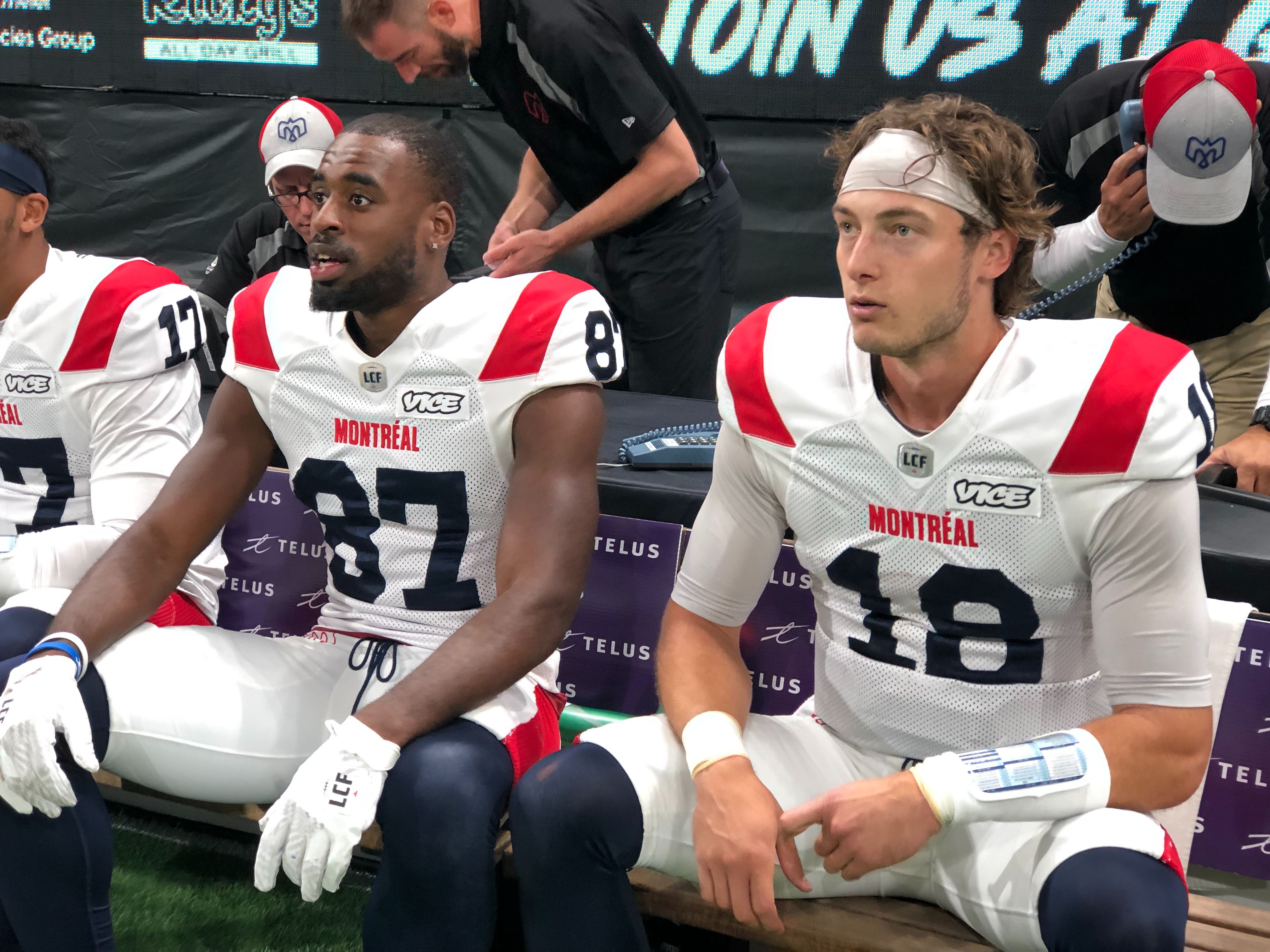 Unquestionably, it was quarterback Matt Shiltz who surprised us the most on Saturday night. Matt, who was given the keys to the offence while Vernon Adams Jr. completed his one-game suspension, was able to prove his naysayers wrong.

Starting the game with a quick stop by our defence, during which John Bowman had the first of his two sacks, Shiltz immediately showed that he was in control. He twice found DeVier Posey for 36 yards in total, setting the stage for Boris Bede and an easy field goal for the first points of the game. After 30 minutes of play, the teams went into their respective locker rooms with the Lions ahead 9 – 3, with both squads’ defences leading the way and the kickers the only ones having put points on the board.

Bowman, whose father made his annual trip to Vancouver, made what TSN referred to as his first-ever interception in his long and storied career. However, John stated on air that he believes he once had a pick years ago in a playoff game.

We couldn’t help but ask ourselves what Khari Jones said to his players in the lockerroom during halftime because once again our Alouettes came out flying in the third quarter. In the first half, Matt Shiltz was sacked four times and threw for a paltry 67 yards. It was easy to conclude that this wasn’t going to be Matt’s night, but the offence clearly believed in him. Just six seconds into the third quarter Matt found Geno Lewis completely uncovered and the play resulted in a 97-yard pass and run touchdown. The play returned the momentum – and the lead – to our Alouettes.

Will Stanback and Jeremiah Johnson effectively moved the chains with their combined rushing. Will finished the game with 147 rushing yards on 14 carries, for an impressive 10.5 yards per carry average. Jeremiah, meanwhile, who wasn’t used quite as often, was also effective on each of his three carries, finishing the game with an 8.7 average. And even though our two running backs are terrific rushing the ball, the same can be said of Matt Shiltz. Our back-up quarterback’s rushing skills reminded us of Vernon Adams Jr.’s explosiveness on several occasions. In the third quarter, Matt ran for 29 yards on one play and was stopped just short of the end zone, enabling Antonio Pipkin to finish the drive with a quarterback sneak from the one-yard line that increased the score to 17 – 9 in favour of our guys. 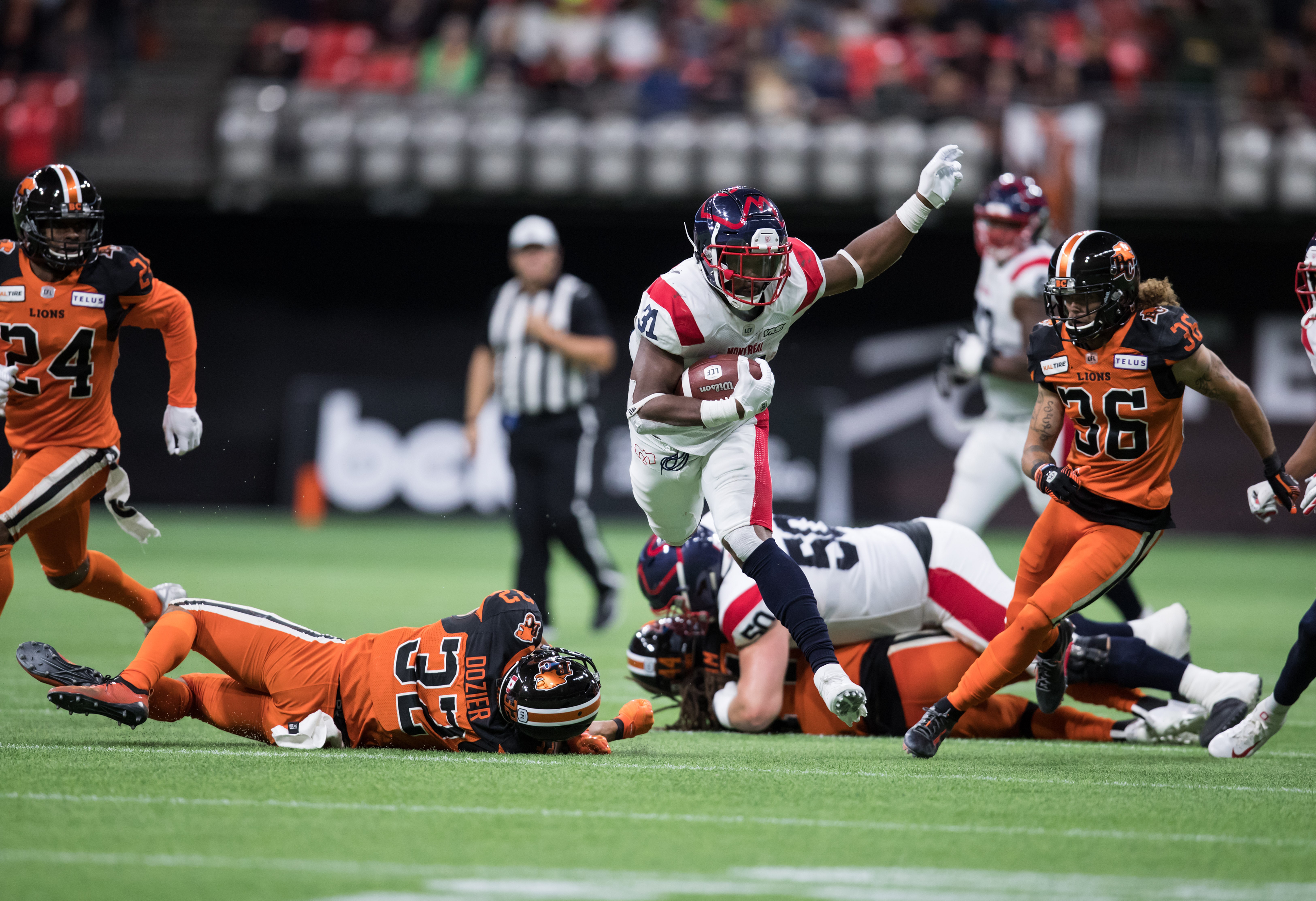 The Lions, however, quickly retaliated. First with a touchdown by the Mike Reilly – Bryan Burham tandem, then with a long play that was kind of… weird. Reilly connected with his receiver Lemar Durant for 61 yards, but it wasn’t because our secondary unit was asleep at the switch. Jarnor Jones was in perfect position to knock down the pass, right up until he collided with the referee. Or, was it the referee who collided with Jarnor? A few plays later, Lions running back John White notched his team’s second touchdown of the evening. With a little more than 14 minutes still left in the game, our Alouettes were only behind by five points, which was no big deal in light of the way our games have been going this season. A Sergio Castillo field goal then made it an eight-point deficit.

What then followed was a classic example of our Alouettes’ footprint for 2019: A finish to the game that either took your breath away or, gave you cardiac arrest! Stanback, Pipkin and Shiltz each had crucial rushes. Between the three of them, they had 71 yards on the ground during one drive that finished off with a Shiltz 7-yard touchdown. Our quarterback then found DeVier Posey in the end zone for a two-point convert that, somewhat strangely, was nullified by the referees who judged the pass to be incomplete.

We were behind by two points with two minutes left to play when Fabion Foote made one of the – if not the most – crucial plays of the game. The defensive lineman blocked a Castillo field goal attempt, thereby maintaining a two-point deficit. And it was right about then that the fumble aforementioned happened.

The disappointing final score, however, was not indicative of the effort put forth by Khari Jones‘ players, and, definitely not reflective of Matt Shiltz’s performance. The offence accounted for 425 yards in Vernon Adams Jr.’s absence. It’s safe to say we can (finally) declare an end to the era of the Alouettes searching for a quarterback.

Our guys will be back at home on Saturday, October 5 for an important game against the Calgary Stampeders. Remember, the Als beat the Stamps in Calgary earlier this summer. We’re guessing our opponents have not forgotten…