So THAT was the key to beating the Ticats: giving the ball to Will Stanback. To say his performance was outstanding is an understatement. The running back rushed for 203 yards and scored three touchdowns last night to help our team win its rematch against the Hamilton black and yellow 36 to 29. He also became the first Alouette to run for more than 200 yards in one game since Mike Pringle in 1998.

“My confidence continued to build throughout the game and I had the guys rallying behind me, pushing me to run harder and harder every play,” Will told the media after sprinting all over the Ticats defence. “I had the good team to let me ride on my first big plays, the good team to build on them. We kept our foot on the pedal until the end and understood that the game wasn’t over until there were zeros across the board.”

So our Als came out strong for their first home game of the season and we must admit IT FEELS AWESOME! A first W for Khari Jones who, despite being catapulted at the Head Coach position, clearly has the respect and control of his locker room. He took some risks last night, showed creativity, proved he trusted his kicker and, mostly, he focused on the run game to beat the Ticats defence.

“I like the makeup of our team and I said that from the beginning. I saw some opportunities to make plays with these guys and we just made more this time than in the first two games,” Coach Khari said in his post-game press conference. “If we can run the ball for 200 yards every week, then let’s do it, but I just want to be a team that does whatever needs to be done to win football games.” 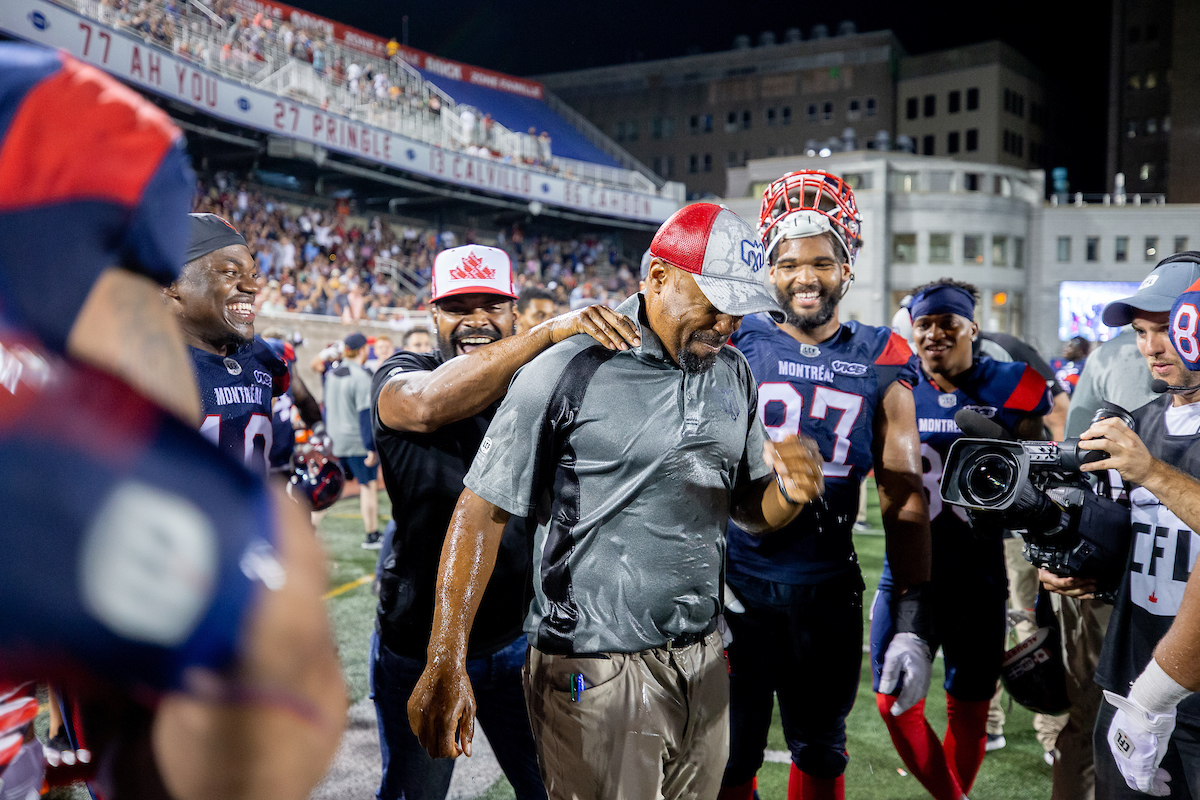 Let’s just say Simoni Lawrence – who could be heard signing from the top of the stands during the warm-up – was abnormally discrete once the game started. If Will Stanback was able to be so dominant, it’s in good part thanks to the work done in protection by the O-linemen. Were they particularly motivated to give LBJ a proper retirement gift? Absolutely and it worked. The results speak for themselves: the line created space for our RB to run wild and allowed only one sack on QB Vernon Adams Jr. HUGE progress was made in one week! Who knows… maybe our gentle giant will want to come back after this 😉 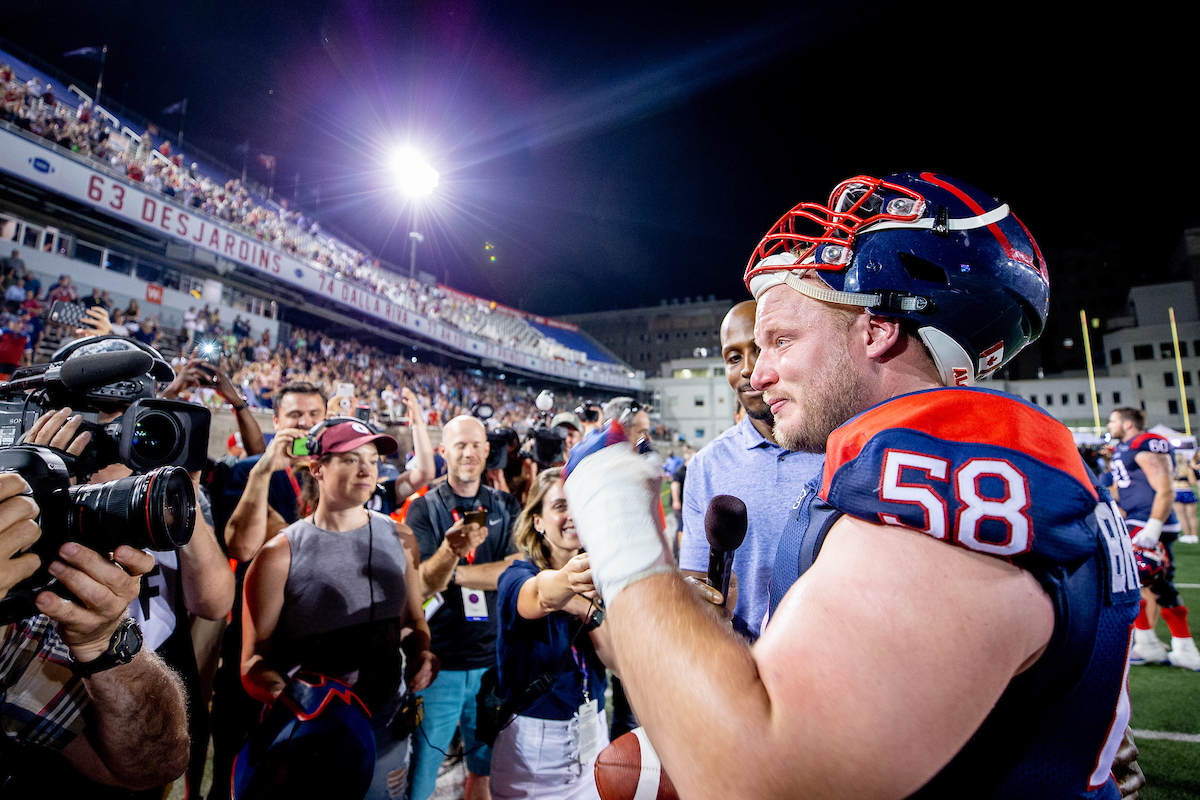 As a matter of fact, Will pointed out the physicality of the big men up front. “Those boys were all up in their faces and that’s what we need, that’s our identity and the swag we want to have each and every game. It was important for us to prove that we could do it with Hamilton being the top seed in the East. We wanted to get a first win, especially being at home, and make it extra special for Luc.”

At receiver, Auburn alum Quan Bray stood out. We told you to keep an eye on him, didn’t we? New players are often quite the threat for opposing teams since they don’t have enough film to really know what to expect from them. Plus, Quan is obviously very talented. Our explosive number 4 showed off his skills at training camp and it was only a matter of time until he was called to suit up. He was the most targeted receiver, with 54 yards in eight receptions. 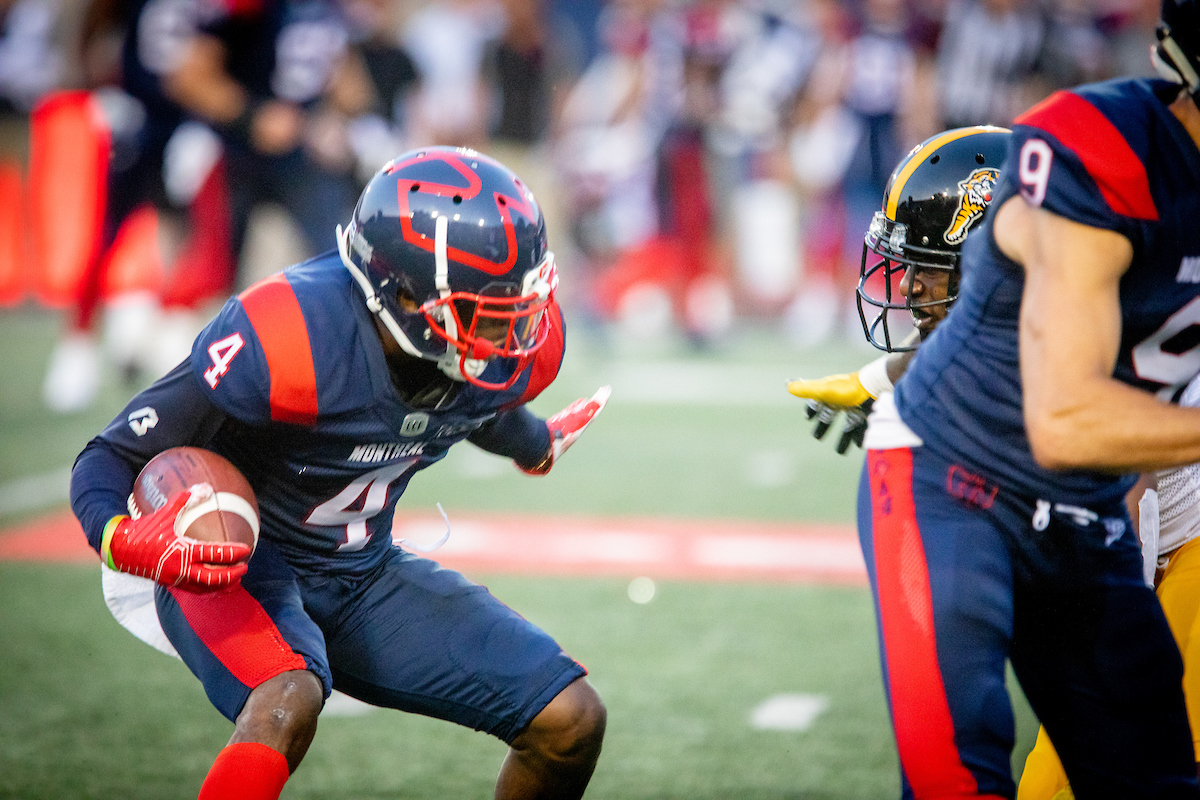 “I’m built to maintain. Once it’s my time to go, it’s my time to go,” said Quan who had a feeling he wouldn’t be stuck on the practice roster very long. “We just gave the fans a little taste of what we can do tonight. There were a few mistakes here and there, but it’s only the beginning.”

On offence still, BJ Cunningham was reliable, as usual. He didn’t get the ball as often as we would have imagined, but he made every catch count. In the third quarter, he propelled the team in Ticats territory after turning a short pass from Vernon Adams Jr into a big 46-yard play (39 after catch). During his interview on Le Survol, BJ spoke about the importance of getting those extra yards. They really do make a difference. BJ’s play was the first of the drive that allowed Will to score his second touchdown, placing our Alouettes back in front of the race.

The @MTLAlouettes were stopped on first down from the HAM 1, that wouldn't be the case on second down!!!

But a win wouldn’t have been possible without the relentlessness of the defence and special teams. Coach Jones is proud of his entire crew.

“The defence also stepped up and we saw some good things on the special teams. It was really a team win and that was important. In the second half, the defence had a few two and outs and that was something big for us. We had talked about getting involved in the second half and being able to stop Hamilton’s momentum and getting our own. I think it was a turning point in the game. I was very proud of the whole group.”

The first guy to shine on the defensive side was Glenn Love. The linebacker who is currently filling in for Bo Lokombo made an early pick that seemed to set the tone for the game. After Boris Bede successfully capped off our first offensive drive with a 3-pointer, our Als quickly got the ball back, particularly encouraged to capitalize on Love’s turnover. And that’s exactly what they (notably Will Stanback) did by carrying the ball home for the first time of the night.

TOUCHDOWN Stanback!!
The @MTLAlouettes have come to play tonight

Pat Levels, who made six tackles, was especially pumped to get a win in his new uni. The speedy linebacker who was picked up during the free agency period was heard yelling This is our house numerous times from our Alouettes bench. Ryder Stone proved there are other promising Canadian RBs in this league by excelling on kickoff returns and in protection on punt returns. 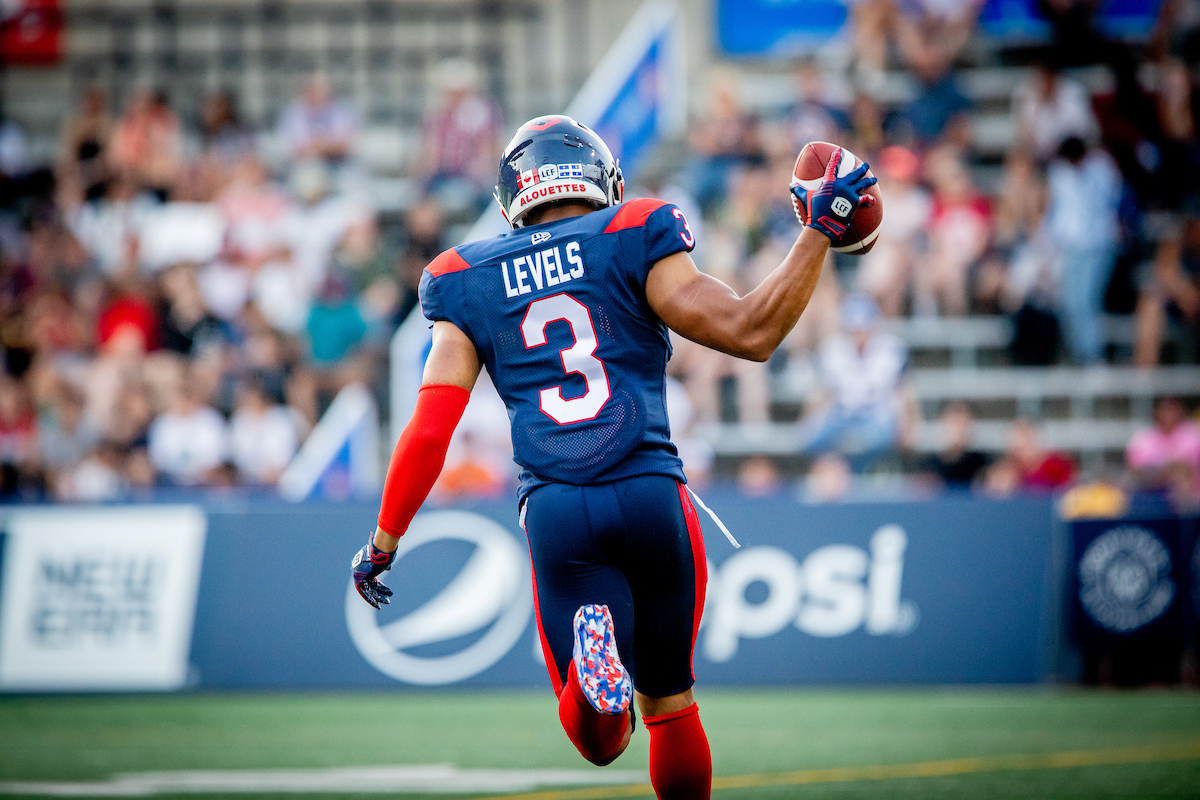 See you on Saturday, July 20 for Family Day as we take on the Edmonton Eskimos! Feel like getting out of the city? Book your seat on the Fan Bus and come watch us play in Ottawa next week.