A First Test for the Rookies in Toronto

A First Test for the Rookies in Toronto

Our Alouettes completed their first test on Thursday morning at Toronto’s charming Varsity Stadium, much to the pleasure of a highly enthusiastic crowd of students. Sporting their brand-new white New Era unis for the very first time, our boys went to work applying some of the schemes and notions they’ve learned over the past weeks at camp in a matchup dominated by the Argonauts.

True to the preseason tradition, a small bunch of our star players – like BJ Cunningham and Eugene Lewis – made a few appearances in the first quarter, but it was mostly the rookies’ time to shine and to prove that they had the potential to help the team in the short or medium term. As a matter of fact, the defensive squad as well as the special teams were nearly entirely composed of young players experiencing their first pro game. 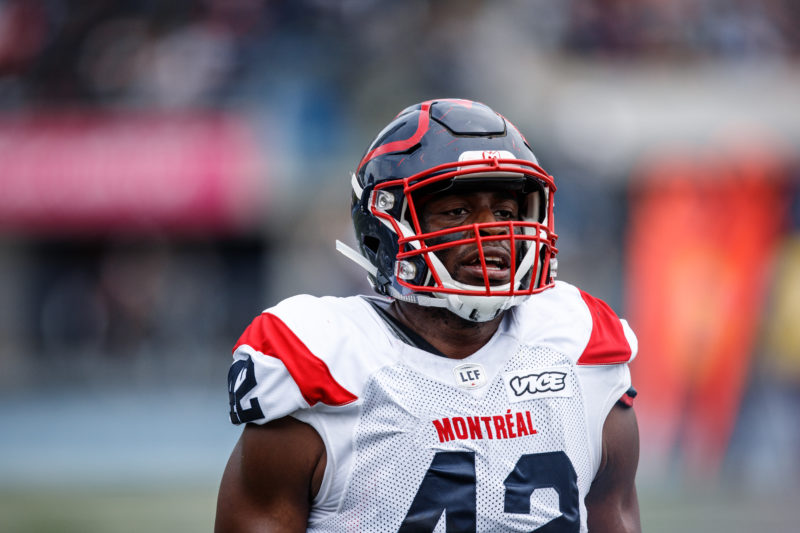 Looking at the final score (45 to 20), it is clear that improvements still need to be made, particularly in terms of countering our opponents’ passing game. The Toronto QBs easily found their deep threats, accumulating 455 yards through the air. “Our defensive line is going to have to put a lot more pressure on the quarterbacks and our defensive backs will have to execute tighter coverage on the receivers,” admitted veteran Jean-Samuel Blanc in a post-game interview on Thursday.

DD Marcellus Pippins made sure to get noticed like he has been at camp since his return with the team. The 24-year-old cornerback who spent a few weeks with the practice squad in 2018 made the pick-six of the game, returning the ball on 31 yards at the beginning of the fourth quarter. 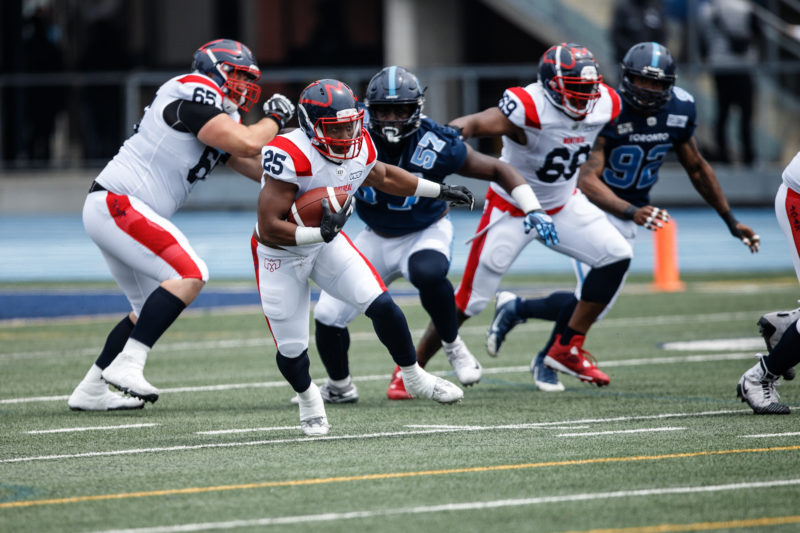 Quarterbacks Matt Shiltz and Vernon Adams Jr also contributed to adding points on the board. After Antonio Pipkin and Jeff Mathews battled up against what could likely be the Argos’ starting lineup without opening the score, Shiltz and Adams got to work alongside many rookies such as Asnnel Robo, Josh Cleveland, Malcom Carter, Zac Parker and Chris Osei-Kusi.

Rushing on 32 yards with sharp cuts to avoid two Toronto defensive backs, Shiltz carried the ball home to grant our Alouettes their first six points of the game. In the spirit of testing, the Shiltz-led offence attempted the two-point conversion in vain.

Vernon Adams Jr, on the other hand, completed a short eight-yard pass in the slot to Canadian receiver Malcolm Carter. Carter, who was dressed only six times in 2018, could be part of the equation, especially if no national player was able to crack the starting defensive line. The 6’6 receiver made a smooth one-handed catch and rushed on eight yards to score our Alouettes second touchdown. After the matchup, Carter said he had been training hard in the off-season to put on some weight in order to be able to go up against the most imposing linebackers and DBs of the league.

The coaching staff will have a lot of work to do in the next few days to make the necessary adjustments. Head Coach Mike Sherman admitted that he expected his squad to perform better, but he insisted on reminding the media and the fans that this initial preseason game was really just a first test and that many of his weapons – John Bowman, Henoc Muamba and DeVier Posey, notably – were not solicited on Thursday. As for the four quarterbacks, we can most likely expect to see them again on the field at the second and last preseason game on Thursday, June 6, at McGill Stadium