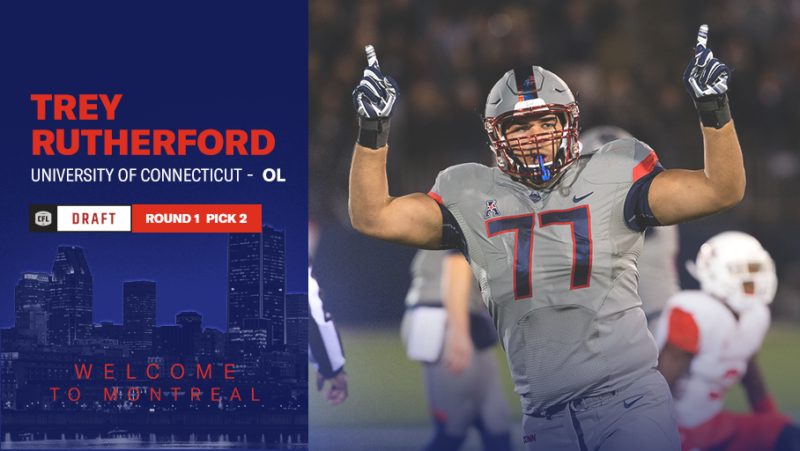 Rutherford (6’05”, 289 lbs) lands in Montreal after a remarkable four-year collegiate career suiting up for 44 regular season games with the Huskies, including ten as a true freshman in 2014. The versatile 23-year-old saw action at fullback, as well as both guard and tackle spots, but considers guard as his natural position. The Markham, ON native concluded his university career playing in the NFLPA Collegiate Bowl on Jan. 20 at the Rose Bowl in Pasadena, CA.

“We are getting the player that we had been targeting for a while, he is a big guy and he will strengthen our offensive line immediately,” said Montreal Alouettes’ General Manager Kavis Reed. “According to our scouts, he will play an important role in protecting our quarterbacks for years to come.” 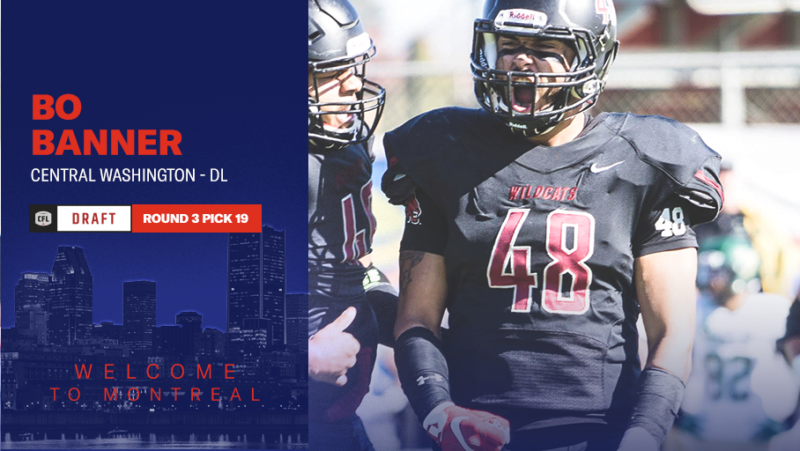 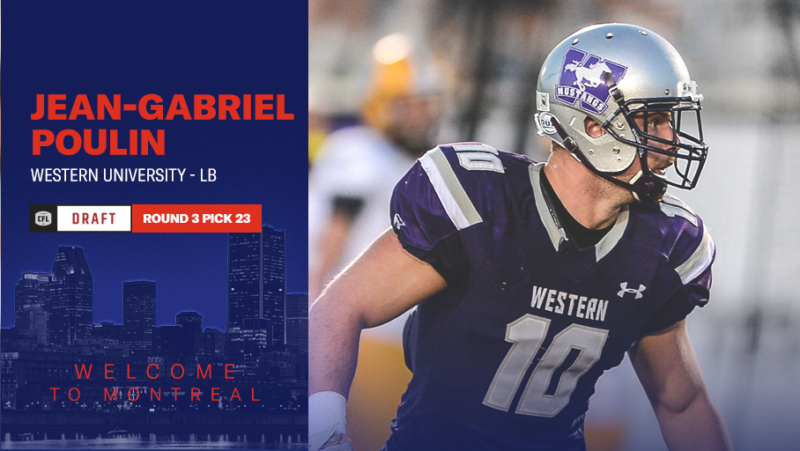 With the second pick in the third round, the Alouettes dipped into the defending Vanier Cup champions Western University Mustangs pool of talent, as they selected linebacker Jean-Gabriel Poulin. In 2017, the Saint-Nicolas, QC native was named an OUA All-Star for the second year in a row and earned a first-team all-Canadian selection. 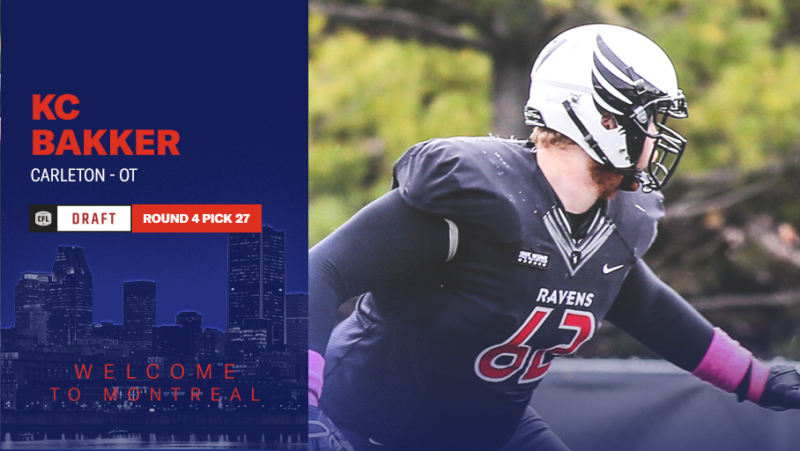 In the fourth round (27th overall), Montreal selected offensive lineman KC Bakker of the Carleton University Ravens. The 6’8” and 320 lbs. giant was part of a Ravens‘ line that helped running back Nathan Carter earning 1,110 rushing yards in just eight games, the second-highest total in the country. The line also allowed rookie quarterback Michael Arruda to throw for 2,146 passing yards and become the second rookie in the program’s history to pass the 2000-yard mark. 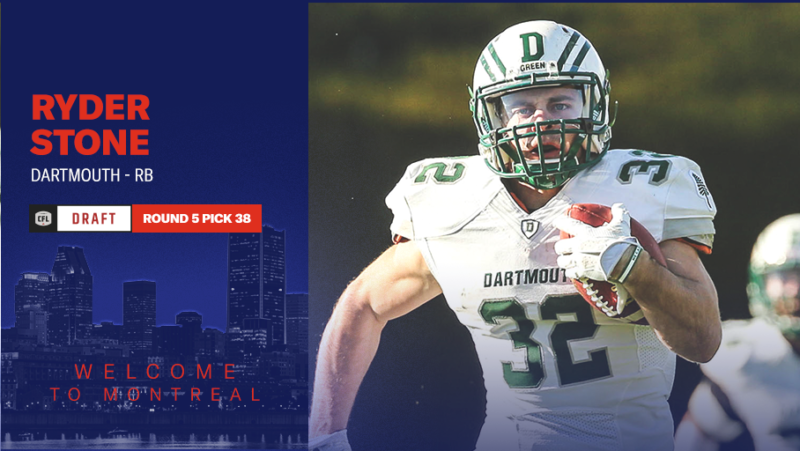 The Alouettes traded their second pick in the fourth round (34th overall) to the BC Lions against their fifth-round (38th overall) and sixth-round (46th overall) picks. With the 38th selection of the auction, Montreal selected running back Ryder Stone from the Dartmouth University Big Green in the Ivy League. The Calgary, AB resident gained 1,502 yards on 309 runs and added 20 majors during his time in New Hampshire. He also caught 46 passes for 469 yards and a major. 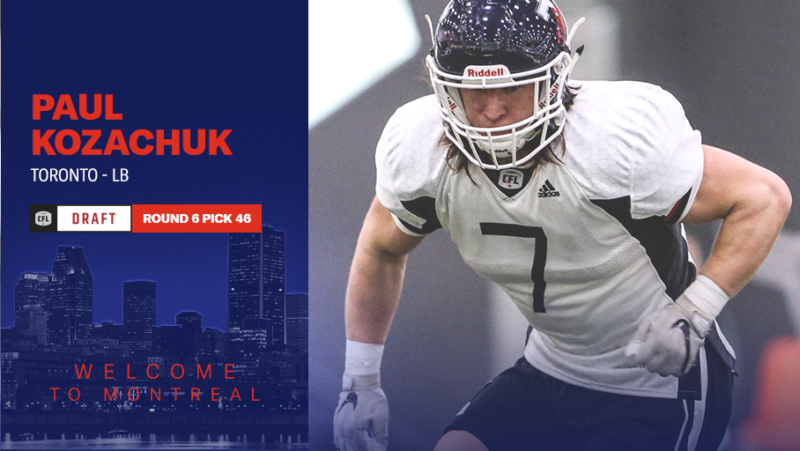 The Alouettes chose Paul Kozachuk with the 46th pick. The London, ON, native played four seasons with the Varsity Blues at the University of Toronto. Last fall, he finished second in his team with 53 tackles, two forced fumbles while recovering one. 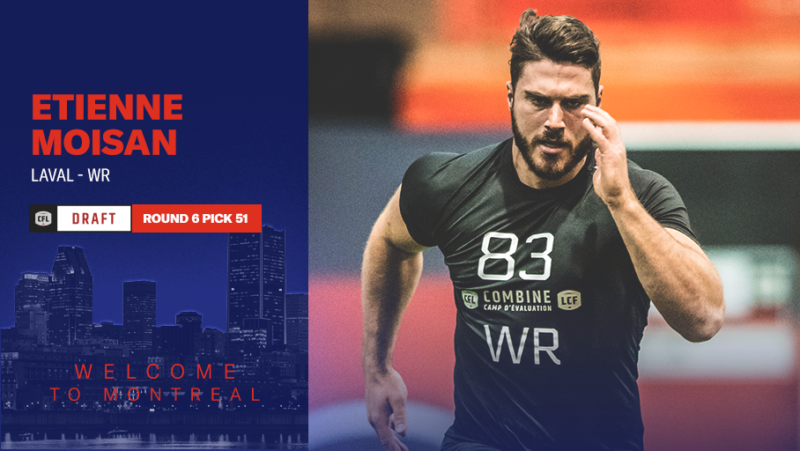 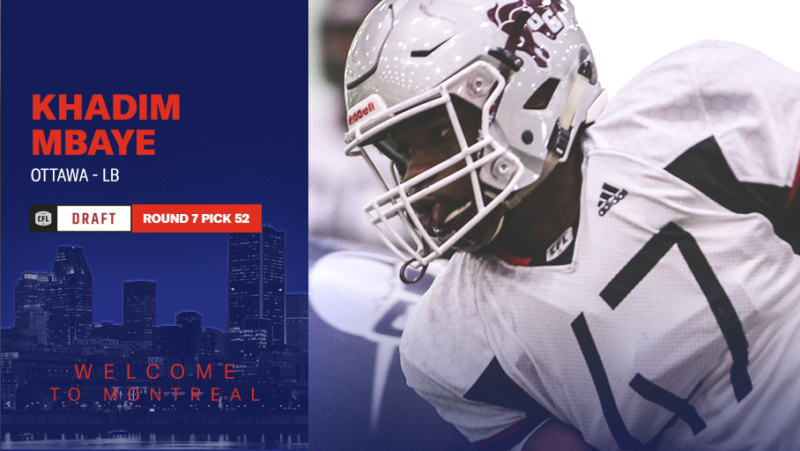 Immediately after, with the 52nd choice of the evening, Montreal drafted defensive lineman Khadim Mbaye of the University of Ottawa Gee-Gees. The Laval native collected 39.5 tackles, 2.5 sacks and one interception last fall. 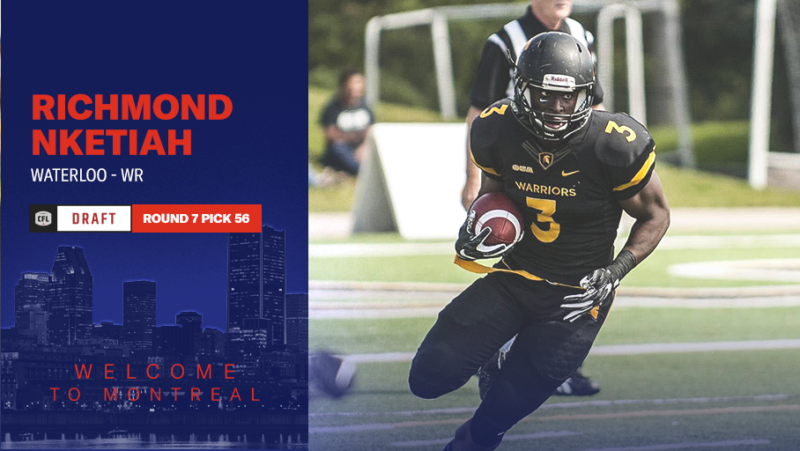 With the 56th selection, Montreal picked the Waterloo University Warrior receiver Richmond Nketiah. In 2017, he had 15 receptions for 171 yards and gained 58 yards on four rushes. 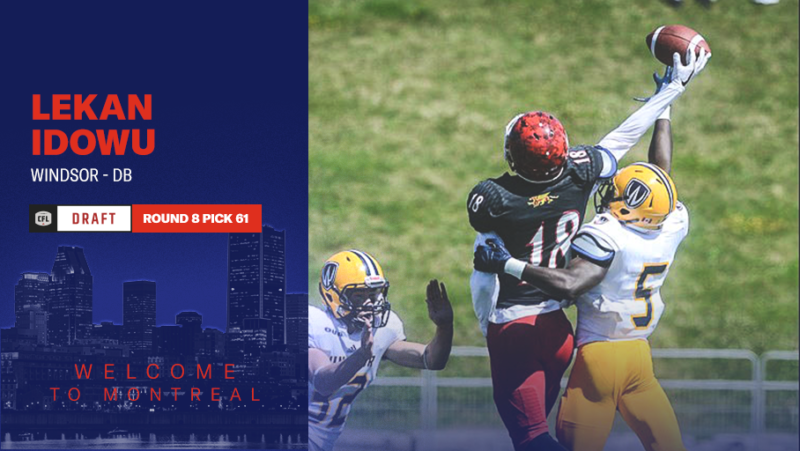 Then, with their final choice of the evening in the eighth round (61st overall), Montreal selected defensive back Lekan Idowu of the Windsor University Lancers. He completed the 2017 campaign with 24 tackles.