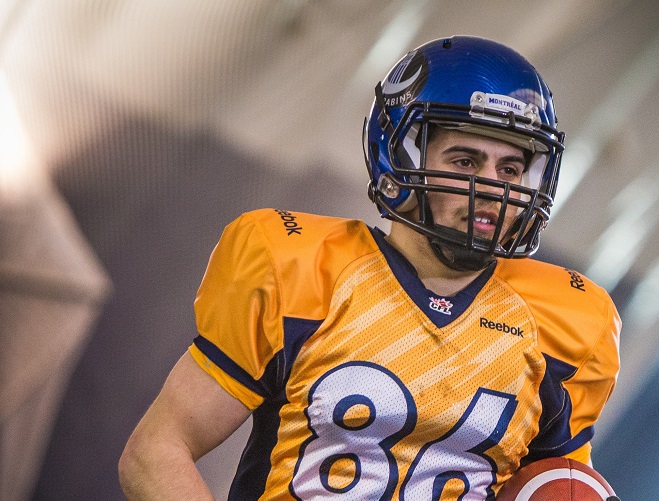 Montreal – The Montreal Alouettes selected defensive back Chris Ackie with their first pick (fourth overall) in the first round of the CFL Canadian Draft.

Ackie (6′,2″, 205 lbs.)  played four seasons with the Wilfrid Laurier University Golden Hawks. In 2014, the Cambridge, ON native amassed 48.5 tackles in eight games, all while adding a sack, an interception and three pass knockdowns, which led to a first-team all-Canadian nomination. The 23-year-old completed his university career with 129 tackles.

Ruby (6’7”, 315 lbs.)  suited up for the University of Richmond Spiders for four seasons where he started 47 of the 48 contests for his team. The 22-year-old athlete earned All-CAA Third-Team honours in his senior year. The London, ON native attended the New York Giants rookie mini-camp earlier in May.

In the second round (13th  overall), Montreal selected linebacker Nicholas Shortill (6’2”, 223 lbs.) who racked up an impressive total of 121 defensive tackles, including 104 unassisted and eight quarterback sacks in 26 contests as a McMaster University Marauder. During his four-season collegiate career, the 22-year-old linebacker notched four interceptions. The Nobleton, ON native was named a CIS second team all-Canadian as well as an Ontario University Athletic first all-star team. He raised the Vanier Cup as a Marauder in 2011.

With their third-round pick (24th overall), the Alouettes picked offensive lineman James Bodanis (6’5″, 297 lbs.) who made the switch from the defensive line to the offensive line prior to his senior year with the Michigan State University Spartans where he played four games. The 23-year-old formerly played in his hometown for the University of Toronto Varsity Blues as a defensive tackle.

In the fourth round (31st overall), the club selected quarterback Brandon Bridge (6’5” 235 lbs.) . The former South Alabama Jaguars’ pivot played 20 games over the course of the last two seasons, recording 2,325 passing yards and 16 touchdown passes. The 23-year-old quarterback added five rushing touchdowns and 467 rushing yards on 138 carries with the Jaguars. The Mississauga, ON native sat out the 2012 season after transferring from Alcorn State University, where he threw 24 touchdown passes while scoring eight rushing touchdowns on 120 carries over the 2010 and 2011 campaigns.

With their second pick of the fourth round (36th overall), the Alouettes opted for Guelph University receiver Alex Charette (6’1″, 200 lbs.), who led the Gryphons with 49 receptions in 2014. The 23-year-old completed the season with 567 receiving yards while scoring six touchdowns, earning himself a OUA second-team all-star selection. In 2013, he was voted the team’s co-MVP.

Mikhaïl Davidson (5’8”, 175 lbs.) was drafted in the fifth round (40th  total). The Université de Montreal Carabins receiver led his team last season with seven touchdowns and 769 receiving yards. He added 72 rushing yards and a score in nine carries. The dynamic Montreal-native played on a regular basis on special teams racking up 49 yards on four kickoff returns as well as a touchdown and 287 yards on 30 punt returns. In addition to lifting the prestigious Vanier Cup in front of friends and family last year, Davidson was named a RSEQ all-star and a CIS first team all-Canadian in 2014.

With its final pick of the night, the Alouettes selected a second member of the 2014 Vanier Cup champion edition of the Université de Montréal Carabins, when defensive back Anthony Coady (5’10”, 190 lbs.) was selected in the seventh round (57th  overall). The 23-year-old was named a RSEQ all-star following a season where he cumulated 14 tackles while adding an interception and knocking down a pass. He received that same honour in each of his last three seasons. During his first two university campaigns, he was coached by current Montreal Alouettes defensive coordinator Noel Thorpe.